How I Snapped My Big Buck Losing Streak

I was 0 for 6 on mature whitetails, until I finally fixed these key mistakes 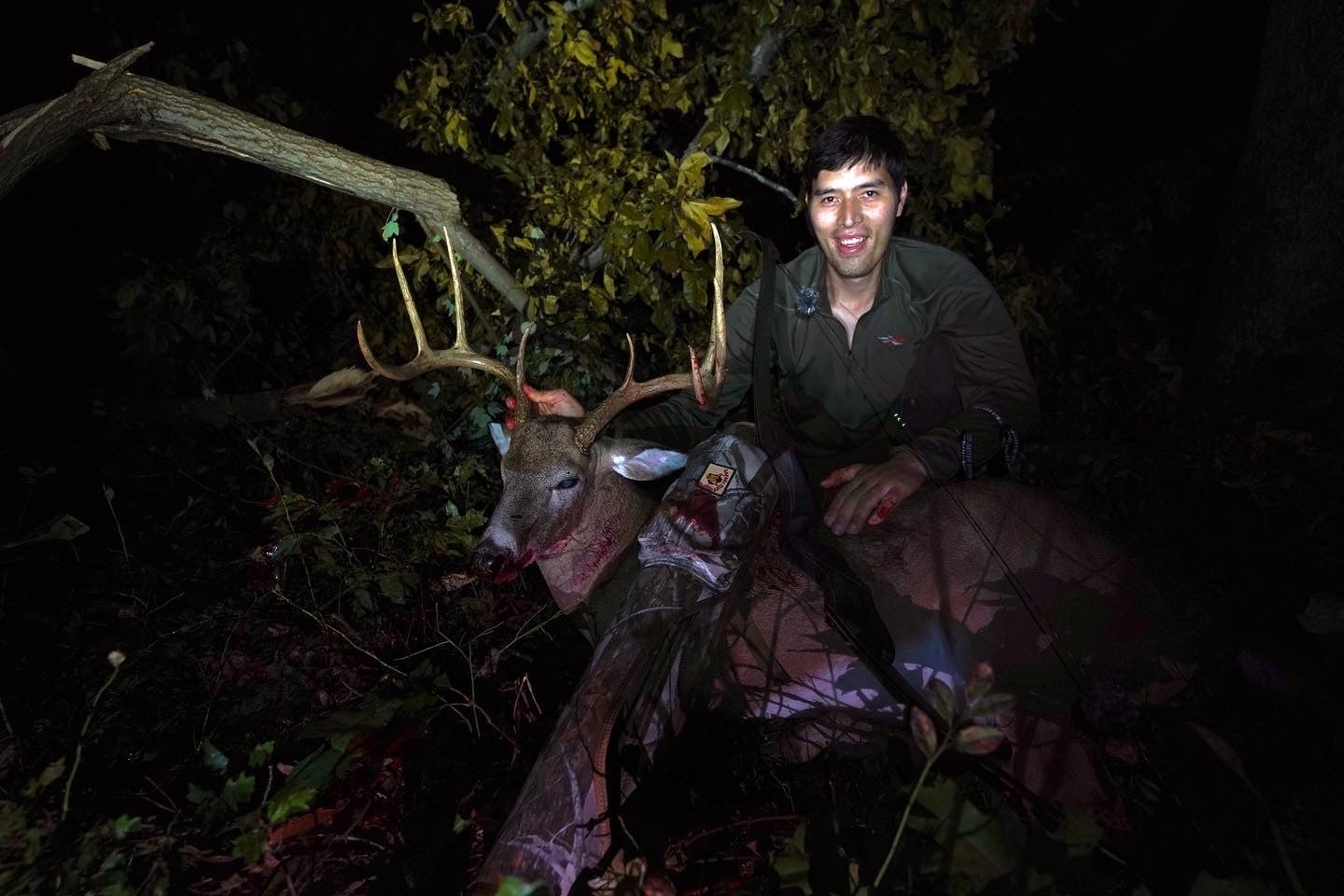 The author and the biggest whitetail of his life. Scott Einsmann
SHARE

The memories of big deer that I’ve had within bow range, and failed to kill, are as fresh as the day they were made. Each one is accompanied by a stabbing pain in my gut and a clear vision of the blunder. I’m not talking about variables beyond my control, like the wind swirling or a hot doe pulling a buck out of range, I’m talking about boneheaded mistakes on my part.

I think most bowhunters can relate to blowing a shot and even being slow to learn from mistakes, but I hope that most have not experienced the incredible streak of screw ups that I have suffered. However, after six encounters with mature bucks, I started to fix the broken link in the chain—me. Here’s what I learned from all those blunders, and what you can learn from them too.

I grew up in south western Connecticut where deer populations are high, but hunting opportunity is limited. I also grew up in a family where I was the only person interested in bowhunting, so I didn’t really start hunting until I could drive and I didn’t start figuring it out until after college. Sure, I wanted to shoot big deer, but they were something that I had only seen on TV. At that point I was happy to kill a doe or young buck, so that’s what I did.

That all changed over one Thanksgiving break while shotgun hunting on private land in the eastern part of the state. I set up on the edge of a field where I could see a few hundred yards. In that magic last hour, I spotted a buck work a scape on the opposite side of the field. I could see his antlers reflecting the last bit of light as he nosed the licking branch. Stunned, I watched him disappear behind a hill between me and him. I popped up and bolted for the bottom of the hill, then slowly stalked until I crested the top. He stood there, broadside, just as surprised to see me as I was to see him. I leveled my gun and fired. He bolted for the woods and my disbelief turned to anguish when there was no deer or blood to be found.

There was so much wrong about that day. Setting up on an open field with an open sighted slug gun was dumb. The shot was most certainly rushed. But my biggest mistake was taking a youth model shotgun that I had outgrown and hadn’t shot in years. But like a lot of hunters who aren’t used to being successful, I wasn’t prepared for a real opportunity at a mature buck. I thought that day was going to be like many others; I’d watch some squirrels and the sunset.

I Learned to Be Patient

After college I got access to some choice urban bowhunting properties. I started filling doe tags almost weekly and life was good. While hunting a particularly awesome 80-acre parcel, a group of does were moving fast across the saddle I was set up on. A mature, brute of a doe paused at my bleat long enough for a shot and she didn’t make it 10 yards before stumbling down. I was very excited to kill the large bodied doe. I immediately climbed down and called my hunting buddy to see if he could help me get her out of the woods. While I was standing there talking on the phone, I heard footsteps from the thicket behind me. I turned to see a giant, wide-racked buck that didn’t seem to notice me for some reason. He walked at a 45-degree angle to me and I very slowly put my phone in my pocket and reached for an arrow. I had the arrow gripped in the middle and needed to move my hand closer to the rear to nock, so I loosened my grip and let my hand slip to the rear of the arrow. That movement caught the buck’s eye and without pausing he bolted.

The movement was certainly a mistake, but the biggest noob mistake was not realizing that in early November, does moving quickly are likely being pushed by a buck. If I had the patience to see what was behind the does, I would have been in the perfect position to shoot that giant deer. I never saw that buck again.

Read Next: What It Feels Like to Miss the Biggest Deer of Your Life, at 45 Yards

I think I’ve always had some type of target panic, but I was able to win archery tournaments and kill deer despite it because I shot a hinge with my compound bow and used a clicker on my Olympic recurve. When I switched to a traditional bow, there was no more hiding behind bandaids.

At this point I was living and hunting in Virginia. I was taking full advantage of the large wildlife management areas near my house. I watched a small buck make its way down a trail and then it did the tell-tale look behind. He was staring back at a wild looking buck with a palmated spike and tons of small points on one side and a typical four point on the other side. Those antlers were riding on a large bodied deer. I marveled at the confidence the deer walked with. It wasn’t the spooky caution I was used to seeing in does and young bucks. I watched him skirt the trail I walked in on and he moved just out of bow range. Then he started feeding toward me, getting closer and closer. He stood facing me at 25 yards, my max range. He turned to leave and the next thing I remember is an arrow heading his way. It just skinned his back and skittered to a stop on the leaves behind him. It was covered in grease and a little blood. I felt sick to my stomach as I had so many times before.

I had a version of target panic where as soon as I got close to my anchor I would shoot or as soon I was anywhere near aimed, I would shoot. I couldn’t shoot a complete shot under pressure and that was undoubtedly the reason I missed that buck and several other deer.

During that time I was also starting to compete in barebow competitions, which gave me a way to measure my shooting performance and to practice shooting under pressure. It took me a year of teeth-gritting work to shoot a good shot under pressure. The keys were holding drills (aiming but not shooting) and working on a rehearsed mental shot process.

I Learned from My Misses

I used my new found mental process to shoot personal bests at tournaments and went into the 2020 bow season determined to only hunt with my trad bow. My season started in the same place where I had missed that mature buck a year ago. A symmetrical eight offered a 20-yard shot and I placed my arrow just under its armpit (gap aiming method), anchored, felt my drawing arm elbow come into alignment, I recognized that all my steps were complete, and then watched the arrow sink behind the deer’s shoulder. I heard him crash and even though I had killed more than ten deer with a trad bow, this was the first time I could recall each step of a well-aimed shot. That season I shot two more deer with my recurve with the same result. The monkey was off my back.

I Put It All Together

Throughout the 2022 season I began testing cellular trail cameras for a review and could not believe my eyes when a true giant appeared at one of my urban archery properties. But it was summer and I knew the chances were slim that the wide eight would stick around after he shed velvet. Like many bucks do, he showed up less consistently in mid-September, but I would get the odd picture of him. I knew he was in the area and if I carefully put my time in the stand, I might get a shot. Halfway through my season I had hunted that property twice, and passed on a chip shot at a young ten pointer.

Passing a nice buck is not something I’m used to doing, but I knew that big eight was in the area and I wasn’t done trying for him. Between hunts I was practicing my shot in the yard and, more importantly, my shot process. My archery equipment was perfect. I was hunting with a bow, arrow, and broadhead combination that were tuned so well that I could shoot bareshafts with the same accuracy as my fletched shafts.

One Friday evening with the right wind, I went back to the big eight property. I got there plenty early because I’ve showed up late before only to see a buck under my stand as I approached. In that last hour a small buck approached, and looked back down the trail. I knew what was coming next.

At around 25 yards the buck stopped, and looked up at me. I had my bow in my hand with my elbow resting against my body for support. I didn’t move. The stare off continued and my muscles ached, but I kept still. He tried to faint like he was feeding and popped his head back up, but I had seen that move before. I made the mistake of beginning to draw on a nice eight that was on edge when I was hunting in Connecticut. He was gone by the time I got to full draw.

Just when I thought I couldn’t hold my bow any longer, he moved on and put his head behind a tree long enough for me to shake out my arm. He fed on acorns at about 28 yards, just out of range. While I can shoot arrows consistently into the kill zone of my 3D target at 30 yards, I limit myself to shots under 25 yards. That lesson stems from taking a 30-yard shot at a ten-point buck early in my trad bowhunting career. I was very confident in my shooting abilities, but I shot low, hitting the deer in the leg bone. My arrow didn’t penetrate any deeper than the broadhead and it eventually fell out as the deer ran. I was sick over that shot for days, and wouldn’t make that mistake again.

The light was fading, and I just needed him to make a mistake. Finally he fed my way and then turned to head back the way he had come, offering a 20-yard shot. I ran my shot process and saw the fletching sticking out behind his shoulder as he ran, then heard him crash.

That deer was the result of many lessons learned the hard way. I’m sure I’ll still have more tough lessons to learn. But I at least know that I have the skills and preparation to kill a big buck when it comes into range.