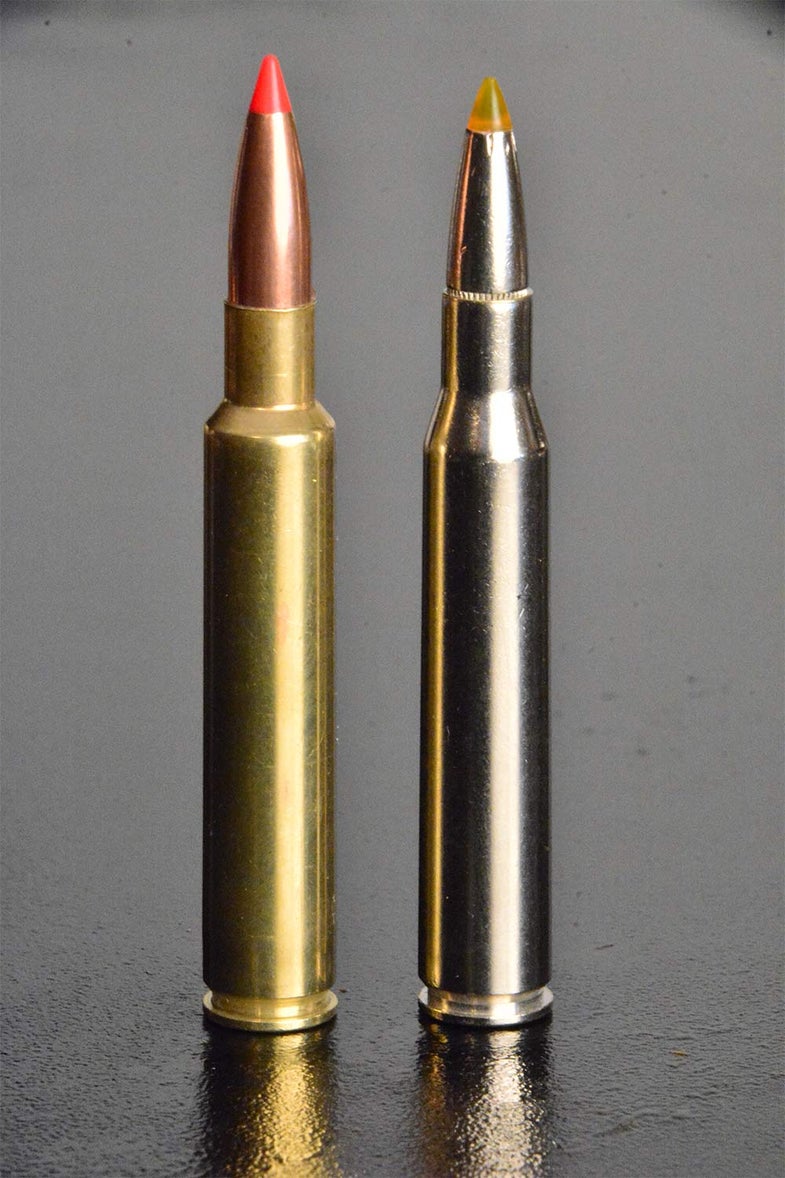 The whitetail deer is the most popular big game animal to hunt in the United States so it stands to reason that a huge number of rifle cartridges are well suited for the job.

To paraphrase Will Rogers, I never met a cartridge I didn’t like and as a gun guy with a hard core interest in cartridges and bullets I have tried to use as many different cartridges to hunt deer as possible. Somebody pointed out that to use them all would require a lifespan longer than Noah, who is reported in the Bible to be 950 years old when he passed. Still, I am no quitter. I could tell you about the performance of obscure cartridges like the .25 Remington or the .309 JDJ, but instead here are my top ten picks of cartridges you have probably heard of.

It’s old, antiquated and out of style yet it still drops deer in vast numbers year after year. There was a time when the .30-30 held a strong dominant position in every deer camp in America. It was said for decades that this cartridge killed more deer than any other and it was no lie. However, I suspect that’s no longer true with the huge numbers of deer hunters today and the preferences for more modern cartridges.

It might be Grandpa’s gun, but facts are facts and the .30-30 still remains in the top ten of ammo sales every year. That means a lot of folks are using this old cartridge to make venison.

My guess this is the new king of the whitetail cartridges and has likely accounted for more deer today than any cartridge. Opinions are like armpits, everybody has them and they all stink except mine. When it comes to whitetail cartridges, those opinions are all over the map. But one thing that any serious gun guy will agree with is that you can never go wrong with the .30-06. From the thick woods of the Northeast, to the Senderos of South Texas or the cold prairies of western Canada, this cartridge gets it done.

This is a long time personal favorite. It was introduced to compete with the .270 Winchester, but poor engineering and bad marketing failed in that quest. While the .270 is much more popular, the .280 is technically a better cartridge. For example, it handles a much wider range of bullet weights. If you are bold enough to get the Ackley Improved version (Factory ammo and guns are available from Nosler) the ballistics rival the 7mm Remington Magnum.

No list is complete without this cartridge. It’s not my favorite, but I learned long ago that stating that opinion in print will ramp up the hate mail to epic proportions. It’s so hugely popular with whitetail hunters that it is in the top five of sales for any ammo company with predictable regularity. Besides, Lanny Benoit might be the best overall deer hunter alive and that’s what he shoots. Who am I to argue with that?

It’s on the lower end of the bell curve of whitetail cartridges, but a lot of hunters use it. It’s the preferred cartridge for new hunters who might be a bit recoil shy and a huge number of experienced hunters use it because it performs.

I remember one crusty old hunter stopping at our deer camp after shooting a black bear and a huge whitetail with a .243. He was bragging about how much he liked it. My uncle said, “It’s got a lot of velocity.” The old guy responded, “I don’t know nothin’ about all that, but I’ll tell you one thing, it’s faster’n hell.”

When hunting big, burly northern bucks, particularly in places where a long shot is a strong possibility, this cartridge shines. Superbly accurate, very flat shooting and powerful enough to dump even the biggest, winter toughened buck.

I am a fan of 35-caliber cartridges and this one might well be my favorite whitetail cartridge, yet American just can’t seem warm up to 35-caliber cartridges. What a pity. This one is holding on, but will never be in the top ten of sales. What mistake that the huddled masses are making. This is an outstanding cartridge. It hits like a bludgeon, but can reach out with the best of them to most ethical shooting distances.

With the new Barnes 200-grain TSX load (one that they added to the line at my request) it simply turns off all of a buck’s switches.

I wouldn’t use it for years because it was just too common. Too bland. Then I corrected that mistake. It’s pleasant to shoot, very competent in killing deer and available in a wide range of rifle platforms. If you like hunting with an AR style rifle, this cartridge is the obvious choice.

I was the first person outside of Federal to see this cartridge after I picked one up off an engineer’s desk during a plant visit. The engineer turned ghostly white and said he would be fired if management knew I saw it, so I kept the secret.

They fired him a couple of weeks later for something else, so I guess his destiny was already written.

Over the years I have used the .338 Federal on a bunch of game and seen it used a bunch more by my hunting companions. I shot one of my best black bears with it, as well as a lot of deer and hogs. The last thing I shot was an axis deer. I can’t recall anything that was not a one shot kill. It works for deer as well as bears, moose, elk, hogs and just about anything else you might hunt in America.

As a huge fan of the .358 Winchester it pains me to say this, but… the .338 Federal might well be the best short action deer cartridge on the market.

This cartridge was actually created for elk hunting, but it has proven to be an outstanding whitetail hunting cartridge. It shoots very flat and hits very hard. It might be a bit of overkill in the thick woods of Maine, or maybe not; dead is dead. But in more open areas where a longer shot is common, this is an outstanding cartridge.

Hornady’s Superformance load with a 139-grain bullet exits the rifle at 3,240 fps. With a 200 yard zero it is only five and a half inches low at 300 yards. That’s about as flat as it gets with whitetail cartridges. There was a period of time when I hunted deer exclusively with this cartridge and was never disappointed.

The 6.5 Creedmoor: An Ultra-Accurate Deer Killer

The one deer cartridge that’s missing from this otherwise excellent list is the most celebrated—and reviled—round of the moment: the 6.5 Creedmoor.

I was an early adopter of the 6.5 Creed. Back in 2007, when it was introduced, I knew I would like it. I always had a soft spot for oddball cartridges that punch outside their weight class and the 6.5 Creedmoor fit the bill.

What I couldn’t have predicted back then is that it would go on to conquer the shooting world and become the best-selling cartridge of our generation.

The biggest obstacle the Creedmoor faced in order to succeed was its bullet diameter. Even though bullets measuring 6.5mm (.264 inch) have a storied history on the battlefield, in competition and on big game, that metric never caught the fancy of American shooters, despite the presence of fine cartridges like the 6.5×55 Swede, .264 Win. Mag., and—of more recent vintage—the .260 Rem.

So what made the 6.5 Creedmoor different? Two things. First, it was designed from the ground up for superb accuracy. It was a collaborative effort between Dave Emary, then the chief ballistician at Hornady, and Dennis DeMille, one of the best High Power Rifle shooters in history. After DeMille drafted a list of what he wanted in his ideal long-range round, Emary set to work and thus the 6.5 Creedmoor was born.

The round soon started winning competitions in a variety of long-range disciplines. And that match-winning accuracy carried over into the hunting rifles that were chambered in it, too. Shooters realized it was damn near impossible to make a 6.5 Creedmoor that couldn’t shoot a flea off a dog’s tail at 100 yards.

What really secured the 6.5 Creedmoor’s success, however, was how it performed on game. One of the reasons that the 6.5 Swede and the 6.5×54mm Mannlicher–Schönauer are such revered rounds in Europe is that the bullets they fire—heavy-for-caliber projectiles with high sectional densities—do a great job at taking down game, even when shot at modest velocities. A high sectional density translates to deep penetration, and the 140-grain-class bullets that the 6.5 Creed shoots are in keeping with this tradition.

Like other great cartridges that have caught on with American hunters—the .30/06, .270 Win., .308 Win., 7mm Rem. Mag.—the success of the 6.5 Creedmoor is now assured. And given its outstanding balance of accuracy, shootability and terminal performance, I suspect it will remain at the top of this august list for many years come.