The Quality Deer Management Association National Convention (QDMA) is in full swing in Athens GA and hogs and coyotes are... 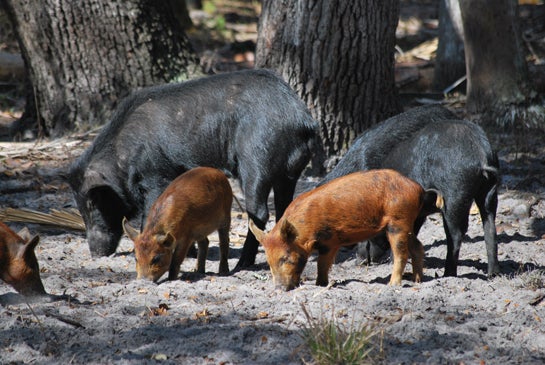 The Quality Deer Management Association National Convention (QDMA) is in full swing in Athens GA and hogs and coyotes are getting plenty of attention. Hunter/landowners from across whitetail country are reporting devastating deer predation from coyotes and extensive habitat destruction from hogs.

Coyotes are hitting the southeastern U.S. particularly hard. Reports of fawn predation are rampant with many landowners reporting rapidly declining deer densities. University of Georgia professor, Dr. Karl Miller believes coyotes to be a real threat to whitetail populations in certain areas. Trapping, thought by many to be a viable solution, may not be. Miller and his graduate students have done extensive work with coyotes and have concluded that it is difficult if not impossible to trap out a coyote population. At best, you can reduce populations temporarily.

“One thing for sure” says Miller, “You need to be constantly monitoring your fawn recruitment. We can no longer be shooting every doe we see. With coyotes taking more than their share of fawns, populations can drop in a hurry”.

“They tear up everything we plant,” reported one habitat manager from North Carolina. “They’re wrecking deer habitat faster than we can create it.” When asked for a show of hands as to whether hogs are a positive addition as a game animal, the room of 500 land owner/deer hunters unanimously voted “no.”

State wildlife agencies are aggressively trying to curtail the spread of wild hogs. Aware of the destruction they create, they are encouraging a shoot on sight policy among hunters.

“The last thing we need in our state is an out-of-control population of wild hogs tearing up farmer’s fields and destroying deer habitat” said one biologist from the North. “Amen,” groaned his buddy from South Carolina.

The membership of QDMA (www.qdma.com) meets once a year to learn more about whitetail deer and deer hunting. Sportsmen from across the country get together with deer scientist and professional deer managers to compare notes, swap stories, and learn from each other. If it weren’t for the hog and coyote epidemics, their whitetail world would be just about perfect.