Utah has had a bounty program since 2017 and has seen an uptick in mule deer. Nevada commissioners hope to do the same, despite disputes over the cause of declines 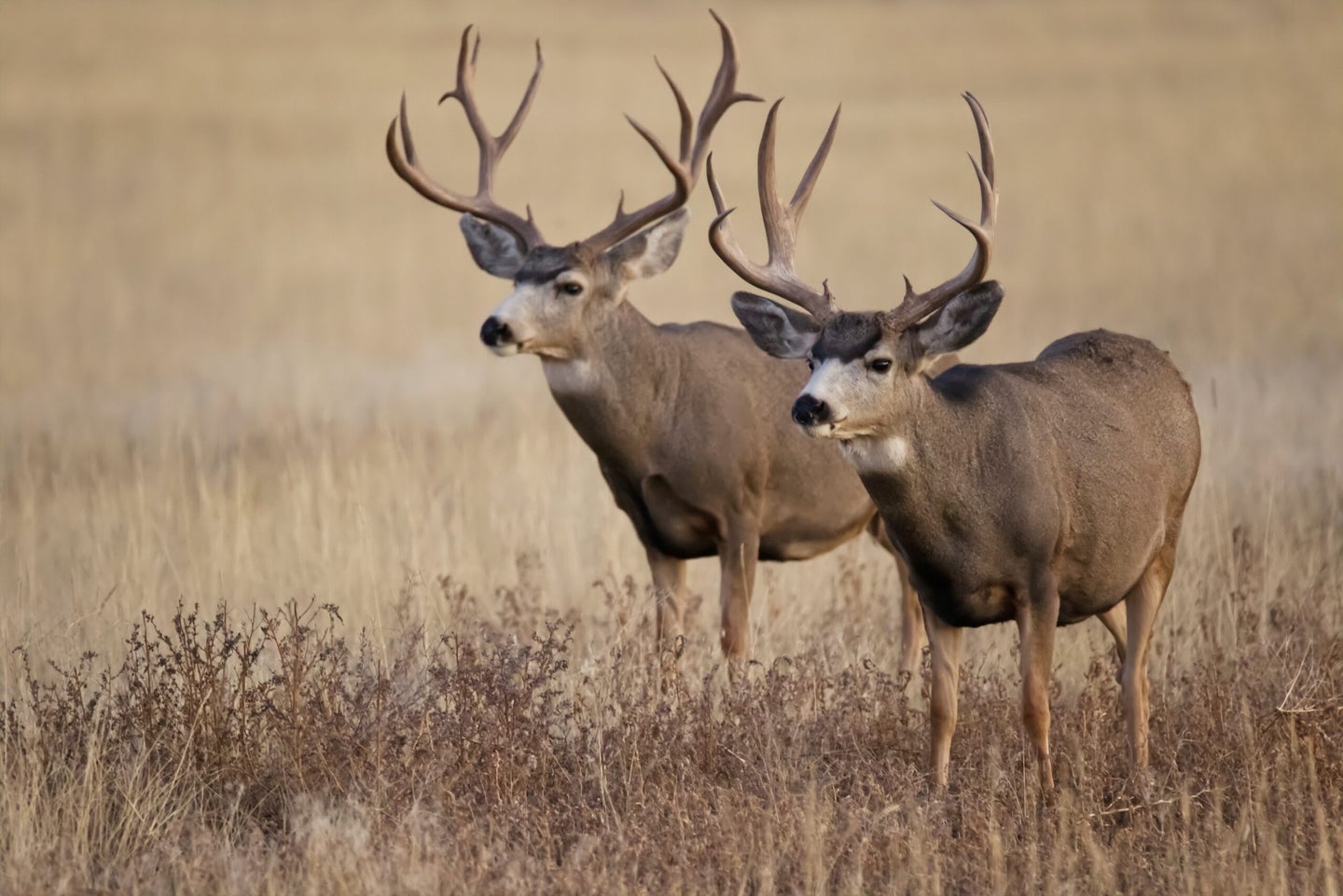 Whether or not coyote bounties will save mule deer herds is up for debate. Andrew Coop / Unsplash
SHARE

Nevada mule deer numbers have taken a sharp decline in the last 25 years. Wildlife officials are blaming predation, uncontrolled wild horse populations, and the introduction of elk as reasons behind the decrease in mule deer herds, according to a story in the Elko Daily Free Press.

There were as many as 240,000 mule deer in Nevada as of 1988, but today’s estimates put that number between 80,000 and 90,000. Elko County has been hit particularly hard hit by the decline. In the late 1980s, around 90,000 mule deer inhabited the county, but that number has since fallen to about 32,000. Now county commissioner Wilde Brough is proposing a statewide bounty program to help control the 10,000 coyotes he says roam Elko County. Utah is the only other state to offer statewide bounties on coyotes, where the Mule Deer Protection Act pays hunters $50 per coyote. Brough said Elko County’s bounty system would closely resemble Utah’s.

“I’m just trying to figure out how to get our mule deer back,” Brough told a panel of commissioners in late October 2021.

But there is already concern over coyote bounties in Nevada, a state that hasn’t yet outlawed coyote contests. The Southern Nevada Coalition for Wildlife and the Washoe and Clark County Wildlife Advisory Boards have all asked the Nevada Board of Wildlife Commissioners to reconsider the program, but officials have indicated it won’t happen, says Mike Reese, president of SVCW.

Nevada’s Department of Wildlife thinks the mule deer decline is a habitat and wild horse issue. Tom Donham, a game division supervisor for the state, wrote in an email that “the main issues in northeastern Nevada are loss of crucial winter and transition ranges from wildfire, pinyon-juniper encroachment, drought, shrub senescence, impacts from feral horses, and improper grazing.”

Brough disagrees that the habitat is at issue and plans to have a biologist from the University of Nevada-Reno take a closer look.

“We think that assessment will be pretty good,” Brough said. “We think there’s a lot of deer habitat, even in the drought.”

Controlling the wild horses is another issue, and likely to be an expensive one. Right now tax payers are funding management of the non-native species, which are legally protected, and it doesn’t seem to be working. Brough is also asking that the elk herds be moved off Spruce Mountain to open more winter range for mule deer.

“Nobody is coming up with any solutions,” Brough said. “Somehow those wild horses have just got to be controlled. I don’t know how they’re going to do it. One of the best ways I think is to get the wild horses off of the federal payroll, and make it a private deal. If people want wild horses, they need to be the ones paying for them, not the taxpayers.”

Paying for the Coyote Bounty System

In Utah, the legislature budgeted $500,000 for the state’s coyote bounty program. From 2016 to 2018 hunters did turn in an average of 10,000 coyotes per year. So, at $50 per coyote, that means the state used all the allocated funds. It’s a hefty price tag, but Brough’s argument is that Elko County should make an investment in controlling coyotes because it will result in the resurgence of mule deer populations.

If there are more mule deer, ostensibly there will be more mule deer tags, he reasons. That will bring more hunters and commerce to Elko. The University of Nevada Cooperative Extension conducted a study on this very issue. The report included the cost of the tags, plus the local expenditures of those hunters.

Based on those numbers, Brough estimates that the total economic impact for the county would surpass $41 million if mule deer populations returned to what they were in the 1980s. If they recovered to historic numbers, then the state would theoretically issue 50,000 antlered mule deer tags and 20,000 antlerless tags. The Elko Daily Free Press reported that Brough’s estimate is likely high, but even 10 percent of $47 million is $4.7 million, a significant number for a county of 52,778 residents.

Will Coyote Bounties Save Mule Deer?

It’s difficult to say if the bounty system in Utah is working. That’s because the Utah Division of Wilderness Resources, in conjunction with federal wildlife services, also removes coyotes in designated areas with helicopters. It’s funded by a $5 fee on all big-game hunting permits. Utah has also put a lot of money—tens of millions of dollars statewide, according to the DWR—in long-term habitat restoration for deer herds.

“We’re trying to remove breeding pairs prior to deer fawning in June,” said Utah DWR Game Mammals Coordinator Darren DeBloois. “Those seem to be the coyotes that have the biggest impact on fawn recruitment… I guess the overall philosophy is, a bounty to kind of keep pressure on coyotes in general, but then we like to go in and surgically remove them in areas where we have concerns based on our biologists’ experience on the ground.”

Even if causation is difficult to identify, there is a correlation between targeting coyotes and mule deer recovery in Utah: The mule deer numbers have rebounded in the state. In 2012 the state had an estimated 286,000 mule deer. By 2016, after the coyote bounty and DWR target programs were put in place, the population rose to 384,650. That number has declined slightly in the last few years, and this summer’s drought also reduced the bounty totals, putting the overall numbers around 320,000. The coyote bounty program has trailed off as well. In 2017 more than 11,000 coyotes were killed; now that number is down to 3,704.

Nevada’s Wildlife Services Are Not as Well Equipped

There is no hard data on the number of coyotes that are killed in Elko County each year. According to the Elko Daily Free Press, Brough said he has heard USDA-APHIS Wildlife Services kills about 4,000, but that number cannot be confirmed. There also used to be five Wildlife Services trappers stationed in Elko County; now there are zero. While the state tries to figure out its employment shortfalls, the mule deer continue to suffer. But there’s no real proof that a bounty system will result in an uptick in mule deer numbers and the resulting financial windfall that could come with it.

“We’re putting our heads together to figure out how to better utilize the work force based on where the livestock is,” said Mark Ono, Nevada’s director of Wildlife Services program. “Elko County is the biggest livestock producing county in the state. So, it behooves us to try to rebuild that program so that Elko County has at least two trappers…. It probably needs more, because it’s such a big county, but we’ve got to start somewhere.”