Telecheck Deer: The Way of the Future or a Missed Opportunity?

CC image from Flickr EDITOR’S NOTE: There are few things as polarizing — or as important — in whitetail management... 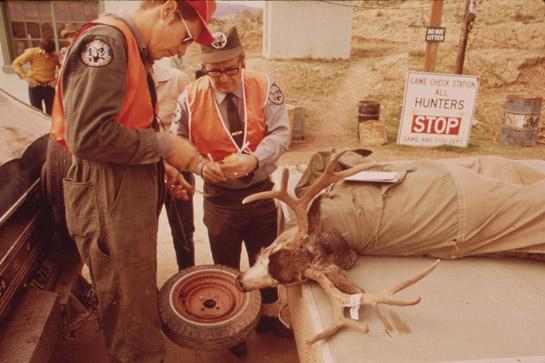 EDITOR’S NOTE: There are few things as polarizing — or as important — in whitetail management than harvest reporting. Two Outdwoor Life editors take different perspectives on the topic. Who do you agree with? Let us know in the Comments section below.

The recent news that Wisconsin officials have voted unanimously to remove in-person deer check stations by 2015 comes with a fair amount of consternation.

For me, real, live hunter check stations are equal parts sentimentality and practicality.

I know the sentimentality part of the issue doesn’t stand up, but every time we lose a place where hunters can gather, we lose a little bit of the fabric that binds us as a community of people. So many of us grew up looking in the beds of pickups and admiring bucks taken by people we didn’t know. So many of us made a trip to the weigh-in pole at a local gas station or cafe a tradition after coming in from the field on opening morning. I hate to lose that tradition.

But here’s the other thing about mandatory check stations: they collect and reveal important biological information. Dead deer–every dead deer–has a tale to tell and that’s takes on even more importance in this age of CWD, EHD, and point restrictions. Biologist-manned check stations give state DNRs a handle on its deer herd and without them that handle is in serious jeopardy.

Will we get fewer deer, and therefore less information, with a telecheck or internet-delivered check-in program? Undoubtedly yes, but it seems that states have a way to account for this “under reporting,” seemingly the current-day PC term for poaching. Agencies have a mathematical formula to account for such annoyances. It’s called the fudge factor. In New York’s voluntary system, for example, officials believe that 45% of harvested deer are reported. That is decidedly not a harvest report but rather a harvest estimate. Read: guess. As a hunter, I deserve better than a guess–and I’d be more than willing to pay more for that in license-fee increases. What I most definitely do not want is bad science. When a promising pre-season deer forecast turns into a horrible deer take and is then blamed on the weather, well, I’m just not buying it.

Word from Wisconsin is that the DNR is considering alternatives for collecting deer data as the check stations are eliminated. Such methods include instituting random in-person registration, sampling tissues from deer taken to meat processors, and requiring hunters to send in deer jaws.

Nobody wants to see change, especially if there’s no good reason for it. But when it comes to mandatory game-check stations, there are good reasons to change. For starters, these field stations are expensive, and you hardly need to be an economist to know that state game agencies are generally not rolling in dough right now. Money spent on check stations won’t be available for other critical programs, like game wardens, habitat enhancement, and recreational access.

Second, the information the stations collected was spotty, and can easily be replaced with a simple, cost-effective remote reporting system. Digital communication is what we do these days, and with some tweaks (see below), this could be a very useful and cost-effective system.

And third, don’t fool yourself. We didn’t get anywhere near full compliance with mandatory check stations. Will we get better compliance with electronic check? Probably.

Gerry is right on with his sentimentality argument. I grew up going with my dad to the MFA station in Unionville, Missouri and seeing my neighbors’ deer. But I saw only a fraction of the deer that I knew had been killed. Many landowners in my county simply hung their deer up in the shed and never reported the harvest.

What I’d like to see is a way to improve the instant check system. If states have a problem with reporting, then incentivize the system. Every 100th reporter gets a free deer tag for the following season. Every 10,000th reporter gets $1,000. I guarantee you that would improve participation.

And close the feedback loop. My problem with electronic checking is that users’ data goes into a system that doesn’t respond. I’d like to get a ping back that tells me that my buck was the 81st of the day from my county, and my 4×6 is the third biggest taken in the season so far. And after the season, have the system report the harvest, direct to my phone. We all want to feel like our participation makes a difference, and these would be easy ways to accomplish that.

Now it’s your turn. Does your state require reporting? If so, in person or electronically? Which do you prefer?