Report from the SCI Convention: A Look at Hunt Auctions (and the Controversy Behind Them)

During the Safari Club International conference last week I learned why blue-collar deer hunters should pay attention to auctions that... 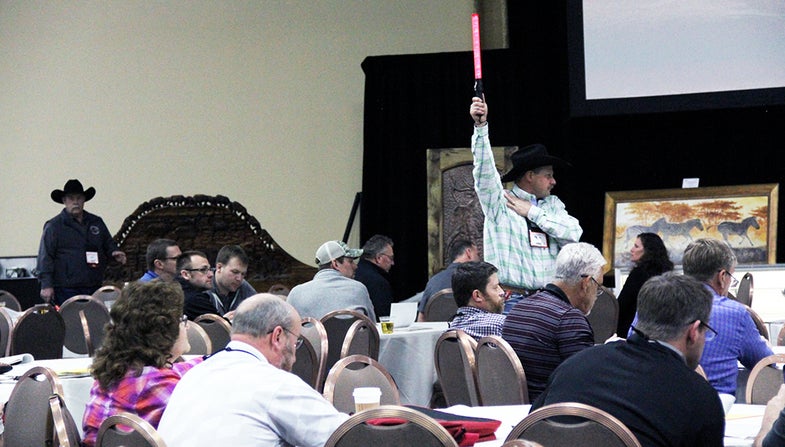 During the Safari Club International conference last week I learned why blue-collar deer hunters should pay attention to auctions that sell hunts for $10,000, $15,000, and even $20,000. So, even if you don’t plan on ever hunting Africa, bear with me…

There are 12 men with cowboy hats spread throughout the crowd holding neon red wands. On projection screens behind them flash images of deer and salmon, and above it all stands the man in charge. The auctioneer.

I’m at the 2016 Safari Club International convention and the organized chaos surrounding me is the first of several auctions that will take place here over the coming days. Through the auctions and the convention, SCI will raise about 70 percent of its yearly funding. In 2014 (the most recent year this data are available) SCI raised $14.7 million at the convention and contributed $4.97 million for pro-hunting legislative work and global conservation efforts. This type of fundraising mechanism isn’t unique just to international organizations such as the SCI though. Even the Quality Deer Management Association depends on auctioned hunts and items to help fund their work. In fact, according to the 2016 Whitetail Report, nearly a third of the revenue coming in to support the QDMA’s work is from donations and fundraising such as this. Unfortunately, this popular conservation fundraising tool might be at risk.

In 2013, mainstream media caught wind of a Dallas Safari Club auction for a black rhinoceros hunt that quickly exploded into an anti-hunting outrage that swept across the country. Negative media attention became so intense that auction organizers became concerned they wouldn’t be able to sell the hunt, which had been expected to raise between $250,000 and $1 million dollars for rhino conservation. And while the hunt did end up selling, that didn’t stop some media outlets and anti-hunting organizations from having a field day. Since that time, a number of other big-game related stories have fueled negative sentiments toward trophy hunting and related auctions.

And that takes us back to the 2016 SCI Convention, which drew the ire of anti and non-hunting media. Headlines such as “Controversial Auction to Permit Killing of 600 Wild Animals” and “Pay to Slay” are popping up online, and a small group of protesters stood in front of the Mandalay Bay resort last week decrying the event.

While this kind of attention is obviously not what the SCI or any other conservation organization wants, the more concerning issue might be the implications of this growing movement on the future of conservation related auctions. Will future buyers steer clear of high-profile big-game hunt auction items? Will mounting media pressure force conservation organizations to change what types of hunts they can offer? Will issues such as new airline bans on shipment of wildlife trophies reduce demand for these types of trips? If any of these issues comes to a head, it could be disastrous for the organizations that depend on these auctions for funding. More importantly, it could be disastrous for the wildlife that benefit from auction dollars.

For the time being though, it seems it will be business as usual.

“We are not going to let a couple hundred or thousand people influence our efforts to provide a service to our members and to fund conservation and wildlife across the United States and the globe,” says Chip Burkhalter, the SCI Director of Government Affairs. Chip went on to explain that he believes much of the controversy around events such as these stems from a mischaracterization of hunting auctions and big game hunting in general, much of which has been propagated by anti-hunting organizations.

“We’re cognizant of the fact that these groups can wield influence,” explained Burkhalter. “But as long as we continue to educate others and we hunters across the country rally together, I’m confident we can in fact thwart these people out there. But we need to come together as a community.”