Safari Club International: First For Who?

“Not my area of expertise … I always thought of it as an advocate group for exotic game hunters… My... 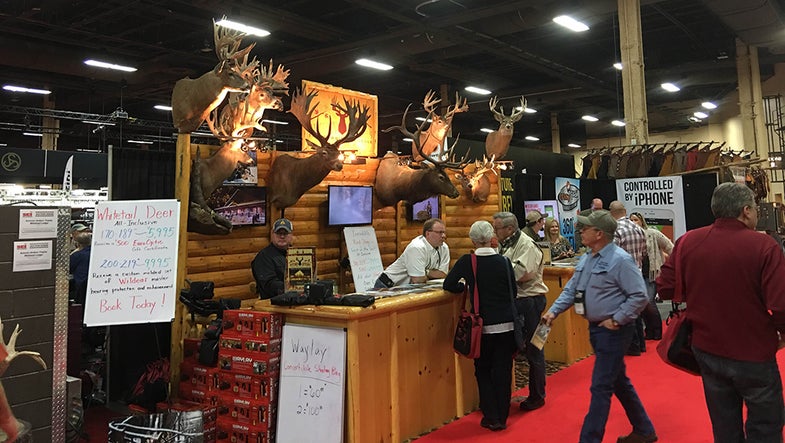 “Not my area of expertise … I always thought of it as an advocate group for exotic game hunters… My perception is that they help guys set up expensive, guided hunts … I think they cater to wealthy.”

These are the responses I got when I asked my deer hunting buddies what they knew about Safari Club International. I’m guessing you might have had similar assumptions, I certainly did. But the SCI lately has been making an effort to say no, that’s not all they’re about. In fact the SCI’s current tagline is “First for Hunters” and it’s been billed by some as an NRA equivalent for hunter’s rights. So does the SCI actually live up to its slogan? Is it first for hunters and not just a small privileged group of them? That’s what I was trying to figure out last week at the 2016 SCI convention.

Upon first walking out on the cavernous show floor at the SCI’s “Ultimate Hunter’s Market”, it became easy to see where some of these common perceptions come from. Row upon row of guide services or hunting lodge booths stretch as far as the eye can see, with the majority seeming to be for hunts in exotic locations like Africa, Argentina, New Zealand or some other far-flung locale. And as I strolled down the aisles, I saw high-dollar and high-fence operations commonly advertised as well. If I were to judge this book by it’s cover right out the gate, I’d say the stereotypes might be accurate. But I needed to do more digging.

“That perception certainly exists, but nothing could be further from the truth,” said SCI Director of Government Affairs Chip Burkhalter when I asked him about the above assumptions. On the contrary, he explained, less than 20 percent of SCI members travel overseas to hunt and the vast majority are “your typical everyday whitetail kind of guy.” Additionally, Burkhalter emphasized that the majority of the SCI’s advocacy work is aimed to benefit hunters of all types, across all parts of the country. For example, just over this past year the SCI’s State Affairs team worked to get approval for the Florida black bear hunt, helped to get Sunday hunting bans in part removed in Connecticut and North Carolina, and fought trophy importation bans at New York’s JFK airport. And on the federal level, significant work has been done to ensure pro-hunting legislation is passed, including recent efforts to advance the Sportsmen’s Act.

I also learned about the Safari Club International’s active conservation arm, which works through their SCI Foundation and spends approximately $1.5 million annually on conservation related programs (much of that in North America). According to Matt Eckert, Director of the SCI’s Department of Conservation, the SCI’s recent conservation projects in North America have included work related to New England moose populations and Montana elk, a reintroduction program for wood bison in Alaska and a predator-prey study in Michigan (my home state). This Michigan study in particular was of interest to me, given its focus on how increased predation and habitat changes have impacted whitetail deer populations in Michigan’s Upper Peninsula. The SCI Foundation has contributed $360,000 so far to this ongoing research effort which has resulted in updated forest management plans, efforts to secure and improve winter habitat for deer, 15 scientific publications and management recommendations that have impacted deer harvest quotes.

As the convention went on, I was increasingly impressed with the SCI’s work from an advocacy and conservation standpoint, but I still had my questions, in particular around their support of the captive deer industry, which many wildlife professionals point to as a significant threat to free-ranging wildlife and public support of fair-chase hunting. When discussing this with Burkhalter, he explained that while SCI does support high-fence hunters, they have strict criteria for what types of hunting environments are acceptable for inclusion in their record books – and he emphasized that these are not canned hunts. Matt Eckert, over on the conservation side of things, added that the SCI is active in CWD research and it’s implications on the transport of captive wildlife.

Is SCI for you? Maybe, or maybe not. But, there is a lot more to this organization than meets the eye.