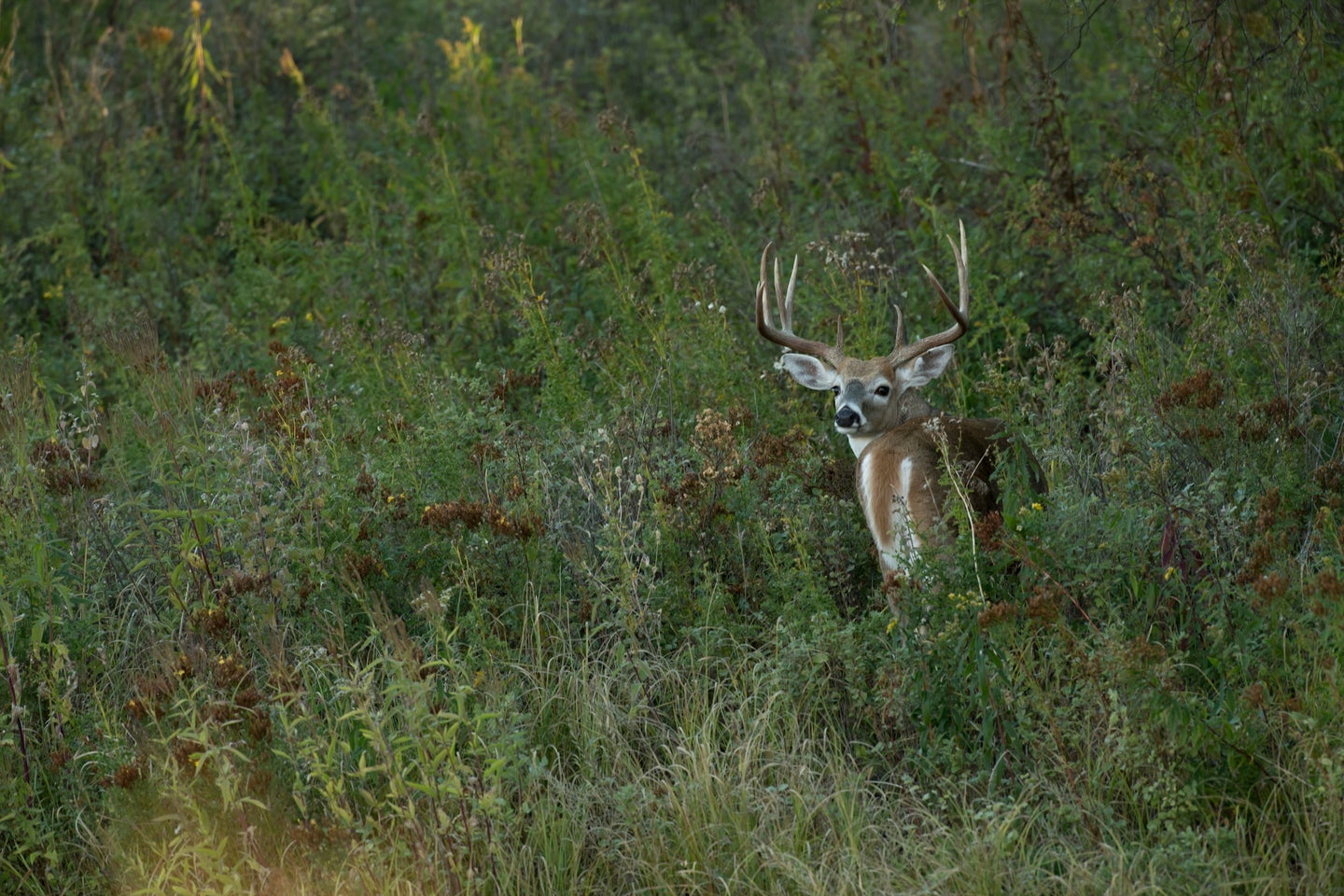 Every September, in every corner of whitetail country, it happens: While the majority of us are poring over the November calendar trying to figure out which days of the rut to hunt, word leaks out about someone who’s already put a monster buck in the books.

If you think that it is all just anecdotal hearsay, consider this: From 2003 to 2013, 19 percent of all whitetail bucks entered into the Pope and Young Club record book were taken on or before October 15. In Outdoor Life’s own Deer of the Year program, nearly a quarter of all whitetails entered were shot before October 15. Why the early-season success? The answer involves a bit of whitetail biology, combined with equal parts hardcore scouting and tactical savvy. Here’s how to do it yourself this season.

Step 1: Find Where He Eats

The beginning of hunting season has whitetails in the feeding mode of their feed-breed-feed life cycle. Here’s how it works: In late summer, whitetails chow down on the most nutritious foods they can find. According to Kip Adams, wildlife biologist and QDMA’s director of conservation, deer are genetically programmed to set up defined home ranges near highly nutritious food sources and heavy bedding cover. They move as little as possible in order to pile on the poundage in preparation for the rut—and winter—that follows.

“Whitetails are all about putting on weight in the early season,” says renowned whitetail authority Charles Alsheimer. “In fact, they’ll gain a full 20 percent of their weight from August 15 to October 15. The early-season hunt, therefore, should be all about hunting food sources. The deer feed and bed, then bed and feed until the rut ramps up and the need to breed dominates their lives. But early on, they are eminently patternable.”

At some point in late summer (usually September), soft and hard mast becomes available, resulting in a shift in feeding patterns. First are soft-mast crops like apples, pears, persimmons, and a host of sugar-rich berries. Hard-mast crops like acorns and beechnuts, which are rich in carbohydrates and fats, are next, providing the stuff that builds reserves for the rut and winter ahead.

But killing a good whitetail buck in this pre-rut period involves more than understanding simple biology. It’s also about finding a place that is likely to hide a mature animal.

Step 2: Learn What He Does

Early-season devotees know which preferred foods are available and when deer seek them out. They also know precisely how to scout food sources to locate the buck they want. However, not all of them go about their business the same way.

Kansas outfitter Larry Konrade is one of the most successful whitetail outfitters in the country. Konrade, a big-buck specialist, says his favorite season to target trophy whitetails is during his state’s September and early-October bow and muzzleloader season. Konrade’s singular focus is getting his hunters in front of trophy bucks, and he delivers the goods year after year. Most of his hunters have opportunities at 170-inch bucks inside of 100 yards. One of the biggest they’ve killed grossed 190 2/8.

“Our deer go from bedding areas to feeding locations and back again,” says Konrade. “They are very patternable. All you need to do is watch them, figure them out—and get on them.”

Private-land hunters, like Konrade, are often able to identify specific bucks to hunt by staking out planted-food sources.

“I can pretty much say that every deer we hunt has been patterned,” explains Konrade. “We use a lot of cameras and spend a lot of time in the field to find out what the big bucks are feeding on and how to hunt them. But more often than not, we’ll be watching a deer through a spotting scope from a distance of almost a mile or more. We have a lot of open country here in the Midwest, so we do a lot of spotting scope work.”

For public-land hunters, the chore is considerably more difficult. Not only is it a lot tougher to locate a specific buck to hunt on public land, but it’s also tougher to pattern him.

Michigan’s Chris Eberhart has formulated his own plan. Eberhart, who has lost count of the number of mature bucks he has killed on public land, prefers not to identify a specific buck to hunt. It can be done, but he sees it as a low-percentage game. Instead, he scrutinizes topo maps and aerial photos in search of remote pockets of habitat on public land where he knows big bucks will be—places where other hunters are unlikely to tread. If he finds a food source nearby, he knows that his chance at an early-season buck will come. Acorn-dropping white oaks, abandoned apple orchards, or even a single producing apple tree amid thick cover are his favorite stand locations.

“I really like areas that are isolated by water or swamps,” Eberhart says. “Deep gulches and super-steep slopes are also good places to hunt mature bucks. I mark areas like this the season before or in early spring.

“Scouting too close to the season is a great way to ruin the hunting,” he adds. “For public-land bucks, the need to feed is secondary to the imperative to stay alive. I scout the year or at least six months before I plan on hunting an area. All the mature bucks will be nocturnal in one to two days if they feel pressure. The way you pattern big bucks is to find an area where no one goes, and that’s where they will be. The sign will be there from the year before.”

Although he owns some land in New York State, bowhunter Jason Ashe also targets food sources on nearby public-hunting areas early in the season.

“I look for early-season food on public land just like I do on private property,” says Ashe. “The only difference is, I didn’t plant it. The state forests I hunt have been logged over the years, and these areas are covered with the berry bushes and young growth that deer love. I’ve found old farm sites with honeysuckle vines and all kinds of grown-up stuff that deer love to feed on. There are always some old apple trees around somewhere—you just have to put in the time scouting. These places are right there on the map.

“Another thing to keep in mind is that public-land deer definitely use private croplands. A deer will travel a mile or more to get to a field of beans or a patch of alfalfa. They may feed all night out in the open, but by daybreak they will be well back in the woods, where no one can reach them. Most guys hunt too close to the road. That’s why I study aerial photos to find human travel routes, then map them. This tells me where I don’t want to be. I like to set up on natural terrain funnels and crossings, and catch deer when they are coming back to their bedding sites.”

Step 3: Know When to Take Him

When the green flag comes down on opening day, there are two schools of thought on big bucks: Hunt them easy or hunt them tight and hard. The choice typically depends on the “where” of your specific hunting equation.

Savvy private-land hunters are all about keeping their targeted bucks calm and relaxed. They do not intrude, but rather nibble away at the edges of a buck’s territory in hopes of catching him with his guard down. They make their move when the time is right but avoid unnecessary pressure at all costs.

“During the early season, big bucks are still using open fields and can be easy to pattern, but that doesn’t mean they are easy to hunt,” says Bass Pro Shops’ Jerry Martin, who is a big fan of the pre-rut. “You can hunt a mature buck from the same stand for maybe one or two days, but then he’ll be onto you. You can’t be traipsing all over the woods and expect to kill him. I’m real careful to play the wind right and keep noise to a minimum–it’s critically important. Anything new or strange will alert a big buck in a hurry. Clinks and clanks are a dead giveaway. A buck that has been around for a while knows all about strange noises and smells. He may start the season relaxed, but it doesn’t take much to put him on alert.”

“We are super cautious to not pressure them,” says Konrade. “A big old buck won’t put up with it for long. We set and check cameras only when the deer are bedded.”

On my 500-acre property in Upstate New York, my son Neil (pictured above) and I also go to great lengths to avoid polluting the woods with human scent. We try to provide the deer with all the comforts of home—and surprising them in their bedrooms is not one of them. Our neighbors hunt hard and lay down plenty of tracks and scent cones that alert the nearby deer to their presence, and we try to use that to our advantage. We give the deer plenty of room and try to provide them with sanctuary areas where they can bed and feed without harassment. They pile into our safe haven as the surrounding pressure builds. We may move in on them during the rut, but we try to avoid too much pressure during the early season.

Many public-land hunters, like Jason Ashe, prefer to hit them with everything they’ve got.

“I hunt deep and I hunt tight,” says Ashe. “I can’t and don’t worry about pressuring them by hunting bedding areas—they are already buggered up. I try to catch them heading back to their bedding areas or leaving just before dark. You have to get way in early and stay late.”

Read Next: How Much More Antler Will Your Target Buck Grow Before Opening Day?

Chris Eberhart hunts aggressively as well. He wants to be set up long before shooting light and will stay as late as legal light allows to arrow a late mover.

“You have to find these areas, set up on them, and put in your time if you want to kill a mature deer on public land,” says Eberhart. “I hunt a cattail swamp on opening day. Bucks love the place. I carry in my waders and make my way onto a small, dry spot a couple of hours before daylight. It’s a great -early-morning spot to catch a buck heading back to safety in the gray light of dawn.

“I also keep a book full of remote places like this to set up in. They all have one thing in common–and that is no hunting pressure. Big bucks know these places and are using them well before the season opens. I move right in on them, give ’em my best shot, and head out to another setup.”

Whether you are on private or public land, the early season is all about how you hunt deer that are concentrating on food sources. Food can lead you to the biggest buck of your life—if you do it right.