“It’s taken me almost 40 years to catch a 25-pounder, but this is simply incredible,” says Scottish angler Shamus Jennings... 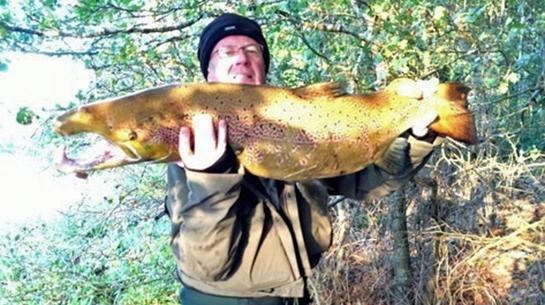 “It’s taken me almost 40 years to catch a 25-pounder, but this is simply incredible,” says Scottish angler Shamus Jennings (could a guy named Shamus be from anywhere other than Scotland?) of the monstrous fish he caught at Boleside Beat on the River Tweed in the Scottish Borders this past weekend.

Jennings’s luck began when he caught his 25 pounder on a fly rod while fishing with guide Nigel Fell. The next day he hooked into something twice as big; a 50-pound salmon that measured over four feet in length and carried a girth of 31.4 inches. Jennings told STV.TV that it took him more than 45 minutes to land the record-sized leviathan and that both he and Mr. Fell were awestruck at the size of the fish upon first sighting it.

Jennings said, “This was the first we saw of the fish and we were shocked at the size of its head.”

That shock along with the pure size and fight of the fish made landing it incredibly difficult. “It took us four attempts to get it in to the net which was pretty tough on the nerves,” Jennings explained.

Jennings and Fell released the fish unharmed after taking a few photos and measurements.

In addition to having the honor of catching the largest fly-caught fish in Scotland in 75 years, Jennings is also eligible for this year’s Savills Malloch trophy. This salmon-centric honor goes to the angler who catches and releases the biggest rod-caught salmon in a Scottish river.