Brady Ellison, the 23-year-old archer who is currently ranked first in the world, got into archery through hunting elk with... 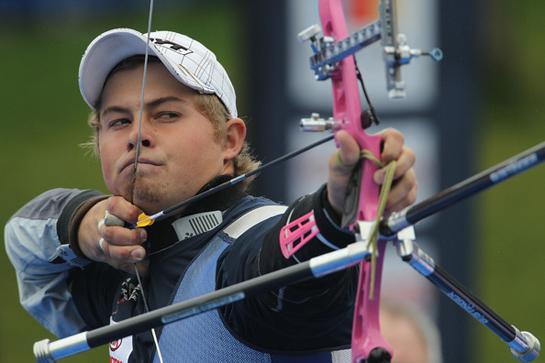 Brady Ellison, the 23-year-old archer who is currently ranked first in the world, got into archery through hunting elk with his dad in Arizona. If you’ve ever seen an Olympic-style archery match, well, it doesn’t look much like the guys zipping arrows from their compounds at your local archery range.

But according to Ellison: “Archery is archery.”

“It’s as much luck as it is skill in hitting the middle,” he told Reuters. “I’m going to come in here and see what happens. Hopefully I won’t lose in the first round but you never know.”

Incredibly, Ellison only started shooting recurves in 2005. Since then, he’s shot in the Beijing Games and won three consecutive World Cup events in 2011.

What exactly does Ellison’s sport entail? This from the World Archery Federation: “At the Olympic Games, archers shoot at targets 70 metres away. The target is 1.22 metres in diameter and marked with 10 concentric rings. Individual archers compete in head-to-head matches in single elimination after being ranked from 1 to 64 during qualifications. In each contest both archers shoot 12 arrows and only the winner moves on.”

Watch Ellison shoot on Monday, July 30. The finals for the event are on Friday, August 4.