New Mexico Poacher Busted for Having 1,600 Rainbow Trout Over the Limit

Photo courtesy of the New Mexico Department of Game and Fish. “Never in my whole career have I encountered this... 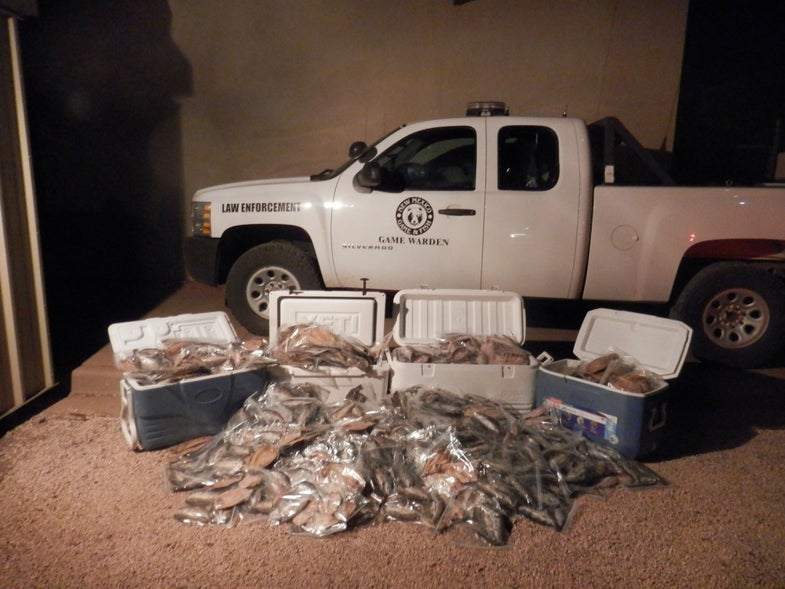 Photo courtesy of the New Mexico Department of Game and Fish.

“Never in my whole career have I encountered this before,” is how New Mexico Department of Game and Fish Conservation Officer Col. Robert Griego described the scene of a poacher with more than 1,600 rainbow trout over his limit.

Conservation officers arrested Bounchanh Bounsombath, a Clovis, N.M. resident, on May 12 after receiving an anonymous tip that he was over the legal limit. An investigation found that the 62-year-old had more than 160 times the legal limit of fish as allowed by the Land of Enchantment. Bounsombath admitted to catching all the fish at Green Acres Lake and Denis Chaves Pond in northwest Clovis.

Following his arrest, Bounsombath was booked into the Curry County Detention Center. His bond was set at $2,500. The NMDGFC will seek $8,000 in civil restitution for the state to recover the loss of the trout.

“The extreme excess of this case is aggravating. The department stocks these fish for all sportsmen and women, young and old, with the desire that everyone will have the opportunity to enjoy the fish,” Griego told Fly Fisherman.

The NMDGFC released roughly 10,000 rainbow trout into Green Acres and Denis Chaves between November 2013 and March 2014. Licensed New Mexico anglers are allowed to catch and keep up to five rainbow trout per day and may possess up to 10 rainbow trout at their residence.

Is the proposed $8,000 restitution too much, or not enough? Comment below!