Mule deer bucks are big-bodied animals that live in big country, so when it comes to selecting the best rifle... 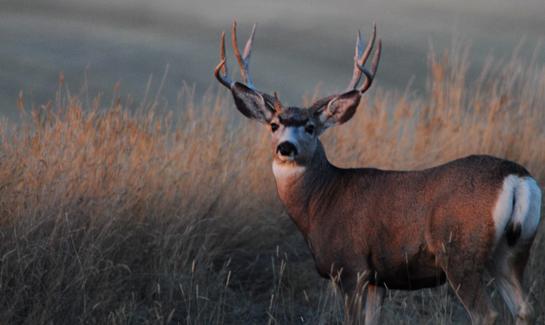 Mule deer bucks are big-bodied animals that live in big country, so when it comes to selecting the best rifle and cartridge combination, a very persuasive argument can be made for going large.

Magnum-class cartridges in .30 caliber make a lot sense for mule deer. They have the range and velocity to deliver killing hits at extended distances–this is a simple formula that I’ve used a number of times with good success.

I shot my first big mule deer with a .300 WSM at 410 yards. The wide-racked buck had been snaking through some buckbrush in the early morning light as he made his way back from a watering hole to his bedding area. I was perched on the side of a mountain watching him below me and once he moved into the clear, a single hit from the Winchester 150-grain XP3 bullet anchored him.

Is it possible to go too big? I’ve used the 7.82 Lazzeroni Warbird on mule deer, which strikes like Thor’s hammer. It launches a 150-grain bullet at 3,775 fps and at 400 yards that bullet is moving at the same speed as a .30-06 at the muzzle. But to get this of level performance you need at specialized cartridges that require specialized equipment and a more refined set of skills to use well. The Warbird and other ultra-magnums are expensive, generally require muzzle breaks and, put simply, aren’t for everybody.

While on paper they might look like the ultimate killers, a lot of hunters have a hard time shooting them consistently. The muzzle blast and recoil require practice and dedication to master. When someone heading West on their first mule deer decides to “gun up” with a magnum, that’s a big red flag.

So, I tend to draw the line at the .30-caliber magnums. The .300 WSM, .300 Win. Mag., and .300 Wby. are all more than “enough” for mule deer. Stepping up to the .338 magnums is an option and they will certainly work, but these are more gun than mule deer require, especially given the risk of deteriorating marksmanship.