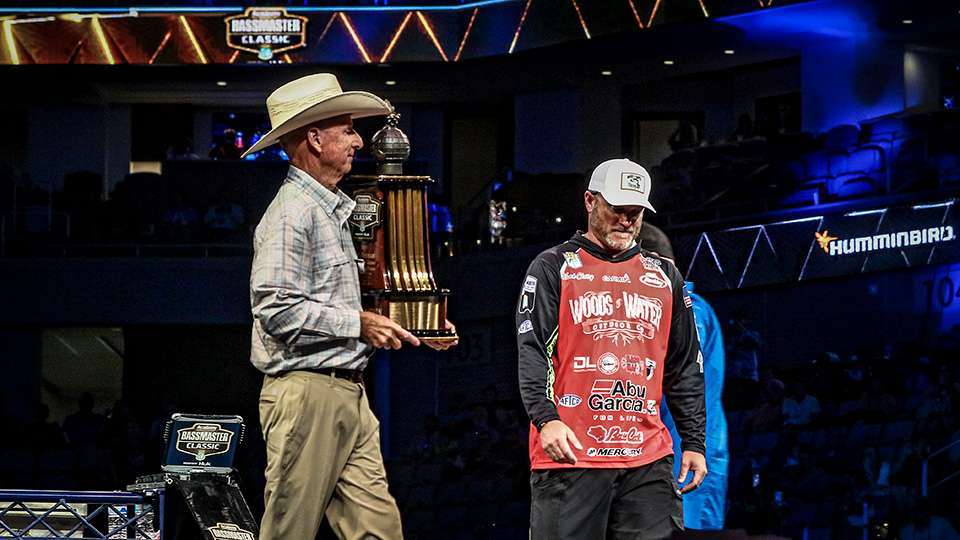 Put the world’s top bass anglers on the same lake and you throw away the textbook of bass fishing. That sums up what happened at the 2021 Academy Sports + Outdoors Bassmaster Classic presented by Huk. Initial predictions of a textbook, summertime offshore bite went away after Lake Ray Roberts rose four feet from heavy rains before the event.

The water stabilized and remained high all week. The variant was water temperature. Like the water, it shot up the mercury, beginning at around 71 degrees the week prior to the competition, and rising to 87 by Championship Sunday. The hotter it got, the slower the fishing. Fishing flooded shoreline cover became the name of the game.

Perseverance paid off. Hank Cherry became only the fourth angler to win back-to-back Classics. A familiar pattern will emerge as you view the lures of the Top 10. From bottom to top, baits for flipping and pitching were the top choices.

Patrick Walters (10th; 38 pounds, 1 ounce) found most of his success on the western shoreline of Ray Roberts. Flooded shoreline cover provided ambush points for largemouth feeding on shad.Walters never put down his flipping stick. Tied on was a bait package ideal for the conditions. Walters flipped a Zoom Z-Craw, paired with a 1/2-ounce weight and a VMC 3/0 Flipping Hook.

Brock Mosley (5th; 42 pounds) flipped bushes covered by water due to the high-water conditions. He used a Gary Yamamoto Flappin’ Hog. He rigged it on a Vector Hooks straight shank flipping hook, with a 3/4-ounce weight.

Justin Kerr (4th; 45 pounds, 2 ounces) like most of the field, found his bass lurking in the shade of flooded cover. Kerr used a bladed jig and unusual wake bait for his top finish. That choice was a custom made, hand-carved rat. Kerr also used a 1/2-ounce Z-Man Evergreen Chatterbait Jack Hammer Stealth Blade, with a Zoom Speed Craw for a trailer.

Matt Arey (2nd; 49 pounds, 1 ounce) flipped flooded brushpiles, mostly on the western shore of the lake. Arey rotated through a lineup of lures that were ideal for the heavy cover he encountered on Ray Roberts. A top choice was a prototype, soon-to-be-released, 1/2-ounce Titan Tungsten Custom Jig, featuring a 3/0 Gamakatsu Hook. He also used a Lunker Hunt Compact Frog.

Hank Cherry (1st; 50 pounds, 15 ounces) caught the bulk of his weight during the week flipping flooded bushes along the shoreline and throwing a jerkbait around riprap along the dam. A Berkley Stunna Jerkbait was a top choice. Cherry designed the bait that will be available in July. So was a 1/2-ounce Picasso Straight Shooter Jig, with a Berkley PowerBait MaxScent Chigger Craw for a trailer.