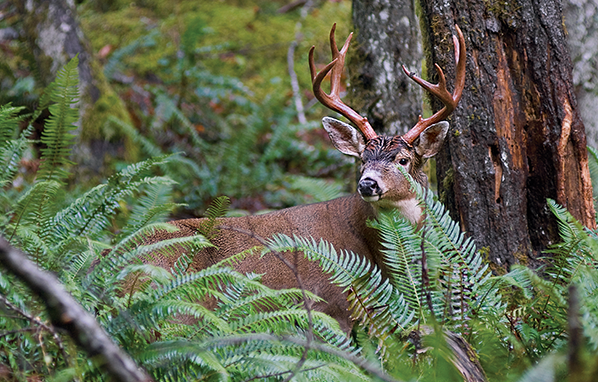 The hardest-won deer in America are the rainforest wraiths of the Pacific Northwest and California’s Central Coast. Based on the terrain they inhabit and their reclusive nature, consistently tagging a trophy Columbia blacktail requires learning the habits and habitats of these old-growth bucks.

Both my time and my water were running out. This was my last sit for the early blacktail season. Outside, the temperature registered 106 degrees; inside the ground blind, it was much hotter. Unable to stand the California heat any longer, I prepared to leave. At that moment, the movement of a velvet rack caught my eye. Soon after, the buck was in bow range, and my August blacktail tag was filled.

Having spent a lifetime pursuing deer, I consider trophy-class Columbia blacktails the toughest game animals to consistently kill in North America. That’s not because deer numbers are lacking—they aren’t. Rather, my conclusion is based on 38 years of hunting them amid some of the most varied and challenging terrain on the continent.

The few hunters who routinely tag big bucks start scouting in early July, when unpressured deer can still be seen on the edges of timber. These homebody bucks won’t roam far from where you find them now. But if you pressure them, they’ll slink into cover and you’re unlikely to ever see them again.

Blacktails inhabit much of the rugged ranges of mountains from central California north through British Columbia. Here are three states that have good populations of trophy blacktails.

California
▶ The earliest deer season out West is California’s sweltering A-Zone blacktail hunt. The bow season usually commences in mid July; the rifle season around the first weekend in August. Mendocino County is the top spot, with Clear Lake and Lake Mendocino among the prime starting points.
Blacktail units in northern California continue opening throughout August and into September.

In California’s open country, bucks are hard to approach, meaning hunters should plan to spend lots of time in a ground blind, as I did, or behind a spotting scope, locating and sizing up deer. Then be prepared to make long shots with a flat-shooting rifle.

Oregon
▶ Shots can also be long in Oregon’s general rifle season, which typically kicks off the first weekend in October. Desert Coues deer hunters don’t have anything on the cross-canyon distances central Oregon blacktail shooters often encounter. But elsewhere in Oregon—especially the fern-choked habitat west of the Cascade Crest—deer hunters carry open-sighted lever guns and measure their shots in feet, not yards.

In the state’s core blacktail range—the western foothills of the Cascades and the southern and central Coast Range—hunting the edges of logged forest units is productive. But when big bucks sense pressure, they dive into thick cover and go nocturnal. If you want a magnum brush-country blacktail, you have to root him out. Concentrate on the bottoms of brushy draws, thick fern patches, vine maple thickets, and blocks of 12- to 15-year-old regrowth timber.
Oregon’s top two units are routinely the hard-to-draw Santiam and McKenzie zones. Regionally speaking, southwest Oregon is home to the best trophy blacktail hunting on the planet. Late-season archery, muzzleloader, and special-draw youth tags generally are easy to draw, and calling and rattling can be productive during the late-fall time frame.

Hunt the Habitat
Adjust your hunting style to the terrain.

Apline Bowls
Early in the season, mountain bucks seek relief from the heat by moving to the high country. The open terrain and fitful winds make stalking difficult, so use good optics to find bucks. And use features like ridgelines and boulder fields to hide your approach.

Mature Forest
In heavy timber, cover prime ground very slowly. Once you know a buck’s core area, moving only 200 yards in a morning can be more productive than tromping heedlessly through large tracts of forest. Dissect bedding areas in fern patches, salal, and vine maple thickets, and be ready for a close encounter.

Regrowth Timber
Patches of young timber surrounded by logged units can be buck hotspots, but hunt from cover. Put the wind in your face and move slowly through the timber at sunrise to intercept deer moving to bedding areas.