Louisiana Crossbow Hunter Couldn’t Afford a Deer Lease. Instead, He Tagged a Giant Buck From His Backyard Porch

With less than an acre to hunt, Ross Wigginton tagged the backyard buck of a lifetime 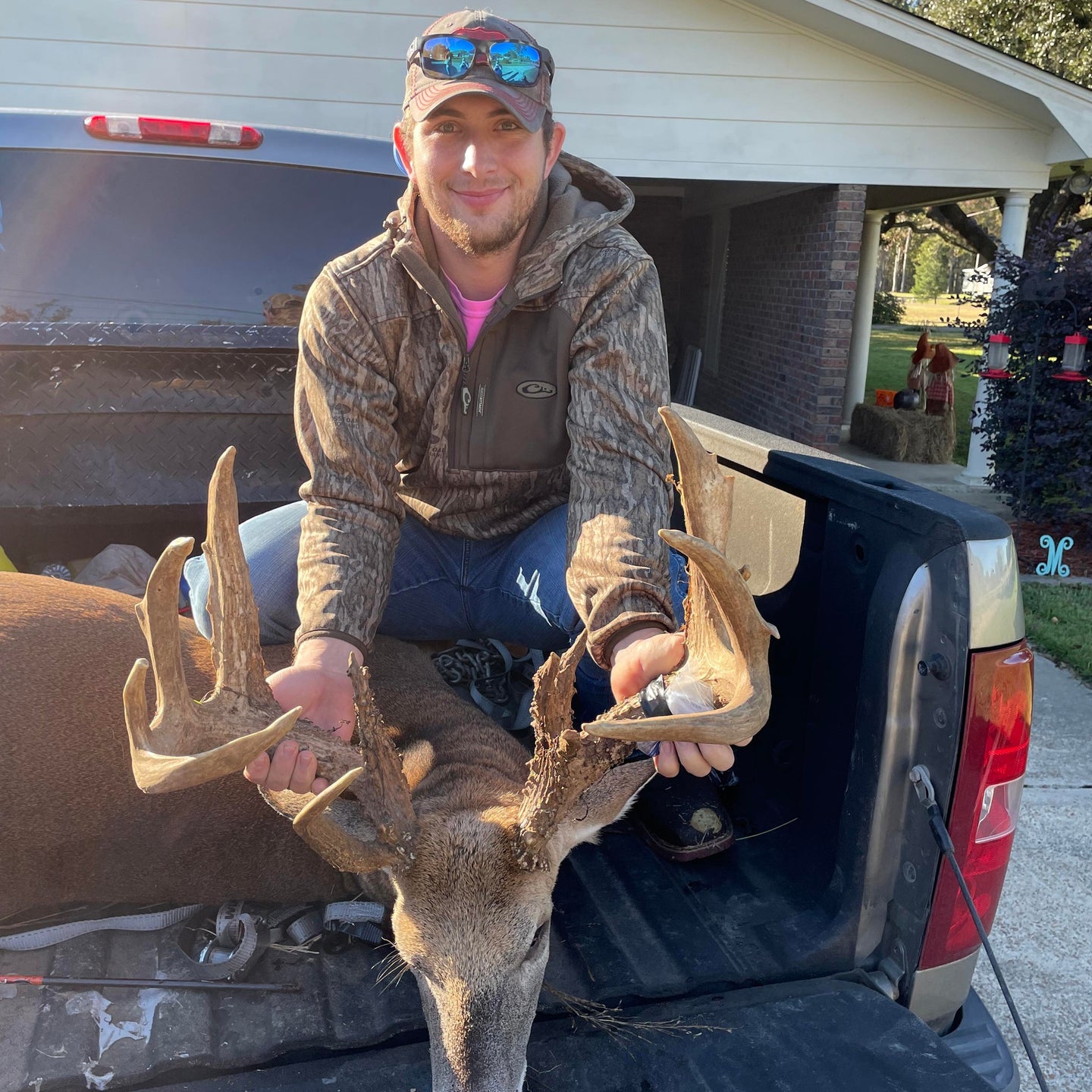 Mississippi River bottomland is fertile and well-known for growing whopper whitetails. But hunting leases along the famed Delta region of Louisiana were just too expensive for 25-year-old Ross Wigginton. So instead, Wigginton hunted his own backyard property in Concordia Parish, according to Louisiana Sportsman.

Wigginton’s home has a tract of woods near the river, with a levee between his property and the water. He’d set out trail cameras and deer corn to see what would show, and soon he had photos of a giant buck and some does roaming the area at night.

Before daylight on Nov. 14 Wigginton rose and put a chair on his backyard porch to watch for whitetails. He never thought the buck would show in the day, but a doe for his freezer would be great.

“At first, a doe stepped out and I could make her out even though it wasn’t daylight yet,” he told Louisiana Sportsman. “I watched her eat and then she walked off. I didn’t shoot because it was not legal shooting time yet.”

Soon he heard more deer walking in his backyard woods and spotted a bigger buck with a pair of smaller bucks leap the levee and walk to feed on corn just 20 yards away. As legal shooting light spread through the backyard, the deer started walking back to the levee. But at 40 yards, the bigger buck turned perfectly broadside. Wigginton took the shot.

“When I shot, he kicked up real good so I knew I had made a good shot,” Wigginton told Lousiana Sportsman. “I gave him a few minutes before walking over to where he was standing when I shot and could only find a couple of pin-sized drops of blood. I was starting to worry that I had made a bad shot and would never see the buck again.”

He walked farther toward the levee and at 70 yards spotted the dead deer.

“The first thing I did was go wake up my wife, told her what I had done and we celebrated a bit,” he said. “I dragged the buck to the levee and backed my truck up so I could slide him in.”

The buck weighed 270 pounds and has 17 points with an 11-inch kicker tine off the rack base.

Simmons Sporting Goods in Bastrop measured Wigginton’s buck for a store contest, with the deer tallying 189 7/8 inches as a non-typical. The buck has heavy mass with 24-inch main beams, over 5-inch bases, and a 19 3/8-inch spread.

“While I was sitting on the porch watching the buck and waiting for daylight, I’m just glad my wife didn’t come to the door and tell me coffee was ready,” Wigginton said.