The Opinion Pieces You Loved (and Hated) From 2021

We rounded up our most talked-about columns on hunting, fishing, shooting, and more 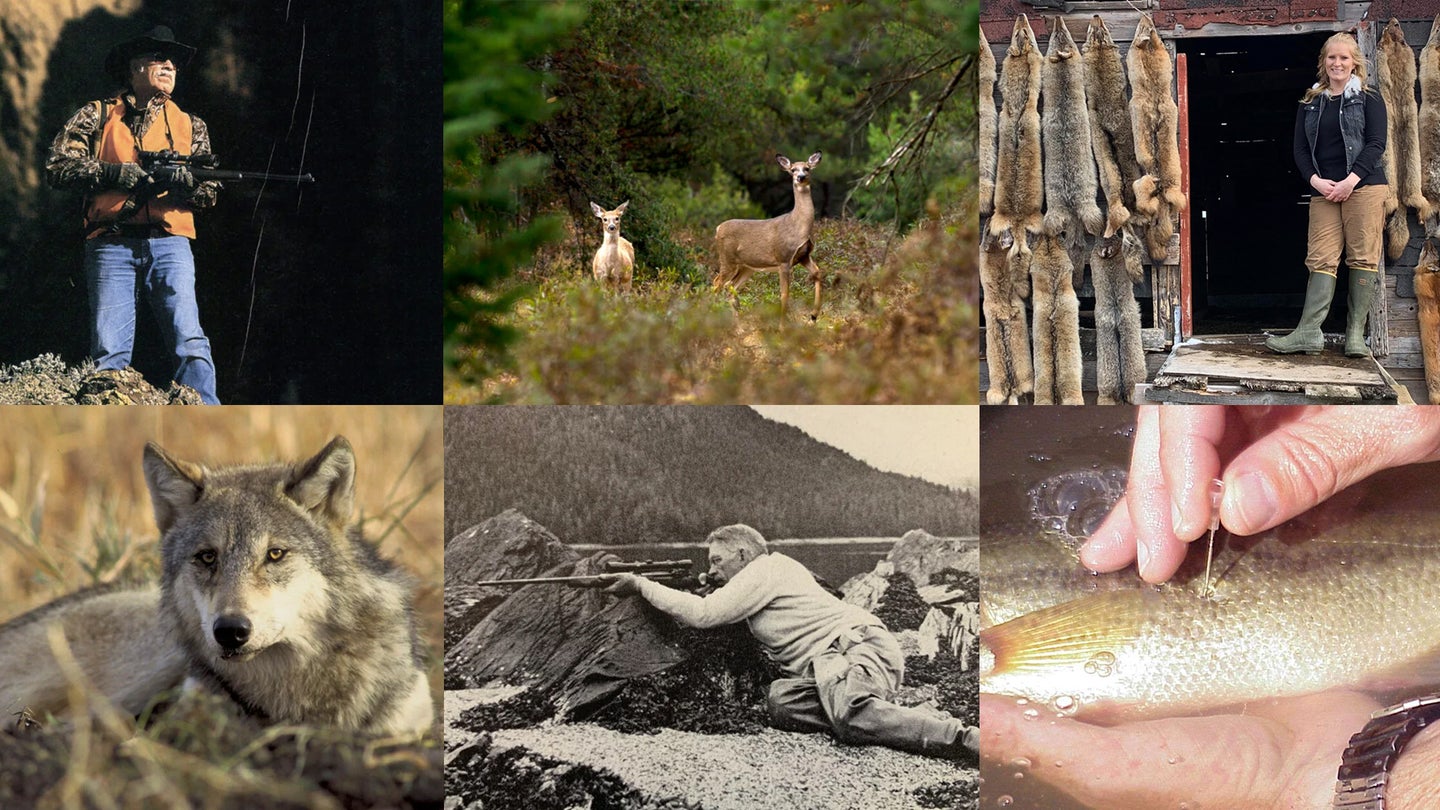 We had a lot to say this year—and so did our readers. Outdoor Life
SHARE

Our readers have always loved a good debate as much as (if not more than) the next guy. Even so, 2021 was a standout year for strong opinions and social media fistfights on everything from new calibers to hunting ethics. So we rounded up some of our most loved, and most hated, columns from this year to remind you what topics we tackled in 2021. They are listed below, in no particular order. The good news? There are still some things we can all agree on—like the fact that squirrel hunting is woefully underrated.

Should Hunters Give Up on Social Media?

There are plenty of gripes to make when it comes to the negative impacts of hunting content on social media, says staff writer Tyler Freel, who’s had his share of bones to pick over the years. Whether it’s egomania, over-sexualization, or shameless sponsor-chasing and attention-seeking behavior, it doesn’t take much searching to find content that he’s ashamed to see put out there as a hunter and social media user himself. When hunting becomes a person’s means-to-an-end on social media, it can easily become a slippery slope to a sewage lagoon at the bottom. So yes, there are certain pitfalls hunters must navigate on social media. But social media isn’t going away any time soon. Instead, hunters can leverage it to keep our hunting heritage alive and well long after the latest Instagram trend has come and gone. Read Freel’s full story here.

With so many new anglers coming into the fold during the pandemic, writes tournament angler Kristine Fischer, it’s paramount that we’re teaching safe, ethical practices for handling fish. For Fischer, that includes fizzing fish. Fizzing involves venting the excess gas from the swim bladder of a fish after it has been reeled in from deep water, usually from a depth of 20 feet or more. (This is similar to the bends, which affects scuba divers who surface too rapidly.) There are some anglers who are not in favor of this practice, Fischer acknowledges, but it’s mainly because it does take real skill to fizz a fish. But it’s not difficult once you understand how to do it. Read her full case for properly fizzing fish here.

MeatEater Misses the Point in Its “Case Against Hunter Recruitment” Story

In March, MeatEater.com—a site that covers hunting, fishing, and wild game cooking—published a story that criticizes efforts to recruit, retain, and reactivate hunters. Those initiatives commonly referred to as “R3” are really about adding to our ranks of hunters. The MeatEater op-ed, written by Matt Rinella, can be summed up in these two lines: “I’m an outdoorsman who craves solitude, yet my hunting spots get more crowded every year. That, in a nutshell, is why I’m leery of R3.”

For decades, Outdoor Life has supported the effort to mentor new hunters and retain the ones we have. During that time we’ve seen similar sentiment similar to Rinella’s used for opposing youth hunts and even for blocking hunting access in general: “I enjoy solitude while hiking and birdwatching, we can’t have hunters shooting guns in my spots.”

The four authors of the following response all grew up hunting and fishing. We have a combined 140 years of hunting experience between us. We live in the West, Midwest, and Northeast. Every year we hunt private land, public wilderness, busy wildlife management areas, and everything in between. We could be considered the old guard (we know that much of our readership is old guard, too). And we all felt compelled to offer a response to Rinella’s post. Hunters are ruining hunting? Give us a damn break. Read our rebuttal to MeatEater’s column here.

This isn’t strictly speaking an opinion piece, but this retrospective does hinge on the past and present opinions of our former Hunting Editor, Jim Zumbo. Back in the cable-TV era, you couldn’t call yourself an outdoorsman and not know who Jim Zumbo was. He took readers and viewers along on elk, bear, and turkey hunts, and endeared himself to his sizable audience with his accessible personality and easy smile under his trademark black cowboy hat.

But Zumbo’s world imploded in February 2007. He posted a blog on this very site (this was in the early days of self-published blogging) that questioned the utility, legality, and public image of ARs in hunting situations. The backlash was comparable to today’s cancel culture on steroids, and a day after he posted the blog, Outdoor Life severed all ties with Zumbo. This fall, our current hunting editor Andrew McKean spoke with Zumbo to set the record straight on the end—and the revival of—his career in outdoor media. Read about the evolution of Zumbo’s opinions here.

Spoiler alert: Studies show that the “fawn” will be fine even if you do decide to hang your tag on the doe accompanying it. As Lindsay Thomas of the National Deer Association explains in this column, antlerless seasons are set with this exact scenario in mind. But deer hunting is a sport filled with plenty of personal preferences. So it’s not surprising that some readers say they always pass on does that are accompanied by mature fawns—and they can’t believe other hunters wouldn’t do the same. Read the full take on doe management here.

What Would Jack O’Connor Say About Long-Range Hunting and the 6.5 Creedmoor?

Sure, there are plenty of hot takes on taking game at longer ranges and trendy new cartridges that everyone loves to hate. But those debates are nothing new, as Tyler Freel explains while revisiting some of former Shooting Editor Jack O’Connor’s columns on those topics. While some readers read the piece and thoughtfully considered what O’Connor might have to say if he were wrangling keyboard cowboys in our modern era, others…did not. This story also struck a chord with many of the same readers who say gun writers have abandoned their favorite cartridges. Read about JOC’s likely take on the latest trends here.

Roosting Turkeys Is a Total Waste of Time

We know, we know—them’s fightin’ words. But Deputy Editor Gerry Bethge’s first turkey season in 1984 was also the last time that he roosted a gobbler the evening prior to a hunt and successfully called that bird to the gun. Roosting gobblers with the intent of shooting them shortly after they fly down just doesn’t seem to be the tried-and-true hunting tactic that it once was, explains Bethge. The “why” of that equation is anyone’s guess, but here’s why he’s basically done roosting turkeys—and why he’s not sorry about it in the least. Read his anti-roosting manifesto here.

Hunting for Meat Is Widely Accepted. Wearing Fur from the Predators You Hunt and Trap Should Be, Too

Trapping and predator hunting get a bad rap, but that bias is frequently arbitrary among folks who have no problem eating meat. (Yes, that even includes some hunters.) Wisconsin trapper and hunter Skye Goode explains how the public’s opinions of trapping got skewed in the first place (spoiler: the antis had a lot to do with it). Then she makes the case for why trapping and wearing wild fur—a sustainable, renewable resource—actually makes a whole lot of sense. Read her full case for fur here.

The Real Trouble with the Border Closure: Here’s Why It’s Not So Easy to “Roll Over” Your Outfitted Canadian Hunt

The COVID-19 border closures put a damper on a whole lot of hunts in 2020 and 2021, and while many Americans were out a trip and a good chunk of cash, Canadian outfitters were hurting just as badly, explains Jim Shockey. The legendary Canadian outfitter detailed how the grim reality of how the border closure rocked the guiding industry, and how American hunters should try to be more understanding if they couldn’t get their money back for a hunt. Read Shockey’s full take on the border closure here.

The 3 Anti-Hunting Arguments Hunters Should Actually Worry About

In the age of click-bait headlines and sound-bite statistics that feed the social-media-outrage machine, emotions and half-truths are all you need to cancel the legitimate reasoning of people, businesses, and even governments. That makes an environment ripe for exploitation by activists who don’t care for hunting and trapping. There are plenty of illogical ideas coming from anti-hunting organizations today, but these three pose a real threat to hunters everywhere. Read about the three threats here.

In a survey last spring, the majority of Wisconsin residents opposed making changes to major hunting regulations, like expanding the 9-day gun season to increase hunter participation. A majority also opposed enacting a state-wide ban on baiting to help prevent the spread of chronic wasting disease. “Wisconsin’s sporting community are traditionalists,” the chair of the Wisconsin Conservation Congress said at the time. “They want that traditional nine-day Thanksgiving deer season, and they’re not going to let go.”

This dedication to tradition would be fine, if deer hunting in Wisconsin was thriving, explains Editor-in-Chief and Wisconsin hunter Alex Robinson. But it’s not. Read what happens when tradition threatens hunting.

Why Do I Salvage Every Scrap from Ducks and Geese? It’s Cheaper

It’s not uncommon for hunters to preach the ethics of saving every usable piece of meat, hide, and hoof from their wild game these days. Deer tongue? Save it. Leg sinew? Save it. And while Arkansan Jonathan Wilkins admits that he does this very thing with the waterfowl he hunts, it’s for an entirely different reason.

Read Next: The Weirdest Stories of 2021

Just about everything involved in waterfowling is designed to separate your money from your bank account. It’s a gear-heavy pursuit, with equipment like boats and waders that spend a ton of time partially submerged and subject to any number of hazards. Gasoline, hotels, food, guns, shells, decoys, and licenses all conspire to make every outing cost a little more than you’d planned. That’s to say nothing of the amount of time and thought invested throughout your year—especially in punctuated burst of insanity during season. Simply put, if you’re only breasting out ducks and geese after a successful hunt, you’re letting a ton of flavor, and several phenomenal meals, fall by the wayside. Read how he turns a couple birds into many meals here.

You don’t need treestands, blinds, or other cumbersome setups to successfully still-hunt deer in the East and Midwest. That’s not new information, points out traditional bowhunter Beka Garris, but it is a good reminder. It doesn’t matter if you’re a gun hunter or a bowhunter: Ground hunting is a feasible technique for any method or season. Read her case for hunting from the ground here.