So THIS is what all the hoopla is about 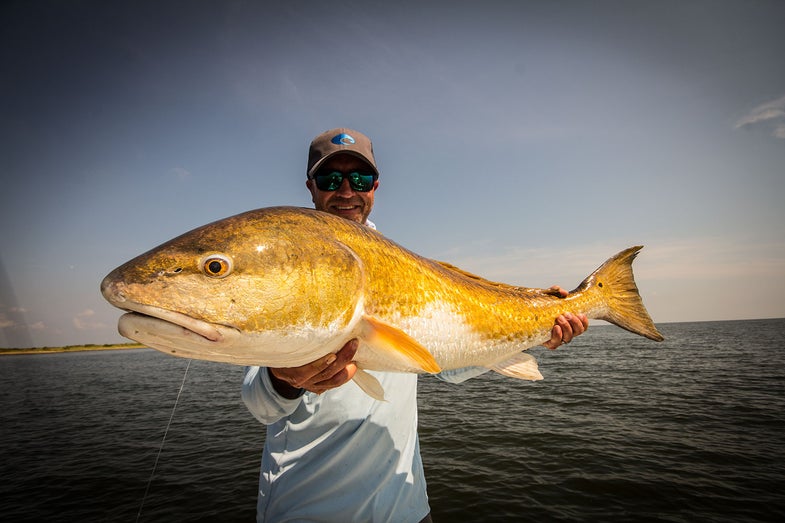 Ryan Chuckle with one of several bull redfish hooked during an outing off the coast of Louisiana. Tony Hansen
SHARE

With burning arms, I start to understand. This is why guys get all gooey over redfish. Living in southern Michigan, I’ve tangled with plenty of big smallmouth, some oversized pike, a few monster muskie. But until today I’d never laid eyes on—let alone stuck a hook into—one of the golden rockets that draw anglers to salt water and make them babble like children on Christmas morning. That changes when the popping cork disappears, the strike nearly ripping the rod from my hands as the drag screams. It happens in an instant and it takes a moment before I realize I’m tied up with my first bull red.

The intent was to target reds with fly rods, but that plan quickly dissolved after the first few casts with a popping cork produced a hookup. The popping cork is a time-tested tactic that, while often scoffed at as being too amateurish, proved to be a lot of fun.

The setup is simple indeed, comprising of a large foam cork with a length of mono line below and terminated with a basic lead jighead tipped with a soft plastic swimbait. Heave the outift out, retrieve it with sharp tugs that make the cork create a fish-attracting splash. Repeat until the bite comes.

I was invited on the outing as a warmup to the iCAST show, set to take place this week in Orlando. The purpose of the foray is to test out new clothing options from Simms, new sunglasses from Costa and to record the action on cameras from GoPro.

We were fishing just off the coast of Louisiana near New Orleans. I’d never fished the Gulf of Mexico before but had heard plenty of stories about its abundance of fish and wildlife. The stories weren’t exaggerations. We caught scores of speckled trout and dolphin sightings were common. In fact, over the course of a a 6-hour outing, we hardly went more than 10 minutes without a fish of some type being brought to the boat.

We hooked up with more than a dozen big reds throughout the day but putting them in the boat was a challenge difficult. The fish, it seemed, were focused on schools of baitfish hanging near some kind of submerged structure. As soon as a red was hooked, it would rip for that cover and our heavy monofilament would abrade and eventually break. We tried to keep any hooked red clear of the hazard but when the fish decided to run, there wasn’t much stopping them.

It’s hard to complain when you’re routinely sticking big fish, but there was definitely a bit of frustration in the boat.

After losing several fish, I was finally able to steer one away from the line-eating hazard. The golden-flanked fish tipped our handheld scale at 25 pounds and, like every other fish we caught, was returned to the water to battle another day.