After COVID-19 cancels an Alaska bear hunt, the author and his buddies make their own dream hunt 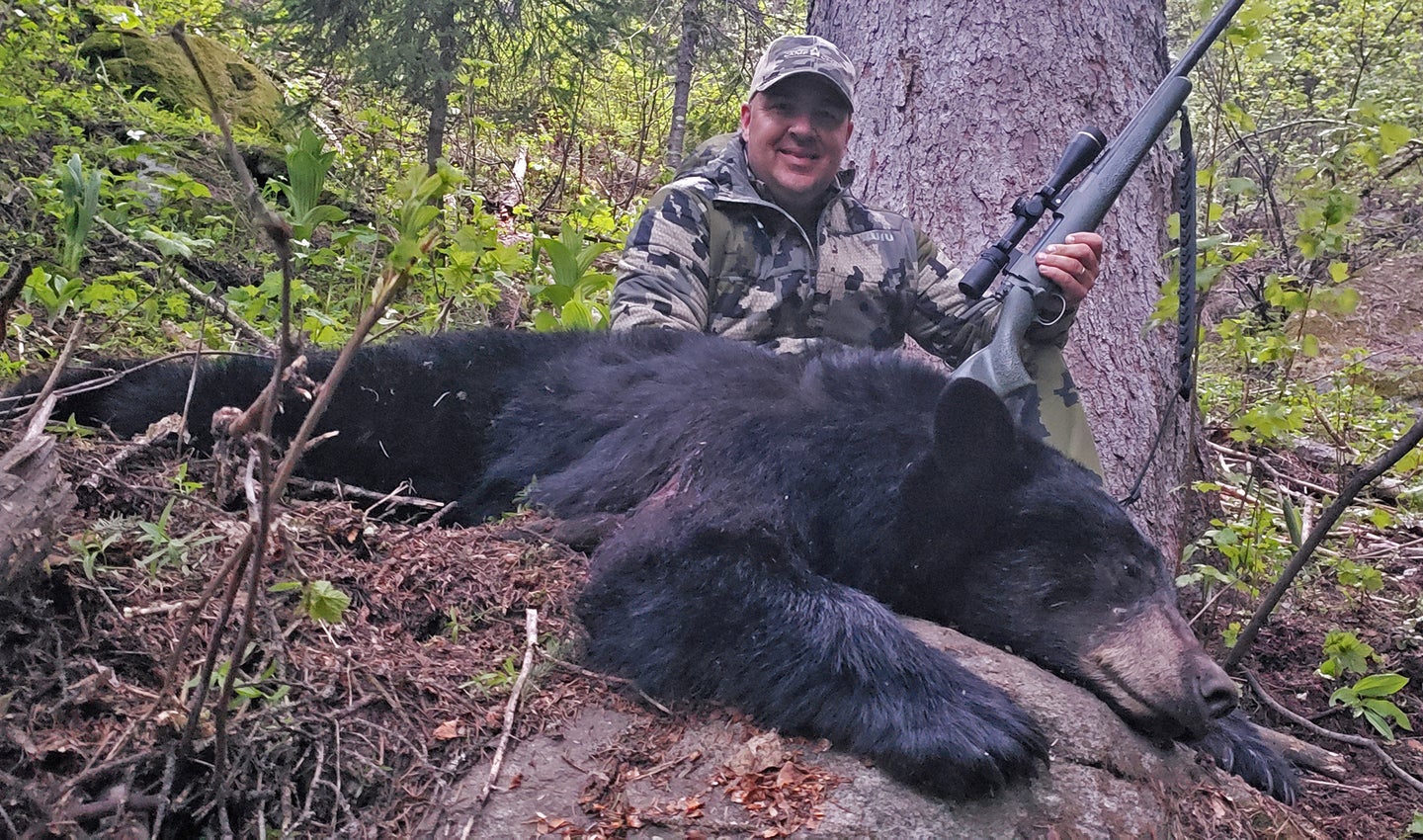 Hansen’s bear wasn’t a color-phase, but it was the largest he’s taken to date. Ben Romans
SHARE

“There’s a bear,” my friend Rocky Fennessey says to me. “I can see the tip of its nose. It’s coming down that same trail that bear took a few years ago—the one your dad shot.”

My friend Brooks Hansen sits to Rocky’s left, while I’m on his right—all three of us concealed in a makeshift blind of brush and broken tree limbs 40 yards from the bait site, and still, neither of us see what Rocky sees. But this is pretty typical. Rocky is tuned in to this region of Idaho: these ridgelines, this drainage, and the bears that live here. This is the first time Brooks and I have hunted together. He’s perched his Nosler rifle on a bipod, but even with the aid of a scope, he whispers that he can’t see the bear.

“Stay still. Don’t twitch a muscle. It’s going to come down and try to catch our scent, so just be calm. Don’t move until it’s at the barrel with its back turned to us,” Rocky says.

A moment later, a black shadow does materialize from behind a sapling. I can see a nose, then a head and ears, followed by a front shoulder. It’s squared up and looking directly at us. All three of us have been in this situation before. It’s nearly impossible to fool the nose of a bear. It knows we’re here. The question is, does it care?

As Rocky predicted, the bear isn’t scared of our presence, and after a slow saunter downhill and around the bait barrel, it settles in, with its back turned to us, to gnaw on dog food, melted marshmallows, gelatin, chocolate-covered cherries, and all manner of grease and scraps Rocky accumulated in the off season.

“Wait until its perfectly broadside,” Rocky whispers. “You don’t want to make a questionable shot and have to track it all over this mountain.”

Closing one eye, Brooks carefully aims, squeezes the trigger, and in an explosion of sound and motion, the bear darts down the mountain and out of view, leaving us to wait for that telltale sign—a low, painful echo of a bruin’s last breath.

It’s an odd moment for reflection, but the fact Brooks and I are sitting in Idaho in the first place is ironic. We’re supposed to be in Alaska. The original plan was to rendezvous in Seward, create a makeshift HQ on a 50-foot Delta boat for five days, comb the shorelines of the Last Frontier’s bays and inlets in a Zodiac, and enjoy some DIY bear-hunting action at the beginnings and ends of the days, and fish for salmon, halibut, and ling cod during our ‘down time.’ COVID-19 put an end to that.

Thanks to 2020′s pandemic and the virtual cessation of all travel, Brooks, my good friend and Camp Chef’s communications manager, and I feared we’d be stuck at home with a pair of Nosler rifles waiting for a test drive, Muck boots, and mosquito-repellant clothes, plus a backlog of sleepless nights spurred by our excitement, and high hopes of tagging a spring bear—with nowhere to go.

Down, but not out, we engaged in a last-minute flurry of phone calls, emails, and texts, and came up with a new plan. Brooks lives about four hours from my home in Boise, Idaho, and our family cabin is two hours from Boise—a stone’s throw from my good friend and bear-hunting cohort Rocky’s working bait sites, with good prospects (according to the trail camera images). So we ditched Alaska for Idaho.

Brooks left his home in Utah before sunrise, arrived in Boise before lunch, and we were heading north to McCall with more than enough time to make an evening hunt. A pit stop at a grocery store for a few supplies, a reconciliation of our clothing and gear at the cabin, last-minute phone calls to check in at home, and we were out the door to meet a man named Rocky.

I met Rocky Fennessey through craigslist. Let me explain. Years ago, while cleaning my shed, I realized several hang-on tree stands that I no longer used were hampering my organization process. So, I offered a collection up for sale for next to nothing. Rocky was the first person to respond. We talked about elk hunting, fishing, and of course, bear hunting, for almost 30 minutes.

Then he said, “Ya know, I don’t have a lot of money to buy these stands.”

But I was way off. He made me an offer I couldn’t refuse

“If you’re willing to trade the stands, I’d be happy to share my bear hunting sites with you and your dad.”

Given that his sites were no more than 10 miles away from our family cabin, I accepted on the spot, and delivered the stands the following weekend. We’ve been friends ever since, and ironically, while he, my father, and a few friends have tagged bears thanks to his efforts, I have yet to pull the trigger. Like Rocky, I simply enjoy the camaraderie and thrill of seeing someone else succeed.

Rocky is straightforward and honest. His word is his bond and he’ll give you the shirt off his back. He works hard, loves his family, doesn’t beat around the bush, and is one of the most passionate outdoorsmen I’ve ever met. In January, he’s on the horn calling me to discuss spring bear-season strategies. By mid-April, he’s the first one out of the gate setting up bait barrels and establishing his routine, which includes almost daily visits to all bait sites with fresh food.

Rocky’s baiting routine always ends with his customary “burn”—a concoction of sugary treats and liquids brought to a boil and then dripped over a site where it turns rock-candy hard as it cools. Bears in the distance smell the steaming aroma on the wind when it’s hot, and bears visiting the site carry the scent on their feet into the woods. When other bruins cross the odorous footpath, the sugar-rich, fruity fragrance becomes a breadcrumb trail that leads predators back to the same site. It’s amazing how something so simple is so incredibly effective.

When I called Rocky in early May to see if the sites were seeing any action, he was enthusiastic about the size and timing of bears visiting the sites. He was also excited that Brooks was eager to do one of two things—tag a color-phase bear, something Idaho is known for, or tag his largest bear to date—which, from my experiences with Rocky, could happen at any moment.

Brooks picked me up in Boise, and after a restroom break, we pointed his rig north toward McCall, Idaho. Years ago, when the housing economy hit rock bottom, my folks scored a sweet little cabin on three acres that was in need of some serious repair and upgrades. There’s terrific fly fishing 150 yards from the front door, amazing archery elk hunting in all four directions, the best skiing in Idaho to the north and south, a work shed with a big-game hoist and gambrel secured to the rafters, and a steam room and outdoor shower on the back porch to relax aches and pains after chores. It’s only 10 miles from our bear hunting sites, and the perfect makeshift HQ.

During final leg of our drive, my phone nearly jumped out of my back pocket, alive with a string of texts from Rocky.

“Are you guys on your way?”

“What’s taking you so long?”

“Did you see the cellular image from site #3? There’s already a shooter bear on it.”

Brooks and I dropped our luggage, swapped clothes, pit stopped at a gas station for some grub, and did our best to spin on a dime toward Rocky’s direction. When we met Rocky in his driveway, he didn’t waste time with chit chat. When it comes to bear hunting, he’s all business, and Brooks never even put the shifter in park. We were on our way.

Now, in full disclosure, I admit it—I’m a fan of cellular trail cameras, but there are times when using one feels a bit like cheating—borderline unethical. But they’re addicting, and it’s hard for me to ignore my smartphone at 2 a.m. when I hear the familiar ‘ping’ of another uploaded cam image. Depending on how you use them, I feel the whole approach is a gray area that could conflict with fair-chase principles. Brooks and Rocky agreed with this sentiment, so we decided to do the right thing and go to a site where we hope to encounter a bear we’ve photographed before, rather than the ‘sure thing’ of a bear that’s on camera and currently distracted by slop and scraps.

Parked in a Forest Service pullout, we geared up and began climbing toward the site. It’s not far away—maybe 200 yards as the crow flies—but it felt much farther given the steep grade and terrain. There’s a point about 75 yards from the bait barrel where we stopped and glassed to make sure there were no bears in the area. On a hunch that the area was clear, Rocky charged in and sets up a few chairs behind a makeshift blind.

Brooks cradled his rifle on a monopod, locked and loaded, while I crunched on chips and a leftover Subway sandwich stashed in my backpack. Both men shot me a look signaling I either need to put the food down, or hike back to the truck to finish. I opted to put the food down. Moments later, Rocky spotted movement.

Getting within 40 yards of any black bear makes the hair on my neck stand up. Seconds feel like minutes, and minutes feel like forever. By the time Brooks aligned the rifle scope on the bear’s vitals, the bear’s body language clearly signaled it knew we were there, and that we were not welcome. Rocky was worried the bear was going to bolt. But in a last-minute reversal, its stomach overruled its brain, and it decided to enjoy the smorgasbord.

A thundering shot from Brooks’ rifle created an explosion of soil and a backflipping bruin. Rocky jumped up from his chair to keep eyes on the bear’s path, but Brooks never lifted his cheek from the rifle stock as he cycled a new cartridge into the chamber. Then, the three of us sat there, almost motionless, scanning the terrain for a target.

There’s nothing to do but remain stoic until we heard it; that haunting, raw, surly sound of the bear’s death moan. Taking a bear’s life should always be a heavy moment for a bear hunter. So, when the bear’s last, beseeching breath echoed across the mountainside, we don’t talk. We paused to give thanks in silent, personal prayer, and afterwards, track, transport, and handle the animal with as much reverence as possible.

We spent the next day skinning the bear, registering it with the Idaho Fish and Game office, grilled the backstraps, and ate it for dinner with potatoes and veggies.

Brooks’ bear wasn’t a color-phase bear, but it was his largest bear to date. And he couldn’t have been happier. It was while we smoked the backstraps on the cabin’s Camp Chef grill that we both received a text from Rocky. Still jacked on adrenaline from our hunt 24 hours prior, he decided to reset the bait we just hunted, clear the trail camera SD card, and sit for a spell to see if something else might come in.

Amazingly, another bear did come in, and Rocky tagged his largest color-phase bruin ever—a gorgeous, chocolate-hued Idaho black bear—a huge feat for a man so in tune with Idaho’s predators. Two amazing hunts, in two consecutive nights, on the same site. It’s not something I thought would be possible, but in an odd, ironic, roundabout way, it happened because of COVID. Damn it.