B.J. Applegate shot a sow with a 7mm-08 centerfire in the state's inaugural black bear hunt 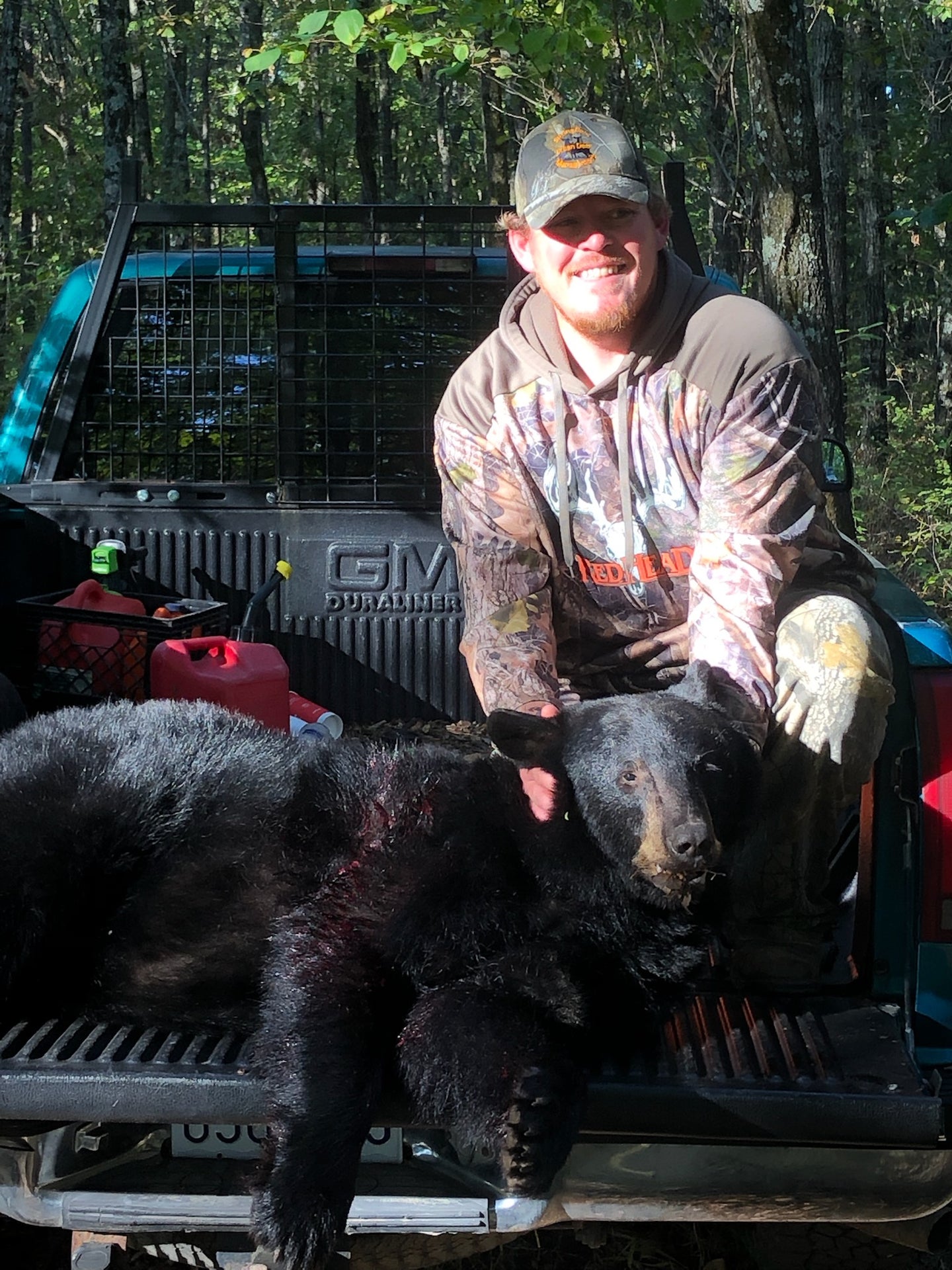 B.J. Applegate was one of the first Missouri hunters to kill a black bear during the state's inaugural hunt. B.J. Applegate
SHARE

Missouri is in the midst of its first black bear season since the species began to recover there in the 1950s. Previously, the state’s black bear population had dwindled to almost nothing due to unregulated hunting and human infringement (early settlers and urbanization). In recent years, the Missouri Department of Conservation (MDC) has conducted numerous studies of black bears, and observed a rapid growth in population, which lead to the first bear season in modern history.

The hunt is highly regulated. Only 400 tags were drawn by Missouri residents, giving them the first chance to hunt bear in their state. Although 400 total tags were issued, the hunt is being closely monitored and will close as soon as the quotas for the three hunt zones reaches 40 bears.

B.J. Applegate, a life-long resident of Missouri, was one of the first hunters to tag a bear. He couldn’t have been more excited to draw a permit and be a part of this hunt.

“It was just one of those dream hunts,” Applegate said. “I’ve been in this area my entire life and saw my first bear when I was 13 years old with my grandpa. A lot of people didn’t even think about bears being in this area. In the last seven to eight years, I’ve seen seven or eight bears.”

Applegate is a serious deer hunter, but after drawing a bear tag, he devoted a tremendous amount of time to scouting before the season.

“I hit it very hard. I was in the woods every weekend that allowed, and if I couldn’t be in the woods, my buddies were [out there],” he said.

Applegate took one of the online bear hunting information classes that MDC offered and chose to focus on the bear hunt over deer hunting this fall. He took a week off work to hunt in hopes of killing a bear. While scouting, he was able to find a ridge on public land that was loaded with acorns and bear scat.

Black bear season opened on Oct. 18. That evening, B.J. got a call from one of his deer-hunting buddies who had gone to check a trail camera on that ridgeline.

“That bear was in there eating acorns and she got aggressive with him,” Applegate said. “He said ‘she’s in there, she’s acting aggressive, I think you can get her if you go in there in the morning’ So that’s what I did.”

Applegate waited until daylight to slip into the treestand he had set in a saddle on the ridgeline. The saddle had “so many acorns you couldn’t walk without stepping on them.”

“It was one of those mornings, you just have that feeling that everything is gonna work,” Applegate said. “I knew that something was gonna happen.”

He had been in the tree for around 40 minutes. Applegate looked over his shoulder, noticing a black spot that hadn’t been there before.

“I really got to looking and could make out her hind legs,” Applegate said. “I got spun around and she took about three steps. I [brought] my rifle up and [got] on her shoulder, but I’m shaking so bad I have to put it down and tell myself to breath. She walked about another 15 yards into a wide-open spot and I shot. When I shot, she took off like a rocket. I thought there’s no way I missed her, then immediately I heard a couple of death growls.”

After calling a buddy, Applegate, who used a 7mm-08 to kill the sow, climbed down from his treestand and sat down by the base of the tree to regain his composure.

“I was pretty shaken,” he said.

Applegate went over to where the bear had been standing when he shot and quickly found blood. He knelt against a tree for several minutes looking under the underbrush and spotted more blood. When he stood up to move forward, he almost immediately saw the bear lying only 25 to 30 yards from where he shot it.

Read Next: How to Pick the Right Sidearm for Backup Bear Protection

He reported his bear to MDC almost immediately. Officials met him at his taxidermist’s shop where he skinned, dressed, and cut up the bear meat. The bear had an ear tag, and MDC was able to confirm that this sow was a 5- to 7-year-old problem bear that had been darted and tagged. It was also featured in some of the state’s bear education videos, and in the class that Applegate took in preparation for his hunt.

“You know, 15 years ago I never would have dreamed that we would have a bear season in Missouri,” Applegate said. “It happens. I get drawn. I put the hours in because it’s something I may never get to do again, and I want to be a part of it.”