From California’s wine country to Washington State’s volcanic slopes and Alaska’s rainforest, here are highlights from an overlooked deer season 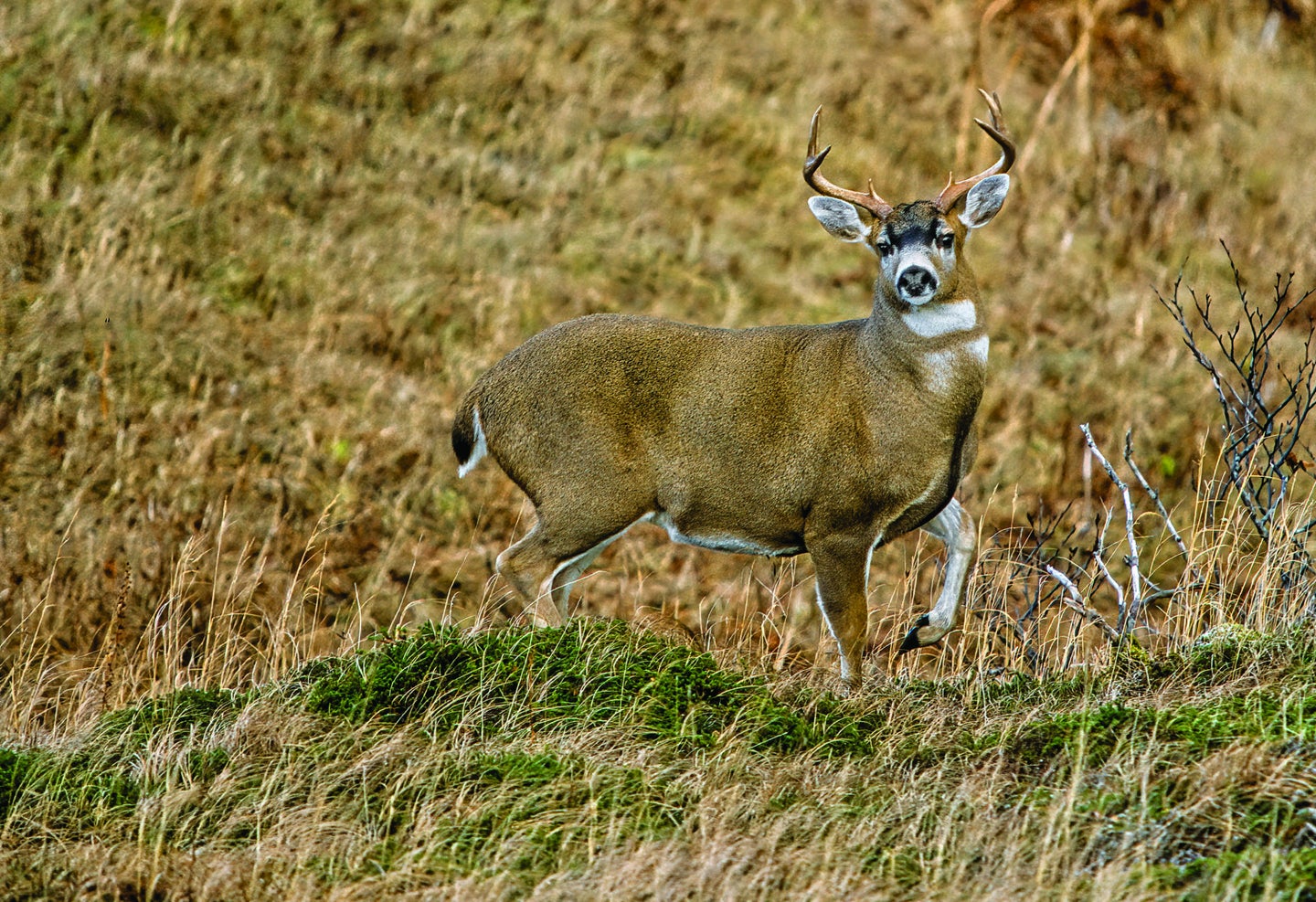 “There he is, moving through the Zinfandels. Wait. Wait. He’s heading toward the Cabernet block. We can cut him off in the old vines behind the tasting room.”

This may be the strangest hunting dialogue I’ve ever recorded. I’m in the back seat of Ryan Newkirk’s Ford F-350 pickup, which is raising a roostertail of dust as we baja around dirt roads on his family’s California vineyard to cut off blacktail deer moving through the vines. I’m a wingman on this particular hunt. My buddy Craig Boddington is in the front seat, and he’s ready to bail out the moment the pickup stops, his Mossberg Patriot sitting to his left, barrel down, bolt open on a full magazine. It might not be Alabama’s piney woods or Wyoming’s sage flats, but this is hell-yeah deer hunting, and I cannot wait to see how it plays out.

We’ve been hunting in this rolling blind for the past day—“trolling,” Newkirk calls it. We hit dust-raising speeds only in pursuit of a distant buck, or making double time to a glassing spot. Mostly, we’re idling past his family’s 4,000 rows of grapevines at about 2 miles per hour, straining our eyes to pick out the flick of an ear or the glint of an antler in a linear wilderness of grape leaves and clusters of heavy, hanging fruit, just a few weeks from harvest.

Satisfied that he’s outpaced the pair of bucks that have been jogging into the wind—not alarmed, exactly, but on edge in the long ocher light of a summertime Golden State evening—Newkirk stops his pickup at the end of a 200-yard-long trellis of vines and motions for Boddington to join him. They leave their doors open and hunch forward with the low-shouldered crouch familiar to hunters everywhere. Newkirk unfolds his shooting sticks, Boddington levels his rifle on a gap in the vines, and the sharp bark of the gun indicates that another buck is headed to the Steinbeck Vineyards skinning pole.

As a Western deer hunter, I’ve been ­curious about California’s coastal deer hunt for years. Not only is the state’s A Zone one of the earliest hunts in the country—opening the second week of August—but the deer themselves are enigmatic. Sometimes classified as coastal blacktails, sometimes as California mule deer, there seem to be dominant traits of both species in the zone, with more blacktails north of San Francisco and more mule deer south toward Paso Robles, where I was hunting. I’ve seen photos of wide-racked mule deer antlers on diminutive blacktail bodies, and I’ve seen stumpy blacktail racks on big, strapping mule deer.

The A Zone season is long and liberal, partly because the hunting is hard. The public land here is rough, dry, and relatively uninhabited by deer. In wine country—­irrigated vineyards dominate the landscape for miles in every direction—­deer are unwelcome because their taste for tender grape leaves and vinicultural tendrils costs the industry millions of dollars in damage. So most vineyards fence out deer to protect their high-­dollar crop.

Newkirk and his grandfather, Howie Steinbeck, aren’t your typical vineyard operators. They welcome deer in their 400,000 vines—they count between 80 and 110 resident blacktails, depending on how dry the surrounding country is—­accepting that some damage is the cost of growing grapes in deer country. But they recoup some of that loss by selling guided hunts, like the one I’m on. Newkirk and Steinbeck are hard-bitten deer hunters themselves, and have a barn wall bristling with the racks of bucks shot on their property.

August in California is routinely as hot as roofing tar, and on the Steinbeck Vineyards in the middle of searing days, deer bed in the shade of grape arbors. That means hunting is generally limited to the first and last hours of the day, when deer are active and therefore visible.

For parts of three days, I fail to “troll” up a buck, but on the last evening, Newkirk spots a deer as we head to a high point.”We’re not going to even slow down,” he says. “We’re going to drive right past—these deer are used to farm trucks—and then you and I are going to park on the other side of the hill and stalk in. Remember, Row 71.”

The vineyard’s rows are numbered on each end. We drive to the downwind terminus of Row 71 and head into the grapes as the sun dips below the horizon.”

Rack a round and get ready,” Newkirk hisses. I unshoulder the rifle and dial my Riton scope to its lowest power. “When it happens, it’s going to happen fast.”

We crawl over the knoll, then drop to our hands and knees to look under the ­arbor for deer legs. Nothing. When I stand, a cluster of warm red grapes swings into my face, and we continue into the wind. Minutes later, I see the buck, bedded in Row 73, just as he sees me, and I fire as he jumps. He makes it to Row 76, where I find him wrapped around the trunk of a thick vine, as gnarled and twisted as a bonsai tree.

That night, after I skin him behind the vineyard’s tasting room, Newkirk’s mother, Cindy, brings out a bottle of Steinbeck Petite Sirah and crystal glasses for the hunting party. The buck died in a block of Sirah grapes, and it’s a tradition here to raise a glass to the deer where its run of the place has ended.

I’ve toasted successful hunts with homebrew, brown liquor, and bitter ­water drawn from a local wash, but I can’t recall any libation tasting as good, or seeming as fitting in my blood-crusted hands on that hot summer evening, than that Steinbeck Vineyards red. —A.M.

The Cascade Crest in Washington State acts not only as a watershed separating the interior Columbia Basin from coastal rivers, but also as a craggy line that segregates the state’s blacktail and mule deer herds. It’s new country. Glaciers are still slowly sliding down the volcanoes that formed these mountains, the snowmelt creating lush alpine meadows, fragrant huckleberry fields, and open slopes where deer of both varieties spend their summers.

The state’s High Buck hunt opens in mid-September, and hardy hunters can find deer still inhabiting their summertime hangouts. They are often found bedded on snowfields below those receding glaciers. It’s a short season—September 15 to 25—and it’s limited to specific federally designated wilderness areas in both the Olympic and Cascade mountains. The most productive wilderness areas are along the Cascade Crest, where you’ll typically find Columbia blacktails on the wetter, more vegetated western slopes and mule deer on the drier eastern slopes. But it’s not uncommon to find both species mixed, especially in the high alpine bowls.

This may be the ultimate American public-land hunt. It takes place at treeline and above, where granite peaks rise above high mountain basins. Weather here will determine how you hunt. When the sun is shining, the bucks are lazy and feed in the open before bedding and resting. Climb to a high perch and use good optics to locate deer. Peer into the shadows of the trees to find bedded bucks ­after midday.

Shot distances will vary, but you can usually stalk closer to the animals in the lush alpine until thermals give you away. When fall storms approach from the northern Pacific Ocean, expect deer to become more active during midday, often seeking the leeward side of a slope. If fog pushes in and visibility drops, sit out the storm in your tent, but be ready when the weather breaks, as the deer will be active and out feeding when the storm passes. This is a glass-and-watch hunt. Locate a buck, then pick the route to stalk close. If you push a buck out of the basin, he is unlikely to return.

Boasting more than a half-million acres of public deer hunting, Glacier Peak Wilderness drapes over the Cascade Crest and has an inactive volcano as its centerpiece. It’s arguably the most heavily hunted High Buck area. You’ll wade glacier-silted streams and ascend steep alpine meadows full of heather, ­lupine, and Indian paintbrush. On perfect autumn days, temperatures will reach the 60s, but frequent storms will drop the temperature 30 degrees in an hour or two, turning daylight into rain and then into driving snow. Weather isn’t the only menace here. The GPW is home to the last confirmed grizzly bear sighting in Washington, so hang your food and be on the watch for alpine boars.

Mature bucks are often found in bachelor groups during this hunt, but getting to them sometimes means navigating around black bears feeding in the lush huckleberry fields. Make sure to research specific wilderness restrictions, which prohibit fires above 5,000 feet, ban campsites within 200 feet of water sources, and require hunters to sign the registry at the trailhead. But for a chance to hunt among mountain goats, pika, and spruce grouse on the glacier-fed slopes of a volcano in mid-September, this ultimate public-land destination is a unique opportunity for a deer hunter with the right gear and a sense of adventure. —J.B.

For most deer hunters, summer is a time for barbecues and planning. But for a certain breed of deer hunter, it’s hunting season. In much of coastal southern Alaska, August 1 marks the opener for Sitka blacktail deer and a national holiday for hunters who religiously pursue these tiny deer in places even goat hunters fear to tread.

In early August, the red-caped bucks that command a cultic following gorge themselves on summer feed in the high country, not unlike alpine mule deer in the Rockies. You’ll usually find them in bowls and hillsides above the rainforest, skirting patches of remnant snow from the winter that departed just a month or two before. Mature bucks visiting the timber and coastlines, where they can sometimes be found during the late-fall rut, are a rarity, so if you want to get one in August or early September, you’re probably going to have to climb. The allure of hunting these little deer in summer has more to do with the country they inhabit than their impressiveness as a trophy. However, expect to get a cross look and a sharp rebuke should you belittle anyone’s alpine buck, because those miniature velvet antlers signify a great accomplishment and effort.

Hunting Sitka blacktails on the open slopes of Southeast and Southcentral Alaska will give you an experience closer to mountain-goat hunting than any deer hunting you’ve done, and there will be times when you’ll find Alaskan bucks right alongside goats. In order to reach timberline, you’ll have to thrash through coastal rainforest, fight swaths of devil’s club, and accept living in a sopping-wet state of being. Once you’re in the alpine, you’ll pick your way up hillsides so steep and slick that they require crampons, even with no snow or ice. And even after spotting nice bucks, getting to them is sometimes impossible.

This is very much a poor man’s sheep hunt, and anyone who stumbles down the mountain loaded with one of those high-country bucks has earned the ­experience.

Hunting blacktails in the alpine is a financially attainable trip, at least by Alaska standards. There is no guide requirement for nonresidents, inexpensive transporter services abound, a hunting license and locking tag will run you $460, and the deer won’t give you a tremendous amount of meat or trophy shipping costs. For a deer hunter who wants a true, wild, mountain experience on the cheap, it won’t get much better than this. —T.F.