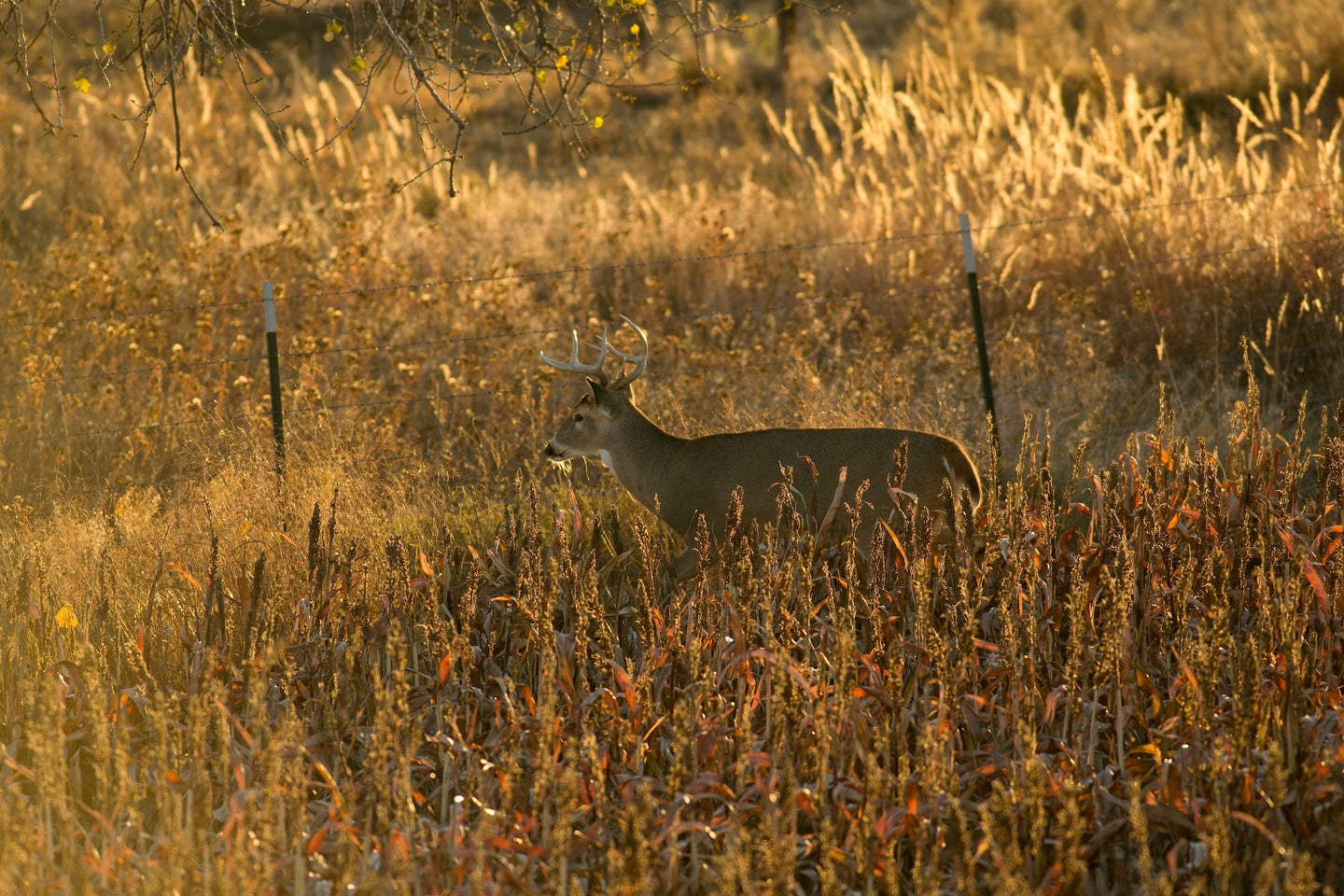 Your entrance and exit routes can determine whether a buck takes off or stays put on the property you're hunting. John Hafner
SHARE

After hunting across much of the country, one of the remarkable truths I’ve discovered is that no matter how much land a person owns or an outfitter leases, a hunter will eventually wind up sitting within eyesight of a property line. Sometimes, you’ll even wind up right next to it. Such was the case during one Pike County, Illinois, hunt where I was set up along a natural funnel between two mucky low areas behind a large pond. A fence of barbed wire ran between the pond and my stand.

As my guide dropped me off, pointing the stand out in the distance, he casually said, “Oh yeah, don’t shoot across the fence by the stand. That’s not our property.”

When I got to the stand, the fence was little more than 40 yards away. If a shooter came from that direction, he was definitely going to have to cross to my side, and cross close, for a legal shot. Somehow I sensed the inevitable.

About an hour and a half after sitting in the afternoon stand, just as deer were beginning to move, I watched as a lone orange-clad figure rolled up in the distance on a rumbling ATV. He parked and proceeded to march right into the wood lot opposite the pond. Shortly after he disappeared into the trees, I watched as four or five does bounded from the woodlot, slowing by the edge of the pond and feeding across from me. They were soon followed by a gagger 10-point, loping casually along as he looked back over his shoulder.

It was then that I noticed the wind was blowing right into the woodlot from the direction the hunter had approached. As if the noise of his nearby ATV hadn’t been enough to send an alert, the casting of his scent into the trees was confirmation of danger to every whitetail in the area. The guy clearly never even considered that and probably never even knew what he scared out of the area.

The 10-point was a clear shooter and would ultimately be the biggest buck I saw on the hunt. Did I kill him? Of course not. Despite treading at the edge of my slug gun’s range, he never crossed the fence. Instead, he lingered with the does before moving off parallel to where I sat. Even my grunts went unheralded. Such is deer hunting.

While I was bummed not to fill my tag on my trip to America’s then big-buck epicenter, seeing that hunter underscored something we’re all guilty of sometimes. Often, we spend plenty of time pondering how our hunts should play out once we’re in the stand, and not nearly enough time deciding the best way to get there. In this oblivious hunter’s case, it cost him a shot at a great buck. So don’t be that guy or gal. Instead, remember these tips when making your approach.

Show me a deer hunter who doesn’t worry about wind direction and I’ll show you a hunter who isn’t very successful. While wind can certainly carry less concern for a gun hunter than a bowhunter, it still matters. I’ve had mule deer bust from a canyon more than 150 yards away when swirling winds carried my scent and that of my guide right into the chute. And while you may have spent hundreds of dollars on the latest scent-control clothing or sprayed yourself down with enough cover-scent or scent-killing spray to mask a hog in a church, don’t believe for a second that these products will make you completely invisible. They may certainly help, but you still need to play the odds and assume that your body is always generating some scent that will waft around. Always note which way the wind is blowing and enter stands and hunt areas by walking into the wind. And remember: A lot of hunters think about where the wind will blow their scent from their stand, then proceed to walk into the stand from a direction where the wind blows their scent to nearby bedded deer. Think it through. If your access and your stand isn’t right with the wind, hunt somewhere else that day.

Running late? Don’t wreck trying to drive to your property, but don’t blindly go rushing into your stand, either. This is a particular concern when hunting evening stands. Most hunters are guilty of arriving to a spot after the deer have already begun to move, only to blow deer out of a field they plan to hunt. This can kill the hunt for the evening. Even if the bruiser you hoped to catch before dark won’t be there for another hour, he will often notice the deer that are usually there aren’t, and know something is awry. Instead, make a Plan B for a spot you can slip into after first surveying whether deer are present or not. In a worst-case scenario, hang back, call it a scouting evening, and plan to return another day.

Likewise, try to avoid spooking deer when leaving your stand in the evening. Don’t get down if you have half a dozen deer milling around below you. Wait until dark when you’re less visible, then maybe rustle around a little or simply try slipping out as quietly as possible in the opposite direction of where the deer are standing. The least amount of disturbance you can create, the better. Deer have better sight than we do at night, but they’re not bionic. I’ve quietly slipped out of a stand, and ambled off while bent over so as to look less like a human. If they can’t smell you and they can’t tell exactly where they are, they may just slip off, or they may even stay put until you’re gone. If you know you have to leave right in the middle of prime time, hunt another spot where you can slip away with minimal disturbance. Only hunt your best spots when the timing and conditions are right.

4. Keep Your Hands to Yourself

Don’t grab every branch you pass as you walk to your stand. Anytime you touch something, you are a trace of presence-alerting scent. Famed outdoorsman Eddie Salter says to imagine you have wet paint on your hands and body, and picture what the woods would look like if you brushed against and touched the trees you passed. You get the picture. It’s the same with scent. Wear rubber boots, which tend not to hold and transfer scent, and keep your hands to yourself as much as possible as you approach your stand.

Prior to the season, or during if you have to, slip in at midday and quietly cut hanging limbs and small saplings to create trails to your stands. As the leaves start falling, I’ve even gone in and raked a clear path so it didn’t sound like I was walking on potato chips every time I approached. Of course, if the season is already in and you have a stand set up tight to a bedding area where you suspect a bruiser to be hiding, don’t risk the added disturbance. Just do your best to keep quiet when it’s time to hunt the stand.

Place needed gear in a suitable pack and organize before heading off for your stand so as soon as you get there, you can set up or access what you need quietly and with minimal movement.

When accessing field stands through a field, walk in the middle of the field. But doesn’t that increase your risk of being seen by deer? If you’re walking in the field at all, the odds of nearby deer seeing you is already high. By walking through the middle, you keep your scent trail away from the edge of the woods so deer won’t come across it until they are well into the field—and in the open—themselves. By the time they hit your scent, it may well be too late for them.