Broad-spectrum herbicides and genetically modified crops have transformed American agriculture. But a growing body of evidence suggests that “clean” fields may be having an affect on Midwest deer populations. 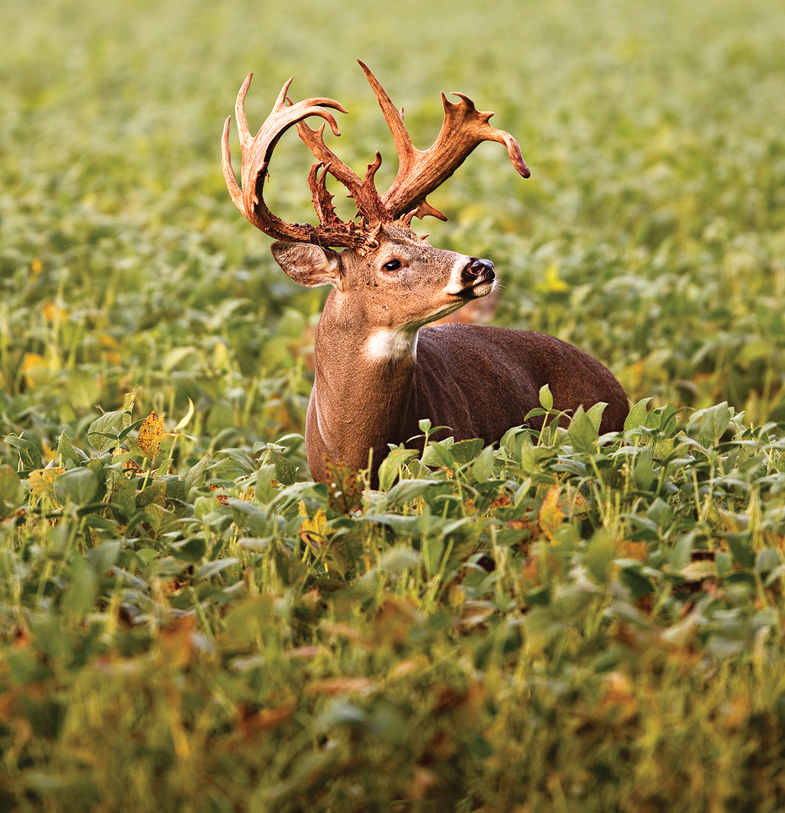 Find America’s corn and soybean belt on a map. Then find the counties that have produced the most trophy whitetail bucks. The overlap between the two is striking.

Whitetails have thrived in the presence of industrial grain production for decades, but some biologists and deer managers are suggesting that the newest farming practices aren’t universally good for deer. In part that’s because large-scale farms are so efficient that there’s little forage for wildlife once the crops are harvested, and partly it’s because farmers have become very good at killing weeds and other non-commodity vegetation, plants that wildlife biologists identify as habitat for everything from songbirds to whitetails.

I’m not that old, but I can remember a time when the corn and bean fields in my area of southern Michigan were quite different from today’s. Mainly, they were weedy.

Stalking through a field of standing corn in search of bedded whitetails wasn’t nearly the simple task it is now. Peering down the rows in the 1980s meant looking for patches of brown amidst the grasses that grew between them. Today? The space between each row is like an earthen highway from end to end, with nary a weed in sight. And that squeaky-clean agricultural landscape may be one reason deer across the Midwest are on a long and steady decline.

GMOs are the result of a laboratory process in which the genes from one species are extracted and inserted into the genes of another.
Today, roughly 90 percent of all agricultural corn planted in the United States is of the GMO variety, along with 95 percent of soybeans and 90 percent of canola, cotton, and sugar beets. Most of those GMO varieties—particularly corn and soybeans—are glyphosate-resistant. Glyphosate is a herbicide, not a GMO.

Such confusion is understandable. Glyphosate, a herbicide perhaps best known by its brand name, Roundup, has become the go-to chemical for farmers (and food plotters) who plant herbicide-resistant GMO corn and soybeans. Even the classification for seeds that are genetically modified to be resistant to glyphosate—Roundup Ready—indicates the close relationship between crop and herbicide. And the use of both is increasing. Data from the U.S. Department of Agriculture shows that herbicide use (with glyphosate being far and away the most used chemical) increased from 15 million pounds in 1996 to 159 million pounds in 2012. During that same period, whitetails have declined some tk percent.

A coincidence? Probably. But the inverse relationship between increases in genetically and chemically intensive agriculture and declining deer populations is unsettling to some observers.

NO SMOKING GUN
“Part of my job is to make sure I’m reading every bit of credible research I can that relates to whitetails and wildlife,” says Adams. “And there is not a single, credible, peer-reviewed study that I’m aware of that shows GMOs are bad for deer or bad for wildlife. And the same goes for glyphosate.”

But, Adams says, there might be GMO- and glyphosate-related impacts that are less easy to track.

“I think GMO crops and those treated with glyphosates are perfectly safe so long as you’re following the application directions, he says. “But I have seen some impacts from having such ‘clean’ plots and fields. I’ve noticed there is much less diversity in the plots and fields. That’s less habitat for wildlife.”

Approximately 90 million acres each of corn and soybeans were planted in the United States this year, the vast majority of which were GMO varieties treated with glyphosate. At just 1 percent of weed coverage, that’s 1.8 million acres of grassy habitat that could support wildlife and provide some measure of forage diversity for whitetails. But those 1.8 million acres are missing under GMO-dominated agricultural practices, and the heartland is also losing thousands of acres of grass-dominated Conservation Reserve Program acreage as landowners turn CRP ground into row crops.

The wholesale loss of weedy cover is something that’s worth discussing, Adams says.

“I used to be really fussy about weeds in my food plots,” he says. “But now I don’t worry about it quite as much, and I’m seeing more wildlife in and around them. It’s just an observation, but it’s something that makes sense, and I’m not the only one seeing the same things. A lot of deer managers are noticing the positive effects of weedy food plots.”

Jeff Sturgis, owner of Wildlife Habitat Solutions, makes his living by analyzing hunting parcels and providing their owners with a blueprint for habitat improvements. Like Adams, he believes GMO crops and glyphosate use is completely safe. But he thinks the “cleanliness” of ag fields and food plots can actually play into our hands as hunters.

“I’m a big believer in separation of food and cover,” Sturgis says. “I don’t necessarily want deer bedding in the same place that they’re feeding. Those clean fields and food sources mean the deer aren’t going to hang out there unless they’re feeding. To bed, they need to travel, and that makes them vulnerable to hunters.”

BUCK BRUSH
Volunteer weeds that can enhance your food plot

Obsessed food-plotters are really just small-scale farmers. And just like many of our commodity-scale neighbors, we instinctively abhor weeds. But just because a plant didn’t originate in a shiny plastic bag doesn’t mean it’s not deer food.

In fact, some of the weeds that infiltrate your plots can be just as palatable and nutritious as that brassica blend.

Below is a regional list of three species you may find sprouting up in your untreated food plots that a Quality Deer Management Association survey of state wildlife agencies revealed as important native browse for deer. 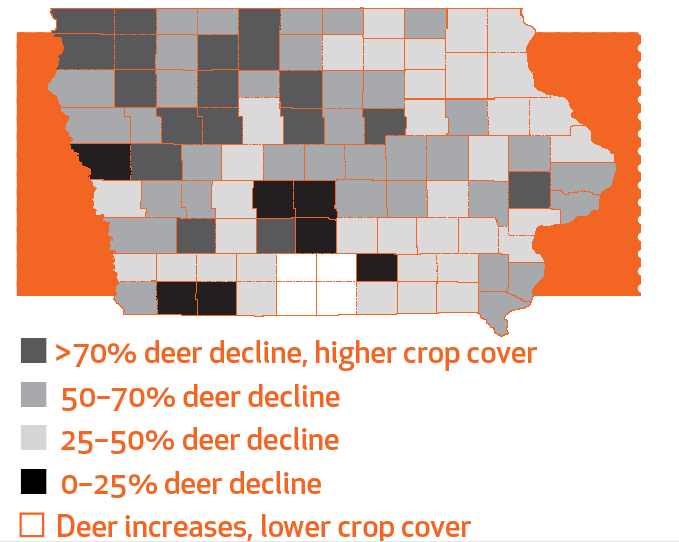 Deer and Crop Conversion in Iowa
In Iowa, where whitetail populations dropped 45 percent between 2003 and 2013, the declines have been most precipitous in counties with the greatest agricultural use. In southern and northeastern Iowa, in counties with rougher terrain and a lower percentage of crop coverage, deer declines have been about half the statewide average. Those counties have had a high percentage of CRP, but as this map indicates, they are also counties with the greatest CRP loss since 2008.

Standing corn and big bucks go hand in hand. But once the crop is harvested, deer rely on weeds and grasses for food.