Even if you're a die-hard treestand hunter, there's a time and a place for hunting from a ground blind 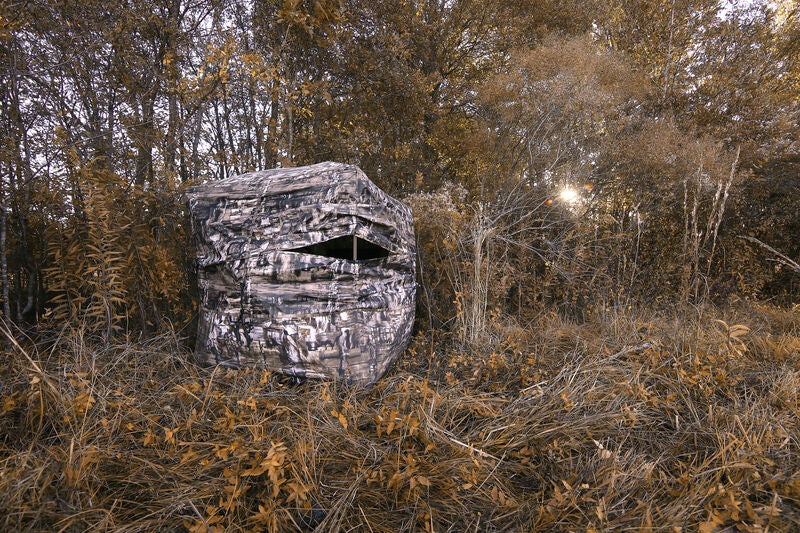 Either brush in your ground blind, or set it in a location where deer can get used to it, like this field edge setup. Primos Hunting
SHARE

When it comes to ground blinds versus treestands for mature whitetails, the choice for me has always been fairly easy. As in, if there’s any chance a treestand can work at a specific location, 9.9 times out of 10 you will find me up a tree, hugging bark. The reason is that treestands offer a litany of bowhunting advantages, not the least of which are far superior viewing of incoming game (allowing more time to adjust and prepare for a shot), and far more accurate judging of trophy quality (your elevated vantage point almost instantly clues you into rack width and other telling characteristics).

Still, I’ve done enough big-game hunting from ground blinds (primarily pronghorns), that I know these portable wonders can work magic when conditions are right. And when it comes to whitetails, I’m inspired to expand their use when I cross paths with and tap the knowledge of bowhunters who depend on them consistently. One such expert is Brooks Johnson, 47, president of Minnesota Bowhunters Inc.; our recent talk has me thinking I’ve got to devote more time to ground blind hunting this season. Conversing with the enigmatic Johnson can do that to a guy.

Johnson’s resume includes a long stint as co-owner of Double Bull Blinds (now owned by Primos Hunting), and during that 12-plus-year stretch Johnson traveled to literally dozens of states, where he hunted most species of North American game, from the ground. Even today, Johnson continues to depend on ground blinds regularly. Here are some things he has learned about using ground blinds to ambush mature whitetails.

”Another option is to set the blind out well in advance, so the encounter becomes part of their daily routine,” Johnson says. Just how far in advance? Johnson’s recommendation might surprise you. “For mature bucks, you’re looking at a few weeks. Mature bucks get old for a reason, and they need time to observe plenty of other deer hanging around that blind before they will come near it.”

One scenario that can throw a wrench in Johnson’s strict rules listed above is when decoys are involved. “I think decoys are one of the best ways to use a ground blind. And I’ll go so far as to say, for mature deer on a same-day set, the best-case scenario for that is with decoys. I always use a buck, and sometimes pair it with a doe. I like to use a full-body, realistic 3-D buck, and I’ll pair it with a Montana Decoy doe. Passing bucks will see that combo and think my fake buck has something he wants, and his focus is going to be on that buck decoy instead of the blind. It’s the envy factor.”

4. Set Up a Destination Ambush

Another of Johnson’s hard-won tips involves blind location. He advises against random deep woods sites and other obvious travel corridors, instead choosing to place his blinds where a mature buck wants to be. An isolated waterhole might be the best example. “Setting ground blinds where deer have options is not your best bet,” Johnson explained. “For example, if you have three trails running through the woods and set up on one of them, a mature buck will avoid the trail with the blind almost every time, and simply take one of the other trails. But when you have an isolated water hole, or maybe a bait situation or small food plot, that’s when those mature bucks will get used to your blind. And really, it’s because they have to. Anywhere water is scarce, and you have the opportunity to hunt waterholes, it’s just one of the best places in the world to set up a ground blind. At some point you’ll get to watch most every animal in the area.””

Another of Johnson’s favorite ground blind setups? Anywhere you find lots of deer concentrated, where drawing your bow undetected can be difficult, even from high treestands. “If there are a lot of eyes, and in a lot of areas that can be in conjunction with a prime water or food source, ground blinds are the ticket because you don’t have to worry about drawing.”

6. Deploy a Blind After Scouting

It was Clint Eastwood, as the iconic character Dirty Harry, who said, “A man’s got to know his limitations.” Hunkering in a ground blind has at least one glaring, undeniable weakness. “Blinds suck as a scouting tool,” Johnson admits, citing the extremely limited visibility in general, and especially in comparison to observing area deer movement 15 or more feet up in a treestand. So make sure your arsenal includes one or two of each and get ready to have some fun.

“A ground blind, especially for scouting new areas, is not the best tool in the world,” Johnson continued. “But once you have the deer pegged, a blind does so much to conceal your scent and movement it can be a tremendous advantage once you figure out what the deer are doing.”

Are you one of those bowhunters who simply packs away the blinds after spring turkey season? It might be time to consider some of Johnson’s sage advice and use them wisely this fall—to get the drop on one of the wisest animals to roam the fields and woods: a cagey old mature buck.