Last month 15-year-old Makayla Hay harvested this record-breaking buck in Madison County, Tex. Most other local hunters had hoped to... 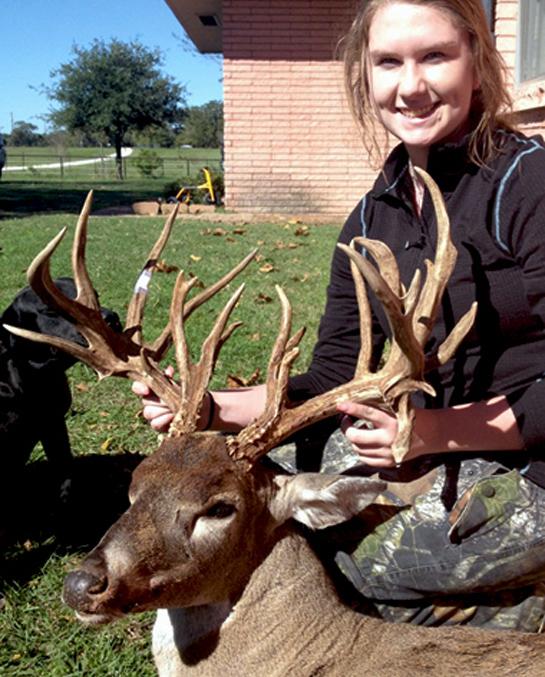 Last month 15-year-old Makayla Hay harvested this record-breaking buck in Madison County, Tex. Most other local hunters had hoped to tag the buck themselves, but Makayla took this gnarly bruiser minutes before sunrise on opening day.

The buck scored more than 200 inches and should become the second largest ever taken in the county. The Hay buck is also slated to join the Texas Big Game Awards as the largest free-range whitetail ever harvested by a youth in Texas.

About a month before the season opener a pair of fisherman snapped this photo of two bucks swimming in the Trinity River. Makayla’s father, Jim Hay, thought the buck might show up on the 1,600-acre lease they hunt.

On the morning of Nov. 2, Hay dropped Makayla at her blind in the predawn dark. She setup on a tree line with a good view of open cow pastures and wooded cover. A few does gathered around a nearby feeder just before sunrise. An eight-pointer also appeared, which she briefly considered. When another buck appeared on the scene, however, Makayla didn’t give the eight-pointer a second thought.

“A few minutes later this big deer walks out,” Makayla said. “And instead of seeing just a few points, there were tons of points going down on every side. And I decided I was going to shoot it because it’s better than any deer I’ve ever killed.”

Makayla routinely keeps her 7mm unloaded until she’s prepared to shoot. She took a moment to load the cartridges and raised her rifle. The buck was still standing 150 yards in front of her, just steps from where he entered the pasture. She lined up the crosshairs and squeezed the trigger. The buck dropped.

As she watched from the blind, the buck got to its feet. Predicting he was going to make a run for the fence, Makayla fired again. This time the buck stayed down. She contacted her dad and told him to come back to the blind, but didn’t offer details. “Waiting was very nerve-wracking,” Makayla said. “I couldn’t see [the buck] because he was laying in the grass, and I had no clue how many points it had.”

She hung around the blind for “five very long minutes” before her dad arrived from his own hunting spot nearby. “Usually I’d wait inside the blind until he gets there, but I was already out,” Makayla said. “He knew something was up, because I didn’t tell him what I’d shot.”

The pair approached the buck in disbelief. Makayla and her father disagreed about the buck’s identity. Hay insisted the deer was the same buck from the river, but Makayla didn’t think so. Referencing the photo proved Hay was correct. “I’m over here just trying to count points and he’s like, ‘You shot my deer,'” Makayla said. “I had to count several times because I just couldn’t believe it.”

By the time she finished counting Makayla had tallied 23 points. An official Boone and Crocket Club measurer scored the nontypical buck at 213 7/8 inches gross with a net score of 203 1/8 inches. “I’ve been hunting since [opening day], but it really changes your perspective on deer,” Makayla said. “Every deer I see now I’m like, ‘Oh that doesn’t compare to my deer.'”

And she would be hard-pressed to encounter another deer that matches her unique buck. The only nontypical whitetail currently on the B&C record books for Madison County is a 223 2/8-inch buck taken in 1967. That makes Makayla’s buck a shoo-in for the county’s second largest buck. Additionally the Hay buck is expected hold the record for the largest free-range whitetail ever taken by a youth in Texas after TBGA receives an official entry.