Having just returned from hunting the Ft. Benton area of Montana with Pheasants Forever, I have to tell you it’s... 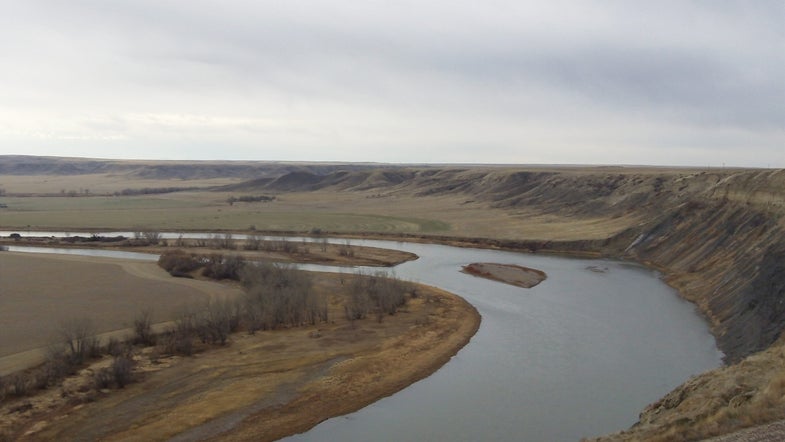 Having just returned from hunting the Ft. Benton area of Montana with Pheasants Forever, I have to tell you it’s in stark contrast to South Dakota. Especially a South Dakota ranch managed for pheasants and holding a preserve license. But this is true wild-bird hunting in thick, heavy cover for a variety of skittish avian prey and when you put one in the vest, you, and especially the dog, have earned it.

To tell you the truth, I enjoyed both hunting experiences. South Dakota was a blast, literally and figuratively, while Montana was tough hunting but with more than enough opportunities to keep me pushing through the thick cover. Both venues served their purposes.

South Dakota was about putting Browning and Winchester over-and-under shotguns through their paces while using Winchester ammo. Lots of shooting was required to get the feel of various guns and loads.

Montana on the other hand was purely about the wild birds and game available on the state’s public lands, the diversity of those lands and access, as well as the major contributions Pheasants Forever has made to those ends.

Don’t get me wrong, Montana was far from a slow hunt (I just moved here from New Jersey, if you want talk dismal pheasant opps that’s where to start!). It was a fun two days of hunting and the thick cover made it more so. You never knew where a pheasant, sharptail or hun might explode from the cover. Typically, they didn’t hold tight and were busting from the thickets, grass, woodlands and other cover ahead of the dogs or on the edges. Unexpected flushes kept all the hunters on edge and contributed to mental fatigue as much as some of the waist-high cover or tangled thickets did to physical fatigue.

A missed shot on this hunt caused me to cuss myself and vow to get into clay target shooting in one form or another. I did have my opportunities, however, especially on Day One.

On the first day we floated the Missouri River in canoes, hitting various island and shorelines (see the pic above for a bird’s-eye view of some of the spots). I should have had a limit, but my shooting sucked and I watched as several ringnecks quickly disappeared into distant woodlots or across the river into thick cover and private property.

Along with some great pheasant habitat, the islands provided jump-shooting opps for ducks and geese. Kona and I did just that on the last couple hundred yards of the last island. Six mallards, four drakes and two hens, that were hidden along the shoreline jumped up. I knocked a greenhead down and Kona retrieved it to hand. Day One ended with one pheasant and one mallard in my bag.

On Day Two, we saw lots and lots of hens, but only had a shot at a single rooster. I missed. Twice. My hunting partner Mike Harrelson with Montana Tourism, missed, too. A poor performance by both of us!

It wasn’t for lack of habitat or opportunities my game bag went unfilled. In fact, Montana has millions of acres open to public hunting. Although it might be a bit confusing at first (I’m still getting a handle on it and plan to sit down with the manager of the program to do just that!), the Block Management program does a great job of opening private lands to the public. The task is accomplished by catering to landowners and helping them manage public consumption, access times, how permission is granted and so on. This is a state that takes its relationship with landowners seriously, but they also take the hunting tradition just as serious and aim to do everything they can from becoming privatized and monopolized by outfitters and corporations. And they do all this while trying to keep a small government in balance.

The local Pheasants Forever chapters contribute to this worthwhile, and needed, endeavor by purchasing land and restoring habitats. Some of the big projects in Big Sky country include:

Coffee Creek: An 800-acre parcel purchased by the Central Montana Chapter of PF. It helped create a 2,000-acre block of property that has an upland game bird focus. In addition to purchasing and turning the property over to the state for public hunting, they improved it by adding nesting habitat, winter cover, food plots and travel lanes in the shrubs.

Wolf Creek: A smaller project than the other two, Wolf Creek is nonetheless critical. This 1,000-acre parcel was purchased by the Central Montana and Gallatin County Chapter of PF and consists of 100 acres of creek bottom and 900 acres of upland habitat. What makes this purchase so key is that it joins surrounding government lands to form 14,743 contiguous acres of public-access hunting!

No matter where you live, groups like Pheasants Forever need and deserve your support. PF’s best attribute is that 100% of the money raised by local chapters from donations, banquets, etc, stays in the community. The individual chapters get to decide where every penny of that money goes and what it gets used for; and that’s the way it should be.