Things You Didn’t Know About Deerhounds

On Tuesday night GCH Foxcliffe Hickory Wind, or Hickory for short, became the first Scottish Deerhound in the Westminster Kennel... 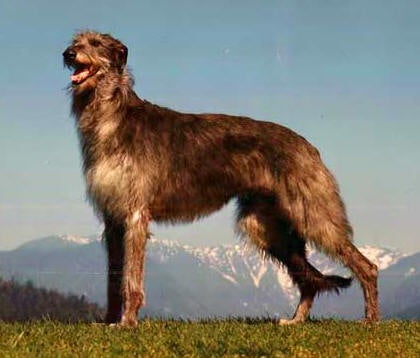 On Tuesday night GCH Foxcliffe Hickory Wind, or Hickory for short, became the first Scottish Deerhound in the Westminster Kennel Club’s history to be named Best in Show. Because this is the first time this breed has reached such a prominent position, many fans were left asking,” What’s a Scottish Deerhound?” Luckily, Gayne’s here to answer that question.

The Scottish Deerhound breed is so old that no one is exactly sure where it came from. Some historians believe that the breed was once identical to the Irish Wolfdog while others argue that the breed is the descendents of the hounds of the Picts. Personally, I doubt the latter as the breed would then be known as “Scottish Roman Soldier Killing Hound.” It’s funny if you know your history. Trust me. Ok, I’ll wait while you Google it…Are you back? Pretty funny huh?

Scottish Deerhounds were bred to run down red deer, a large European elk that weighs upwards of 250 pounds.

The breed was once thought only worthy of nobility. This exclusivity was problematic for the breed for by 1769 very few dogs existed and the breed almost went bye bye. Yes, “bye bye” is the technical term for the disappearance of a breed.

Because the breed is so good at quietly running down game they were once the favorite breed of poachers. So between 1600 and 1800 only nobility and poachers had Scottish Deerhounds. This made for fairly uncomfortable interactions when the two groups ran into one another at Pet Smart.

Because the breed is so “people friendly” they are rarely raised in kennels. Instead, they are raised in the home. This is a nightmare for people that raise both Scottish Deerhounds and red deer in their home.

Roughly one in 18 dogs will experience neck pain. What? There’s nothing funny to say about neck pain. It’s horrible.

In the U.S the breed has been used successfully to hunt rabbits, boar, coyotes and wolves.

In Australia they have been used successfully to hunt kangaroo and wild boar.

I have never seen a Scottish Deerhound in person.

Know anything interesting about the breed? Have one? Comment below.