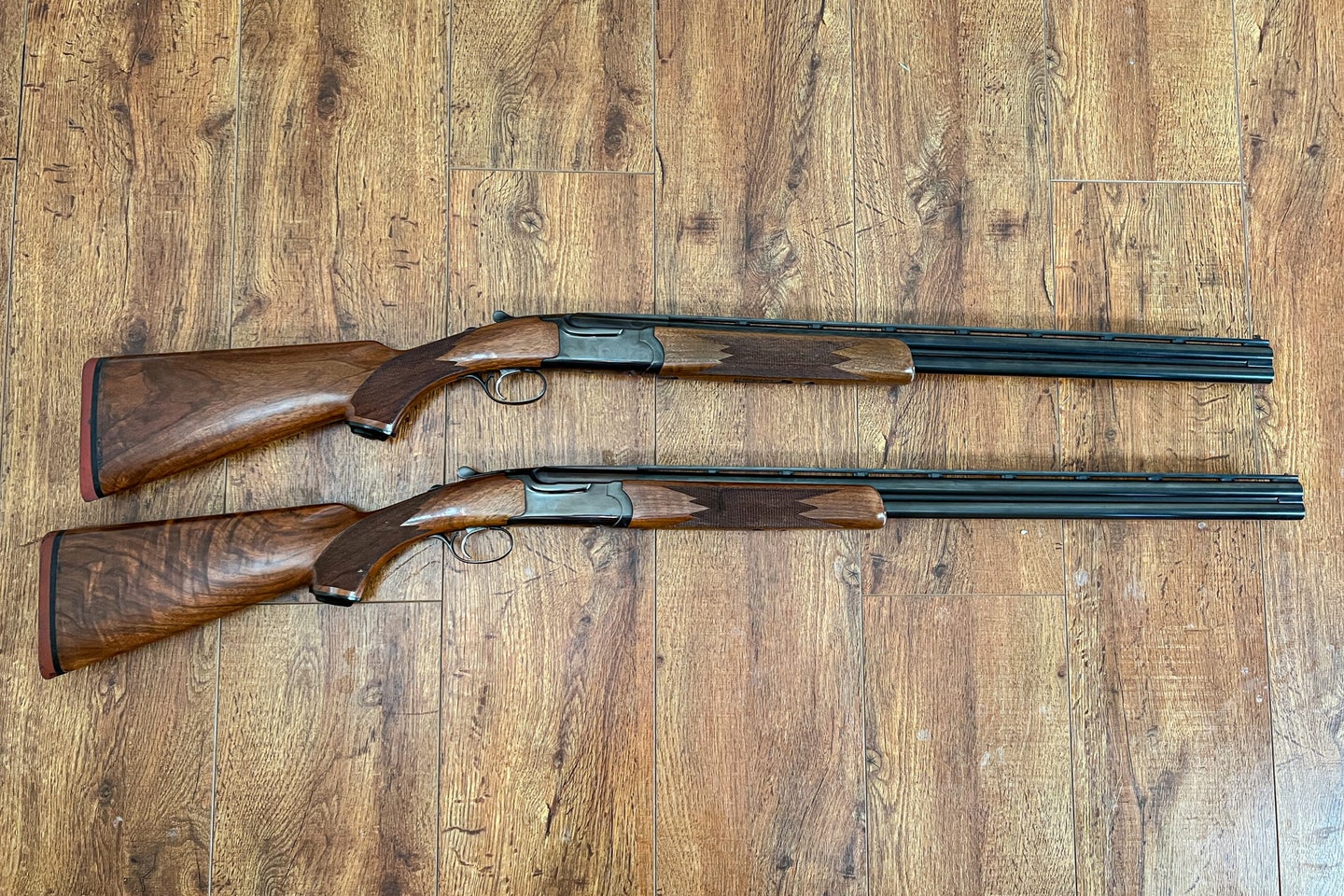 In the early 1970s, Bill Ruger, co-founder of Sturm, Ruger, and Company, recognized a hole in the over/under shotgun market. At the time, most fine double-barrel shotguns were being imported to the U.S. from Europe (as they had for decades). They were expensive and often unobtainable for working-class hunters. Keen on filling that void, Ruger went to work designing and engineering a functional, less expensive American-made over/under—the Ruger Red Label. By 1977, the first Red Labels hit gun store shelves. The Red Label enjoyed a production run of more than 30 years, but manufacturing costs doomed the double gun. However, the Ruger Red Label continues to be a favorite of serious upland hunters across the country as well as a collector’s item for shotgun aficionados.

The Introduction of the Ruger Red Label

The first production Ruger Red Labels were 20 gauges, not 12s (though both gauges were announced at the same time). Two years later, Ruger launched the 12-guage followed by a 28 in 1994. From its conception, the Red Label was billed as a well-built, reliable break-action. Red Labels originally sold for $480, which wasn’t overly pricey for an over/under of that stature. Adjusted for inflation, the Red Label would cost $2,271 today.

Aesthetically, the Red Label stuck with Ruger’s mantra of practicality. Early Red Labels featured a simple oil-finished walnut stock with checkering on the pistol grip or straight English-style stock and fore-end. The gun had a blued receiver, forged barrels, vent rib, and Ruger’s signature red recoil pad. Over the years, Red Labels were offered in a variety of styles and options, including a stainless-steel receiver model in 1985 that continues to be one of the most recognizable variants. There was also a unique single-barrel trap gun introduced in 2000. Until the late 1980s, all Red Label barrels had fixed chokes. Starting in 1988, screw-in chokes were optional and became standard on all models by 1991.

What the Red Label lacked in curb appeal, it made up for with ultra-reliable mechanics. Red Labels use a convenient sliding safety, located near the rear of the tang, that doubles as a barrel selector. Another feature unique to the Red Label is in its trigger design. Unlike some over/under shotguns, the Red Label’s trigger does not need the recoil from the first shot to reset the trigger for a follow-up. If you allow the trigger to travel fully forward after the first pull, it resets, and fires the second shell.

“We make the finest pair of shotgun barrels that could ever be built,” said Bill Ruger in an excerpt from R.L. Wilson’s book Ruger and His Guns. “We put the money into the machine instead of in hand labor. All the great, old-time gunsmiths—the men who made the beautiful things—are today building the beautiful equipment to build the beautiful things. Perhaps you could say that, except for engraving, gold inlaying and elegant finish, [by] using machines, you can easily surpass the work of the finest person in terms of truly mechanical movement, the precision of the apparatus. You have to remember—fine watches are not made with files.”

The Red Label did have some shortcomings. Shooters primarily griped about the hefty weight (12 gauges weighed between 7½ to 8 pounds) and awkward balance point due to the excess forward weight in the barrels. Having a pair of 20-gauge Red Labels myself, I think it comes down to personal preference. My 20s are on the heavy side (7 pounds, 3 ounces) for a sub-gauge over/under, but that same weight also helps my swing and follow through and dampens felt recoil.

The Red Label Is Discontinued

The demise of the Red Label came down to the ethos Ruger built the gun around — price. As costs for manufacturing and raw materials continued to climb, so did the price of the Red Label. When the line was dropped in 2011, the cost for a new Red Label was nearly $2,000. That hefty price tag pitted the Red Label against several other well-made, affordable over/under shotguns, including the Browning Citori, and sales dropped dramatically.

Two years later, Ruger rebirthed the Red Label in a 12-gauge model after going through a deep redesign to cut costs and maintain functionality. The new Red Label hit shelves with an MSRP of $1,300. The second-generation Red Label appeared similar to its predecessors but featured a few welcomed changes. Ruger was able to lighten the gun’s weight to 7 pounds, 5 ounces, primarily by trimming down the barrel weight. They also slightly adjusted the length of pull to 14½ inches and the drop at comb (1½ inches) and heel (2½ inches).

Mechanically, Ruger made minor modifications to the original design, but the goal was not to reinvent the gun, rather to streamline the manufacturing process. A major change was a newly designed one-piece frame and tang as opposed to the two parts being welded together as in previous models. Unfortunately, its revamp was short lived due to the continued rise of manufacturing costs.

“Our primary goal was to take out some of the complexity of manufacturing to reduce the cost of production,” said Michael Sylvester, a veteran engineer from Ruger and die-hard Red Label enthusiast.

I was gifted of a pair of 20-gauge Ruger Red Label shotguns by an older gentleman who I hunted deer, elk, and antelope with. He spent years hunting bobwhite quail in southern Georgia with both guns. The bluing is worn at the bottom of one of the gun’s actions, the result of many seasons in pursuit of covey rises.

According to the serial numbers, both Red Labels were manufactured in 1983. One of them sports a fixed skeet/skeet set of barrels and the other a modified/improved cylinder pairing. The skeet/skeet Red Label was my friend’s go-to gun for hunting quail in tight quarters while the improved cylinder/modified scattergun was primarily used for sporting clays.

I have spent many days afield with both guns and grown quite fond of them. Most importantly, I shoot them well. The weight has never bothered me. My only complaint is the wood-to-metal fit. It’s not flush, but that certainly doesn’t affect the performance of the Ruger.

Prior to writing this article, I had never patterned my Red Labels. For testing, I shot Winchester’s 3-inch Game Loads—1 1/8-ounce payload of No. 7.5 shot—at 30 yards (the typical distance you would shoot a flushing pheasant or chukar) inside a 30-inch circle. The skeet/skeet Red Label averaged 48 percent patterns at 30 yards with an average of 189 pellets impacting inside the 30-inch circle. The improved cylinder barrel produced a higher pattern density of 64 percent while the modified barrel produced a 71 percent pattern (279 pellets). It is also worth noting that the center of the pattern was consistently near my point of aim.

Read Next: The Best Over/Under Shotguns for Less than $1,000

You can still find a Red Label on the used market. Most don’t cost more than $1,500. It is still a reliable and sought-after American-made shotgun, and a great buy if you find one at that price in good condition. It’s unfortunate the Red Label isn’t still in production. Because you could argue that it was one of the best affordable American-made over/unders—along with the Remington 32 and Marlin 90—ever produced. Currently, no gun manufacturer makes a comparably priced over/under in the U.S. There are high-end doubles built by Kolar and Connecticut Shotgun Manufacturing Company, but today’s working-class hunter is out of luck if they want to buy American.