Nicknamed “Blades” for his distinctive browtines, this Ohio buck is the deer of a lifetime 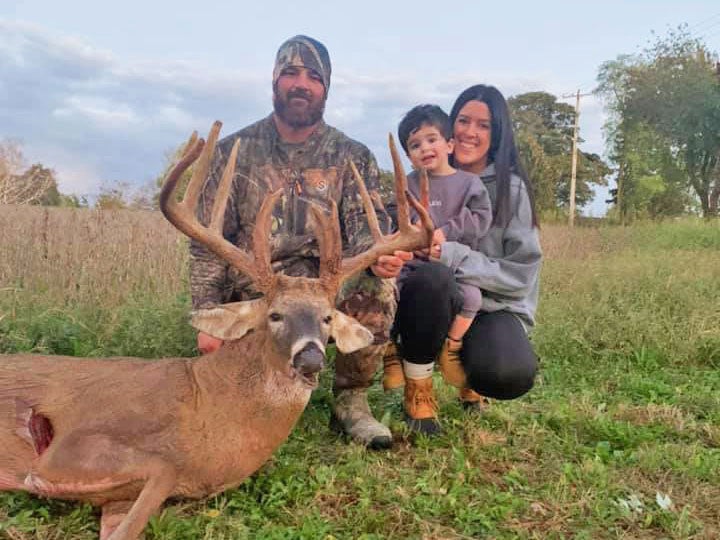 Kevin Miller celebrates the buck of a lifetime with his family. Kevin Miller
SHARE

In early 2020 Kevin Miller, 31, got permission to bowhunt a friend’s 40-acre farm in Ohio. Soon enough, he recorded trail cam photos of a giant 10-pointer in velvet. Miller didn’t know it then, but he’d spend more than a year chasing that deer and obsessing over it. It’d be the biggest buck the 12-year Air Force veteran had ever killed.

The buck had distinctive large fan-like brow tines, so Miller named him “Blades.” As the summer progressed Miller was still getting photos of Blades, but soon he realized the old buck was camera shy.

“Once he shed velvet he stopped appearing on my cameras, so I moved them to a new farm area, and got pictures of him again,” says Miller. “But once Blades saw a camera or knew it was there, he wouldn’t show up at the spot.”

Miller says he got photos of the buck shying away from cameras 50 to 60 yards away. At one place he set a trail camera near a fresh scrape. The buck hit it and he got night photos of Blades. Miller hunted the scrape site, but with no luck. A week later he got more photos of the buck at the scrape, and it was the last pictures of the buck on the 40-acre farm in 2020.

There was an adjoining 400-acre farm beside the smaller 40-acre farm, and Miller believed Blades was spending his time on the bigger parcel. That winter he got permission to hunt the 400-acre farm, placed trail cameras on it, and got photos of Blades.

Miller spent the rest of the year and into 2021 prospecting the 400-acre farm with cameras trying to pattern Blades.

“I started writing on a calendar when I got pictures of Blades, at what location, and what the wind direction was, because that was the only way I would find some pattern about him,” Miller says. “I never found his shed antlers, and lost [camera] track of him after February, 2021.”

Miller was obsessed with Blades, and begin scouting both farms in earnest trying to figure the old buck’s haunts.

“I set out seven different mineral stations and 38 cell cameras on the farms,” Miller says. “I started getting photos of him in early June, 2021 on the 40-acre farm, which now was planted in corn. His summer range was mainly on the 40-acre farm and on half the 400-acre farm.”

Miller learned from a video by deer hunting guru Don Higgins that mature bucks use the same areas on the same dates from one year to the next. Banking on that information, Miller discovered that Blades was indeed following the same pattern he had the previous year.

To deal with Blade’s camera shyness, Miller placed cameras high off the ground, 10 feet high in some spots. And he set cameras in new places.

Eventually Miller learned that Blades was hitting one scrape every five to seven days. To keep the buck excited about the scrape, Miller touched-up the spot with different scrape urine scents, hoping Blades would believe different bucks and does were working the scrape.

“I wanted to make Blades mad so he’d keep coming to the scrape,” Miller stated.

Early on Oct. 13, Blades worked the scrape as a cold front with perfect wind conditions set in. Miller hunted the scrape from a climbing tree stand the evenings of Oct. 15 and 16, seeing only a few does. He hunted the spot again beginning the early afternoon of Oct. 17, freshening the spot with Black Widow Scrape Master scent before heading up with a climbing tree stand.

Soon, a flock of turkeys showed, and Miller had to remain motionless for 90 minutes as the wary birds picked their way through the area. Then a small 8-point buck came by his stand.

About 5:30, Miller caught some movement and branches moving near the scrape but couldn’t see the deer because a large tree blocking his view.

“But once he put his head down, I realized it was Blades and I almost went into shock and felt like I was having a heart attack” says Miller.

Blades worked the scrape, then laid on the spot for a time. He stayed nearby for 15 minutes without offering Miller a shot. Then Blades turned and started leaving, heading back to a corn field.

At 45 yards, the buck crossed a clearing, quartering away from Miller. He raised his TenPoint Vapor 470 crossbow, aimed, and sent an arrow through the top of Blades’ heart. The buck fell dead just 100 yards from Miller.

The buck field dressed at a giant 258 pounds, with a live weight estimated at over 300. Blades’ age is estimated at 7.5 years. The buck’s huge body size made its rack look smaller that it really was. Miller believed the buck would score about 180.

But the green Buckmasters rack score for Blades is a massive 203 3/8 inches. The whole experience was an emotional roller coaster, Miller says. It’s the biggest buck of his life.

“Even after he was down, I couldn’t talk clearly for 30 minutes,” he remembers. “Just the amount of time. Work between scouting, planting food. Plus, all my friends and family, who helped—it was one heck of a ride.”