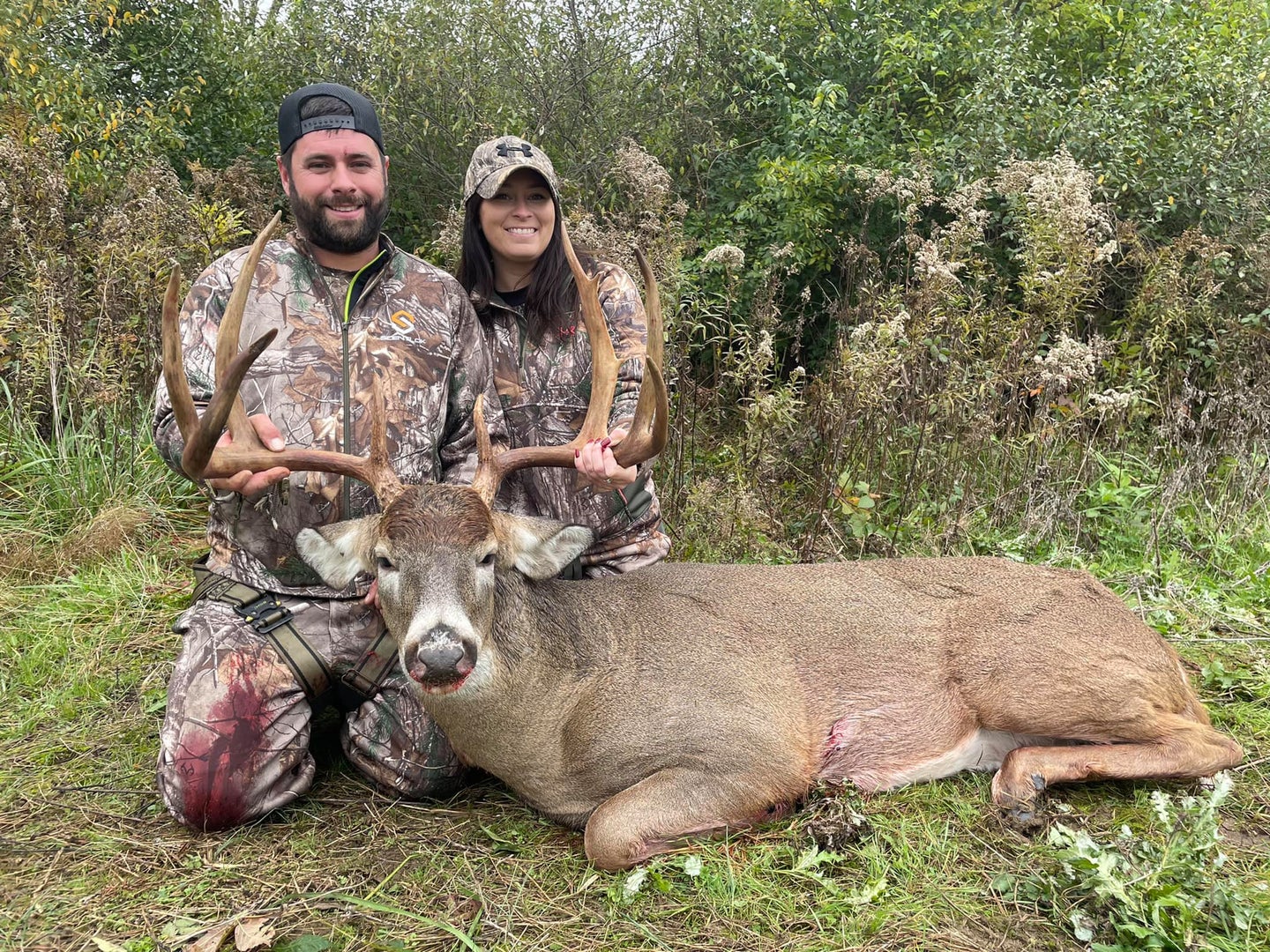 Jake Pohl's girlfriend, Kristina, was hunting a nearby blind when Ocho fell.
SHARE

Early Sunday morning, Oct. 31, Jake Pohl didn’t really feel like rolling out of bed before dawn to hunt deer. After all, it was Halloween and it was likely going to be a long day and night. But his girlfriend Kristina Ferguson prodded him to go, because she wanted to hunt, too. She had killed an 8-pointer last year with her crossbow and was hoping to tag another buck this year.

“I didn’t have high hopes for hunting that morning, but Kristina wanted to go, and as it turned out I wouldn’t have shot the best buck of my life if she hadn’t insisted we hunt,” says Pohl, 31, a cement finisher from Dayton, Ohio.

So the pair headed for a small section of private land that has a patch of woods between farm fields. Deer use that timber as a travel corridor. Well before dawn Kristina got into a ground blind while Pohl headed to a treestand about 100 yards away. During the 2020 season, got trail-camera photos of a giant buck in this patch of woods, and he hoped to see that deer again.

“In scouting the spot last year, I found a great line of massive scrapes,” says Pohl. “I set a trail camera there and that’s when I got photos of the buck we called Ocho—the Spanish word for eight, because of his big eight points.”

In July 2021 Pohl put up a stand in the narrow woods corridor plus a trail camera to monitor the place. He wanted to do that work in summer then stay out of the area until deer season. He started getting regular trail camera photos of Ocho.

In late September he went to the spot and made a mock scrape, complete with an overhanging limb. He did that work just before a heavy rain came to wash away his scent. Then Pohl started monitoring photos of his mock scrape and nearby trail, watching for the great buck.

“Ocho started hitting the mock scape in late September, and I have photos of him working it while still in velvet on Sept. 25,” says Pohl. “The first time I bowhunted the spot was in early October during a cold front in perfect conditions. But I didn’t see a thing.”

That Oct. 31 daybreak hunt didn’t start well for Pohl. Early on, a mature doe winded him and blew a maddening alarm for a full two minutes, he says. The doe eventually wandered away, but she returned, blowing and stomping her feet again.

“I figured that doe let every deer around know something was up, and my chance for Ocho was over,” says Pohl. “But about 9:30 a.m. I looked up and there was Ocho, standing just 30 yards from me. He stepped out of the brush onto the trail I walked in on and I thought for sure he’d wind me like the doe had. Ocho stopped for a second, then started up the trail right to me.”

The buck was slightly quartering toward Pohl at 30 yards. But the angle was good enough. He drew and shot.

“I was breathing heavy and watched Ocho race across a field,” he says. “Then I saw tall weeds wiggling like crazy next to the field and I figured he fell right there. I called Kristina and my buddy Dan Frey, and we all met where I shot the deer. We found bubbles with blood, and I knew it was going to be a short tracking job.”

They looked for the buck for only 20 minutes. Ocho had traveled just 100 yards, falling in the weeds that Pohl had spotted moving.

Before heading to the taxidermist, the first place Jake Pohl went with Ocho was to show the deer to his father Mike. Pohl learned to hunt from his dad and had killed his first buck with a crossbow at age 14.

“I learned everything I know about hunting from you,” Pohl told his father, who due to illness no longer can hunt and is wheelchair bound. “You’re the reason I’m the hunter I am, and why I took this buck, Ocho. Thank you for everything.”