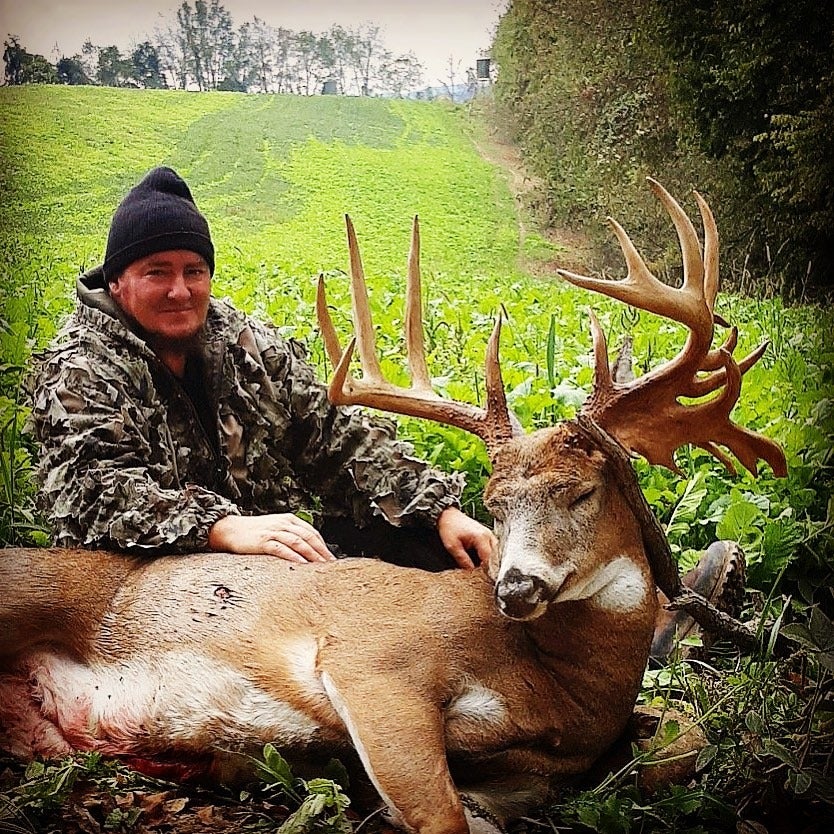 Amos Herschberger with his stud of an Ohio early-season buck.
SHARE

Amos Herschberger, 42, of Beech City, Ohio (southeast of Canton) lives to hunt whitetail deer, and knew where and when a giant of a buck was passing near his hay-bale ground blind.

He’d patterned the buck for two years, using cellular trail cameras to monitor the deer on his 300-acre hunting property. He owns the land with Duane Coblentz, his brother-in-law and roofing business partner.

Ohio’s bow deer season opened Saturday, Sept. 25, but the wind was wrong for Amos to hunt the hay bale blind. So he waited for a wind shift to try for the big non-typical that he has thousands of photos of from four different trail cameras.

“One of my trail cameras showed the buck passed within bow range of my blind on opening weekend, and I knew the deer was coming out there in early evening,” says Herschberger. “I watched the wind and weather, and knew Monday was the day to try the blind for the buck.”

Herschberger is adamant about scent control. He showered that afternoon before the hunt, washed his hunting clothes, then drove to the farm where a farmer friend, Ivan Weaver, gave Amos a lift out to the blind on a tractor.

“I figured the deer wouldn’t think much of a tractor going to the bale because they see it all the time,” he says. “The blind had been there for three weeks and deer paid it no mind.

“So Ivan drove me out, I got in, changed into my hunting clothes that were in a bag, and I handed my street clothes back to Ivan in the tractor. Then he drove away.”

The scent control process paid off when does and small bucks passed by his blind shortly thereafter.

“They were so close I could have touched them with my crossbow through a shooting hole in the bales,” he says.

Dozens of deer passed close to the hay blind without detecting Amos until early that evening. Right on time, according to previous trail camera photos, the giant buck stepped out into the open at 32 yards.

It was the first time Amos had ever seen the deer on hoof.

“When he stepped out he looked right at me, and I couldn’t shoot,” Amos says. “He stood there a couple minutes, then turned broadside to look at another buck, and I took my shot.”

Amos thought the hit was good, but a bit back. So he wisely waited to track the deer until the next day, with friend Brian Yoder who has a tracking dog.

“The buck went about 250 yards from where I shot,” says Amos. “He made a big circle and died near the blind. The arrow completely passed through the buck, taking out one lung and the liver. He didn’t go far, but we wanted to play it safe and waited until dawn.”

Amos used a Ravin crossbow and a two-blade Rage expandable broadhead to take the buck.

Two good hunters and friends of Amos’ each green scored the non-typical buck at between 195 to 196, but an official score can’t be made until the rack is done drying in 60 days.

Amos is thankful for the chance take such an incredible animal.

“I’m just an Amish country bumpkin who loves to hunt deer and the outdoors, and praises the Lord every morning,” he says. “I have so many people who have helped me take this buck, including Don Higgins, who taught me so much about deer, and hunting big ones.”

Amos is mentoring a 10-year-old handicapped, fatherless boy to take a deer on his 300-acre property soon. And in two weeks he and son Duane and father Norman will head to Montana.

“That will probably be the only time three generations of our family will be in elk camp at the same time, which makes it a very special for me,” says Amos.