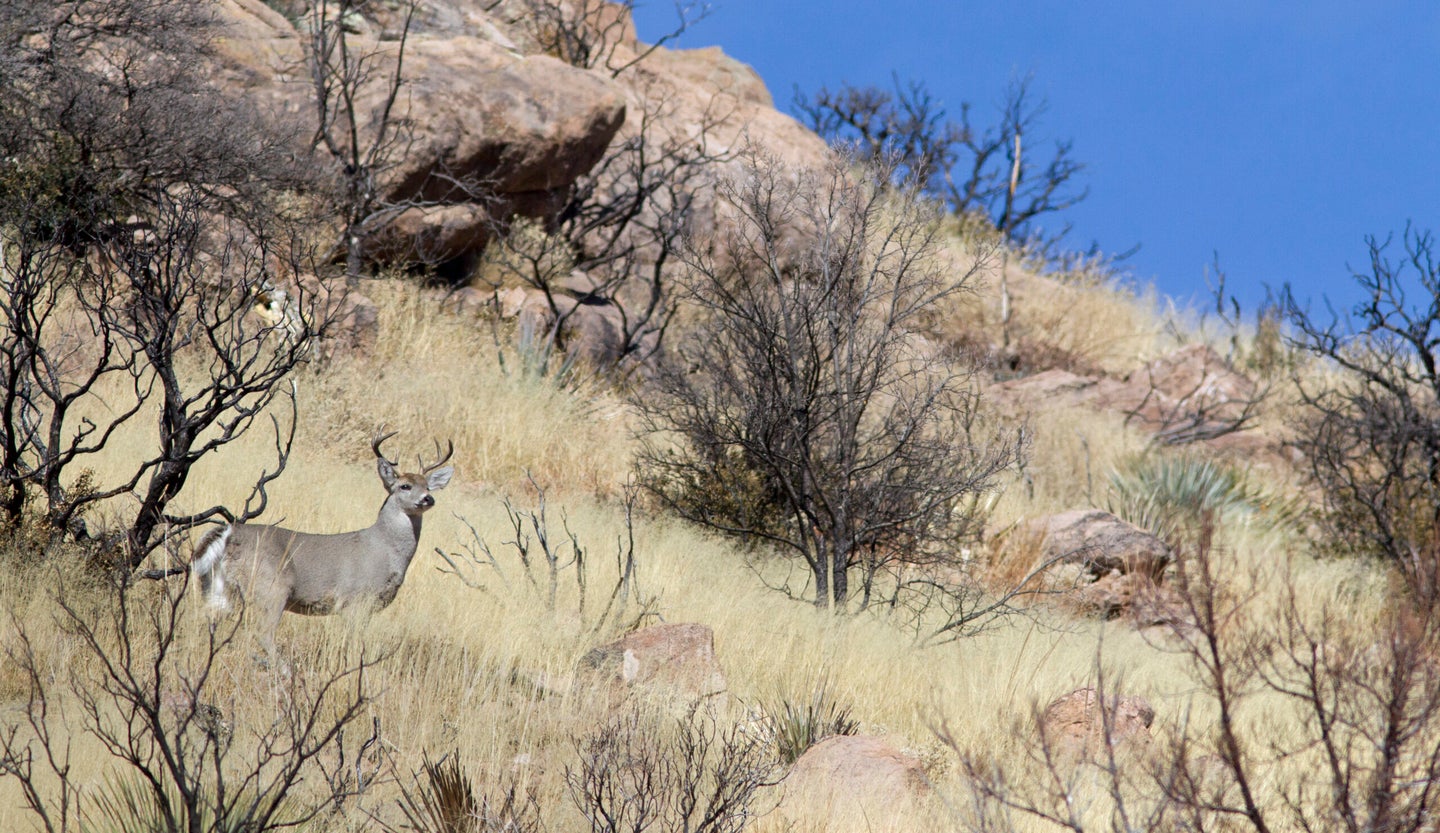 It doesn’t matter that Coues deer are tiny whitetails with undersized antlers. The physical and mental challenge of hunting mature desert bucks isn’t just worth it—it’s the whole point

WE’RE STARTING to get restless when Jordan spots the buck. I’m still not sure how he saw the tiny Coues deer from 2,000 yards away. The wind is making my own binocular shiver on its tripod, and there’s an irritating shimmer in the air as the morning sun heats the cold desert.

Three of us camped high on this mesa last night, waking just before daybreak and hustling to the rim to post up. Even after four days’ practice glassing this canyon and each of us scouring a different section of terrain for hours, this is the first Coues deer we’ve spotted today.

When Jordan has successfully walked me and our buddy Aram through the business of finding the spot in our own binos, it takes another minute to actually see the deer. It’s only after I pick apart the shadow and sunshine dappling his hide and untangle his antlers from the dried century plant stalks that the full deer materializes.

We watch him bed just below a high ridge, the wind at his back and a mile-wide gulf between us. Even though this buck is smaller in both body and antlers than the last dozen deer I passed at home in the Midwest, there’s no discussion about whether the 8-point is a shooter. Instead, we dump our coffee dregs and pack our optics. The wedge of warm sunlight he’s bedded in won’t last; soon the sun will dip behind him, and he’ll get up and follow it over the ridge and out of sight. There’s no time to break camp. We leave our tents pitched, shoulder our packs, and scramble down the mountain.

“Is that your game camera?” Aram von Benedikt asked, pointing to a trail cam hanging on a slender mesquite tree.

“Nope, that probably belongs to Border Patrol,” said Andy, the Arizona rancher who was giving us a tour of the public land beyond his own on the day before the opener. He is Jordan Voigt’s cousin, and accessing the public ground through his property would save us several miles of packing in and out.

We were just a few miles north of the Mexican border. The country is so rough that it’s as difficult for Border Patrol to police as it is for migrant workers to cross. Rather, this main canyon is used by drug runners, Andy said. A ranch hand was shot and killed here by cartel men years ago; these days, there are tattered blankets, water bottles, and old shoes strewn in sheltered corners of the canyon. But even the threat of running into armed corredores wasn’t enough to deter us.

When we set out to make camp and scout the canyons, Jordan hoisted his heavy pack easily and led the way. His experience as a sheep guide in Alaska was apparent—and welcome—as he chose paths that made the nearly vertical climbs less treacherous, avoiding loose rocks and making his own switchbacks.

Meanwhile Aram, the ballistics buff and veteran Coues hunter of the group, pointed out plants as we worked our way up the rock face. Each sounded more hazardous than the last: blue thorn, alligator juniper, shin dagger. He identified towering century plants, spiky ocotillo, and barrel cacti topped with halos of yellow fruit. The region is in a drought, and it was rare to hike past a barrel cactus without seeing bites of fruit missing—a sure sign deer had passed this way.

Aram’s botany lesson was interesting, but I didn’t realize its true purpose until we began glassing on opening morning. I had worried that my contributions as a Midwestern whitetail hunter would prove useless next to Jordan’s and Aram’s, but neither had spotted deer either. We were about to relocate when I finally saw our first bunch. “Look, just above that clump of ocotillo. There are a couple little bucks eating whatever’s falling off that tree.”

Aram brightened and located them in his spotting scope. A minute later, he discovered another deer near the group. It was a lone buck that warranted closer examination. Aram, Jordan, and I strapped on our packs and hustled into the only available shooting position: a rocky point across the canyon. One look through the spotter confirmed what Aram had suspected. “That is a nice buck,” he said. “I’ve never shot a Coues deer that big. I’d like to take him.”

And he did, with a single, perfect shot from 587 yards.

Of course, “big” is relative. For a typical whitetail buck to be entered in the Boone and Crockett Club records, the minimum score is 160 inches; for a Coues deer, it’s 100. As Aram knelt by his buck, he palmed the antlers, estimating the length of their main beams. Some might think it foolish to chase a few extra inches of antler on such a relatively small buck. But Aram’s focus on trying to take a critter larger than his last—in this case, an old, wise Coues buck that pushed record-book status—has shaped him into an expert hunter. Hunting the West with a hunter like Aram has made me learn faster and hunt harder too.

The conclusion of his hunt was a reminder of the shot distances this species and terrain require, and Jordan and I spent much of the next day shooting our rifles. Aram ranged targets and called the wind for us, and we practiced pounding them out to 400, 500, 600 yards. I’d shot out to 1,000 yards before, but that was more to see if I could than to practice. Long-range hunting was a new skill set for me, and one I was willing to learn if it would help me kill a Coues deer.

When we spotted Jordan’s buck that evening, at last light atop a distant ridge, we sprinted to close the distance from 1,400 yards to 500. Jordan made a superb shot up the mountain, which took half an hour to climb. We were nearly to the top when he found his beautiful little buck, legs tangled in cactus where it fell.

And just like that, I was the last one with a tag.

‘As Good as It Gets’

By the time we haul ass to the base of a big rock spire, we can’t see the buck Jordan spotted anymore. Sweating and huffing, we make the nearly vertical ascent as quickly as we can. But as we arrive, the buck gets lazily to his feet.

“He’s going over the ridge,” Aram says, opening the tripod for his spotter. “This is as good as it gets.”

As I settle behind my rifle on a pile of rocks, Aram gives the range. I wait as long as I dare to calm my heart rate after the steep climb, then squeeze the trigger.

Aram has a knack for numbers. He remembers the precise yardage of a shot, the elevation, the windage. I forget these things as soon as they become inessential. I hold them in my mind long enough to apply them and don’t notice when they slip away. The “547 yards” Aram told me becomes an approximate 545 even as I’m walking up to my deer. Later I’ll just remember it as north of 500.

I admire the little buck, then get to work. Slicing the hide along each leg reveals silver skin speckled with cactus spines; the same shin dagger points that have stabbed through my gaiters all week have broken off in his legs and worked into his flesh over the years. I appreciate this buck all the more, and the fact that his species can thrive in such rugged country, with every stroke of my knife.

The Measure of a Buck

Back at the old ranch house, we gather around the butcher block in the kitchen. Aram spreads cardboard on it before plunking down the first skull. Andy sits with a cowboy boot resting across one knee, pencil at the ready. We all guess the scores before Aram expertly slips the measuring tape around the antlers.

Despite my never having bothered to score a deer in my life, my estimates are the closest, and within 3/8 inch for two of the racks. My buck is the smallest, a designation no one mentions and that I wouldn’t care about if they did. I will forget this number—95 7/8 inches—within the week. The hindquarters hanging in the cool shade outside will last longer. The skull, which I will boil and scrub myself, will make its way to my office. Unlike those of the Midwestern whitetails on the wall above—one of which is a good 70-plus inches larger—this buck’s antlers will rest on a side table. There I can pick them up whenever I want, to better see the swell of one main beam or the faint smear of blood where I first touched the desert-burnished bone. I don’t wish the other, bigger racks belonged to me, handsome though they are. Each deer has its own unique meaning to each hunter. Such a thing can’t really be measured, so I don’t bother to try.