Ohio Crossbow Hunter Wakes Up to Kill a 180-Inch Whitetail

Tyler Roberts dozed off after he thought his hunt was blown, but woke up to find a giant buck 25 yards from his ground blind 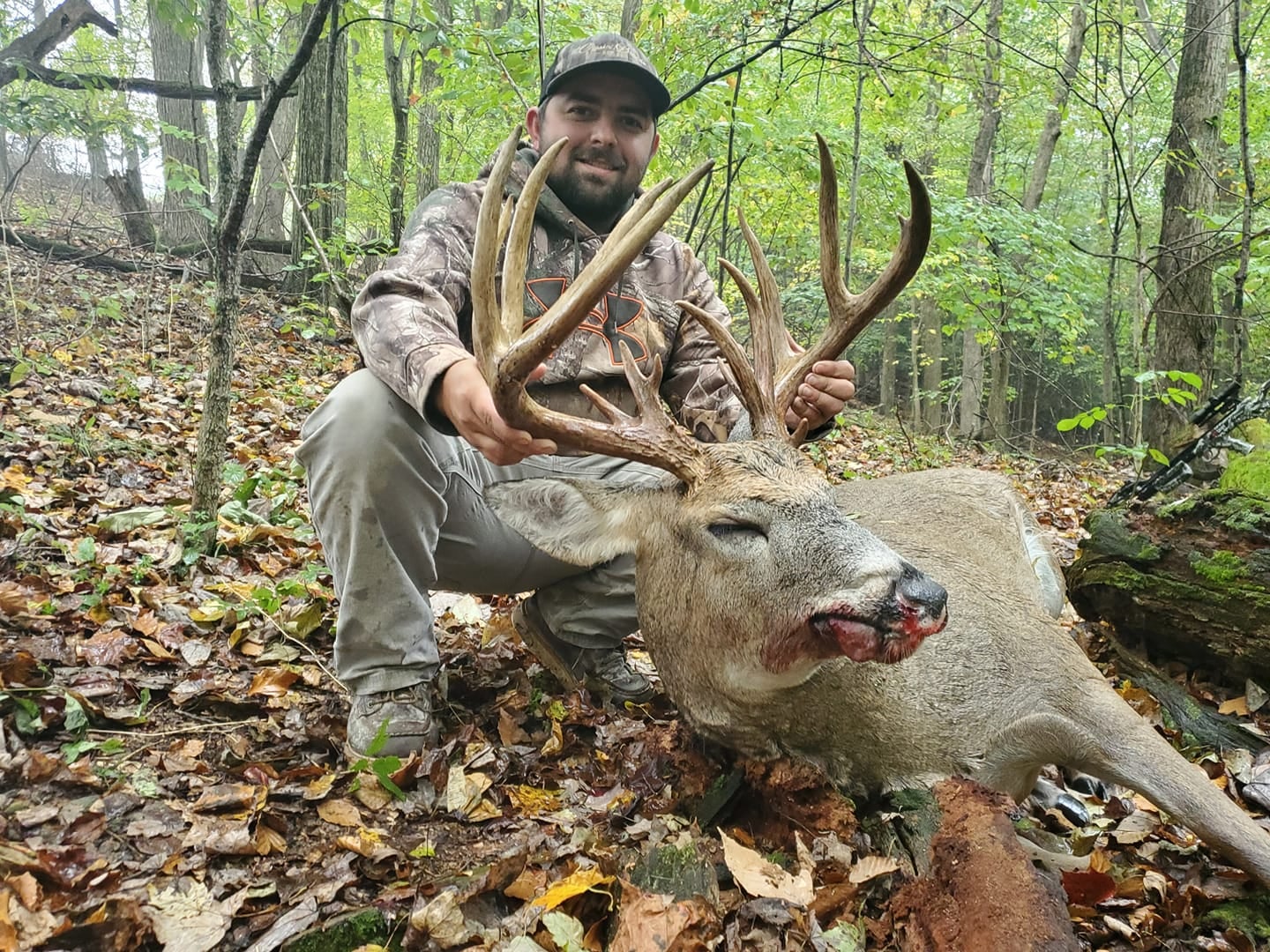 Tyler Roberts’ 26-acre Ohio hunting property doesn’t have much elbow room. But the third deer he’s killed off this small farm—a 180-inch non-typical—is one he will never forget.

“That little place has big bucks,” Roberts says. “At least three other giant whitetails have come from that farm.”

In September, he’d been getting trail camera photos of a heavy-horned buck on his family’s farm in central Ohio. But the deer was mostly nocturnal, only rarely showing during shooting light.

“The place where I got photos of the buck didn’t have any trees, so I set up a ground blind and hunted it twice over a couple weeks when the wind was right, but I didn’t see much,” says Roberts. “I hunted the spot only twice because conditions weren’t the best. I did get one photo of the buck during a late afternoon, but I couldn’t hunt soon afterwards because of work.”

Roberts waited for the right wind direction before hunting the blind again. It was Oct. 19, and a cold front was moving in.

“I got into the blind after work about 5 p.m.,” says Roberts. “The buck had been traveling from a hillside bedding area to feed in a corn patch and on acorns falling from oaks. I set my ground blind along that travel path of his.”

Roberts didn’t see much until a string of nine does came out of the bedding area to feed.

“After a few minutes a few of them got jittery and ran off about 40 yards and starting snorting,” Roberts says. “I thought they caught my scent, and I got pretty mad at myself for making such a mistake.”

Roberts though maybe he had blown his chances of shooting a buck, and dozed off for a few minutes in the blind.

“I opened my eyes after five minutes and looked to a hayfield, then looked up to a hillside with timber and I could see a heavy buck rack whacking a tree,” Roberts says. “I couldn’t see the whole deer or his head, just the rack, and he really worked that tree over for about 10 minutes. I finally got a good look at the deer’s rack, and I knew it was him because of his triple brow tines on each side.”

The buck started down the trail toward the corn and acorns. Twenty-five yards from Roberts’ blind the buck turned his attention to the does.

The buck was slightly quartering toward Roberts when he got his crossbow on the buck’s shoulder and squeezed the trigger.

The arrow shaft only got about six-inches of penetration, as it hit and deflected into the buck’s rib cage. He watched the deer casually walk away back into the timber. His lighted nock was sticking out of the deer so he could see where it traveled for quite a ways.

Roberts backed out and returned that night with family members. They found a blood trail leading into the timber, and the crossbow bolt. But the trailed ended, and the deer was not found.

Read Next: Is Ohio the New Best Whitetail Hunting State?

Roberts returned the next day with a tracking dog, but still no deer. He left the farm feeling dejected, but hopeful the buck had survived. Fortunately, Roberts’ father-in-law Tim Garee continued to search for the buck and and found it dead 250 yards from Roberts’ blind. There was no blood trail leading to the deer.

The buck is a main-frame 8-pointer, with 15 scoreable points—including triple-branch brow tines on both sides. It was green-scored Oct. 25, using the Buckmasters system, with a gross non-typical tally of just over 180 inches.