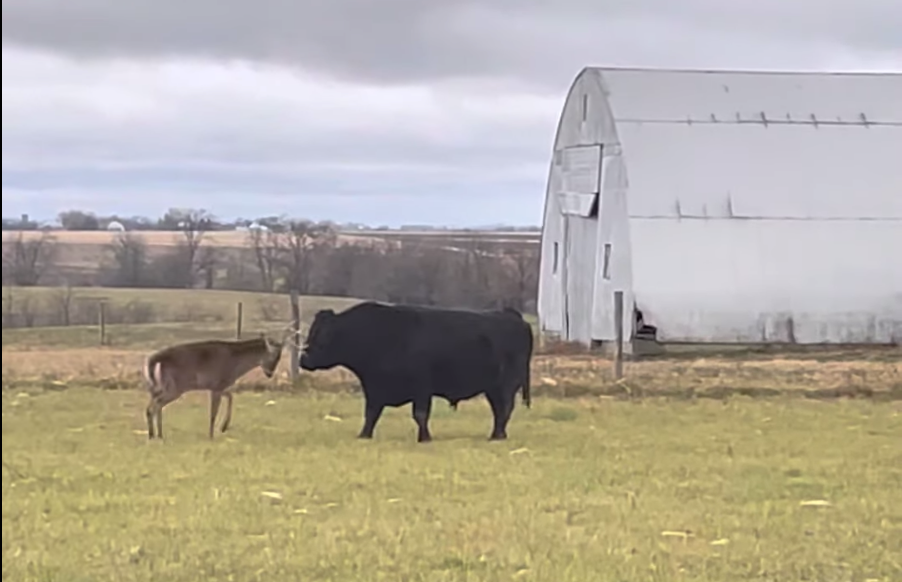 A whitetail buck squares off with a bull. Hunter Weber
SHARE

For millions of American hunters, the sun rises and sets on whitetail deer. We think about buster bucks year-round. Right now, those whitetail bucks are growing antlers and hanging out in bachelor groups. But when the days get shorter and their antlers harden, bucks break from their groups. Deer that had hung out together all summer become rivals. And once the rut kicks in, whitetail bucks are known for epic fights, sometimes to the death. But as it turns out, they’re willing to fight other critters too.

One of the great things about today’s social media boom is that folks from all over the country are capturing incredible whitetail behavior and posting it for the world to see. Many of the videos are astonishing, even to veteran deer hunters.

YouTube has a wealth of videos capturing whitetail activity that must be seen to be believed. So to celebrate aggressive whitetails and all the weird things they do, I’ve compiled a few of the wildest videos out there.

Titled simply “Buck vs Bull,” this video was recorded from a vehicle in late November, 2020. The 1-minute, 13-second clip shows a rutting buck with a swollen neck walking stiff-legged and sideways toward a large black angus bull. Anyone who has successfully hunted mature whitetails with a buck decoy has seen this exact same posture. Whitetail experts say that bucks angle toward a rival in this manner to make themselves appear bigger.

The bull is many times the size and strength of the buck, but the deer is the aggressor as the two go nose-to-nose time and again. With his sharp tines, the buck seems to get the better of the bull as their sparring match continues in the barnyard. Finally, the bull breaks off the encounter and slowly moves away.

Another crazy rutting buck video was recorded in southeast Texas in late November 2017. This video has been posted on a few different pages and has earned more than 6 million views. It’s titled “Ram vs Buck and lasts only one minute.

The scene is recorded at a deer feeder, behind a high fence at Tierra de Dios ranch, with does and a massive South Texas buck browsing. Suddenly a muscular, full-curl white ram shows and immediately challenges the deer.

The ram charges and butts heads with the buck, using its powerful shoulders and neck to plow into the deer. But the buck’s rack is wide and formidable, and he’s plenty powerful, too.

They muscle each other around for a few seconds. Then the buck uses its rack to wheel the ram around, jabbing it in the haunches with its tines. The ram starts to flee and the buck pursues, flipping it over once.

The ram scrambles to its feet, and beats a hasty retreat, with the buck chasing it, hell bent to drive its rack into the ram’s hams. You can hear the videographer whisper “what the hell?”

This video isn’t about a rutting buck, but I had to include it anyways. This clip, which has 2.2 million views, was taken from a remote camera in Nordic Mountain Country Park in Wisconsin. The video shows a small field bordered by timber, where a hawk jets down and nabs a rabbit in the grass.

The rabbit begins squealing as the hawk takes care of business. That’s when a doe whitetail runs onto the scene, presumably after hearing the rabbit squeals, which sound similar to a fawn in distress. The video was made in June 2021, when does would still be protecting their fawns.

The doe uses its front legs to repeatedly stomp the hawk, which quickly releases the rabbit. It’s difficult to see the doe smashing the hawk, but the damage is telling as the bird never flies, and the doe never stops her assault.

At one point another doe rushes onto the scene, only to be run off by the first doe, who then returns to the hawk, continuing her assault on the beaten raptor until it’s obviously dead.