Wisconsin Hunters Pass on Locked-Up Bucks, Use Angle Grinder to Free Them

After finding two bucks with their racks helplessly tangled, the hunters decided to free the deer instead of filling their tags 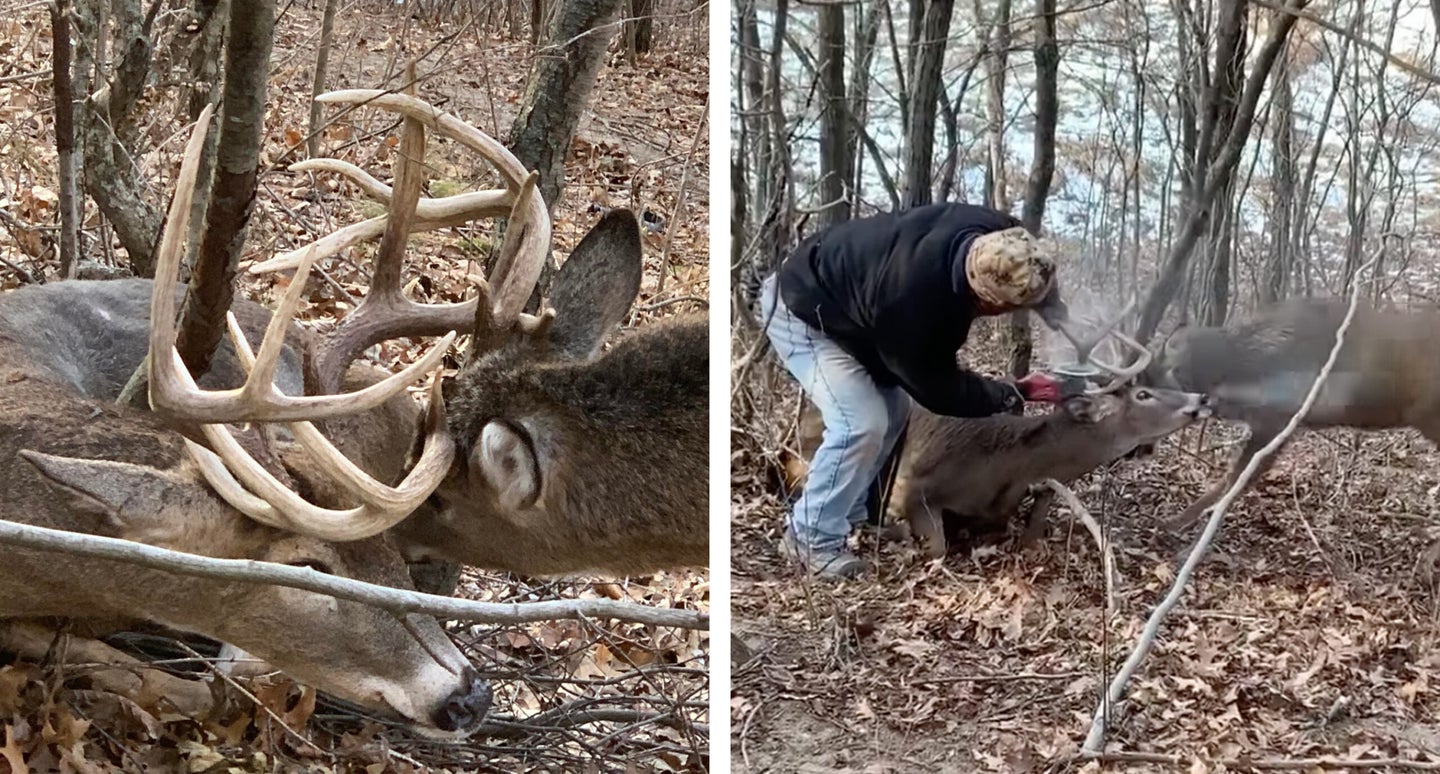 The hunter used an angle grinder to cut an antler off each buck and set them free. Troy Rebarchek, via Facebook
SHARE

Two deer hunters in Wisconsin saved a pair of rutting bucks from a slow and almost certain death this deer season. After a tip about two nice 8-pointers that had locked their racks together on their property, landowners Troy Rebarchek and Tami Keenan considered tagging them. But fair-chase ethics won the day, and Rebarchek was able to cut away enough of their racks to set both bucks free while his wife, Keenan, filmed from a safe distance. The incident happened just before Christmas, but the video has been gaining traction on social media and local news stations this week.

Everett Sluga, 90, spotted the deer while driving through farmland outside of Independence, Wisconsin, in late December. Stopping for a closer look, Sluga recognized that the two deer weren’t just fighting—they were locked together. Since deer season was still underway, he decided to let the landowners know about the situation. Rebarchek and Keenan are farmers as well as dedicated deer hunters. When they heard what Sluga had seen, they responded right away and soon found the two bucks struggling in a large, snowy field.

The couple walked toward the bucks, driving the pair into the nearby woods—where the deer got their antlers even more tangled around a small tree. Rebarchek had an arrow nocked on his crossbow, but found himself unable take the shot, writing in a Facebook post that he had one in his sights but “just couldn’t pull the trigger.”

“I just didn’t feel it was right shooting them in the situation they were in,” Rebarchek told WEAU-13 News last week. “It just didn’t feel ethical to me … I looked at Tami and I said, ‘I can’t shoot these deer.’”

Instead, Rebarchek set down his crossbow and grabbed the only tool in his pickup: a Milwaukee angle grinder. He used the tool to cut a main beam off each buck’s rack, plus one tine, and successfully set both deer free.

A video of the rescue itself, which was filmed by Keenan and shared on Facebook by Deer and Deer Hunting, has already made the rounds on social media and racked up nearly half a million views.

Read Next: Wildlife Officers Rescue Bull Moose From a Colorado Basement by Cutting Off Its Antlers

“I’m a hundred percent positive we made the right decision by saving them rather than shooting them,” Rebarchek told the local news outlet, adding that he had since seen the bucks on his property and they both looked healthy.