Missouri Sisters Each Shoot a Buck from the Same Stand, on the Same Day

The girls were hunting with their dad on the family farm when they each took great deer: a nice 8-pointer and a 15-pointer 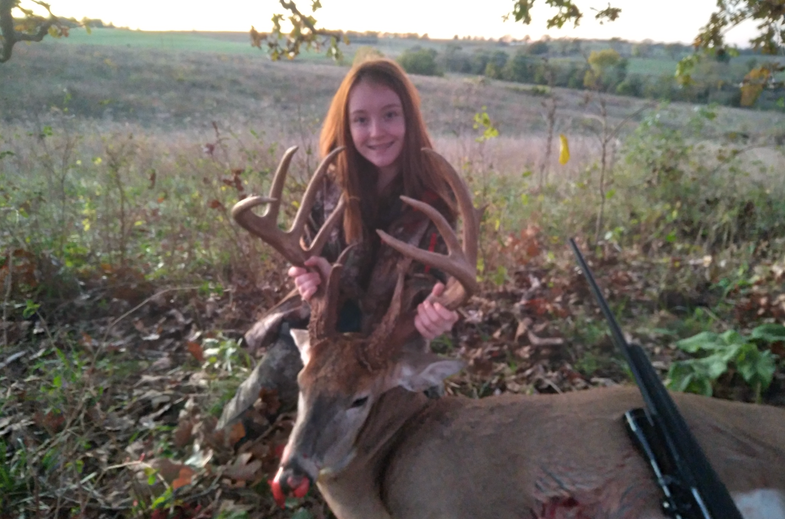 Meranda shot and killed the 183-inch whitetail while hunting with her father on their family farm in Missouri. Josh Gulick
SHARE

A 14-year-old hunter in Missouri tagged an incredible buck during one of the state’s two youth-only deer seasons, which opened and closed the final weekend of October. Meranda Gulick was hunting the family farm with her father that Saturday evening when she shot and killed the 15-pointer.

The big buck would have been enough to make any papa proud. But as it turns out, Meranda’s deer was actually the second buck harvested by one of Josh Gulick’s daughters that day. Gulick tells Outdoor Life that his younger daughter, 12-year-old Mackynna, harvested a nice 8-point buck from the exact same stand that morning. Mackynna was shooting a .223, he explains, while Meranda was using a 7mm-08.

He says their double-man treestand is situated on the edge of a wood line, and “during the rut it seems to be a pretty good spot. They move in and out of there a lot, and work down the cut in between the timber and the fence.”

“We were sitting there a little while after daylight,” Gulick says, referring to the morning hunt with Mackynna. “I looked up and a doe was coming down the fence. There was a big-bodied deer behind her, and when he lifted his head, I could tell he was a great big one. I told her to get ready, but he never stopped. He just ran her right in the timber and we didn’t see him again.”

“Well, she ended up shooting a little 8-pointer,” he continues, “so that evening I told my oldest we’d go back over there.”

Gulick didn’t expect to see the big buck again, which was a deer he had never seen before that morning. But after sitting in the tree stand that evening for a few hours, the deer reappeared. For 14-year-old Meranda, who has already taken three bucks during her short hunting career, that was the only window of opportunity she needed.

Read Next: Kansas Hunter’s First Ever Archery Deer Is One of the Biggest Bucks of 2021

Gulick says the big buck was trailing another doe, but it wasn’t until the doe hopped the nearby fence that the buck moved out of the timber.

“He just couldn’t take it anymore. He stepped out, and I guess he smelled where we’d walked in because he blew and bounced twice.”

After the buck jumped back that second time, Meranda fired, and the deer ran 60 yards before crashing into a big oak tree.

“There was a great big briar patch in front of the tree,” Gulick says. “She went around to the left, and I went around to the right, and she screamed and said, ‘He’s laying there!’ So, I ran up, and about the time I got there, she just melted to her knees and started bawling.”

For Gulick, the emotional scene capped off a terrific day of hunting for the family.

“It was a good day…both of ‘em!” he says proudly. “I mean, the youngest one killed an 8-pointer out of that stand, and then the oldest one killed that big giant out of the same stand that evening…She sure beat all my deer on the wall!”