You Know What Sound Spooks Deer More Than Wolf or Coyote Howls? Your Voice 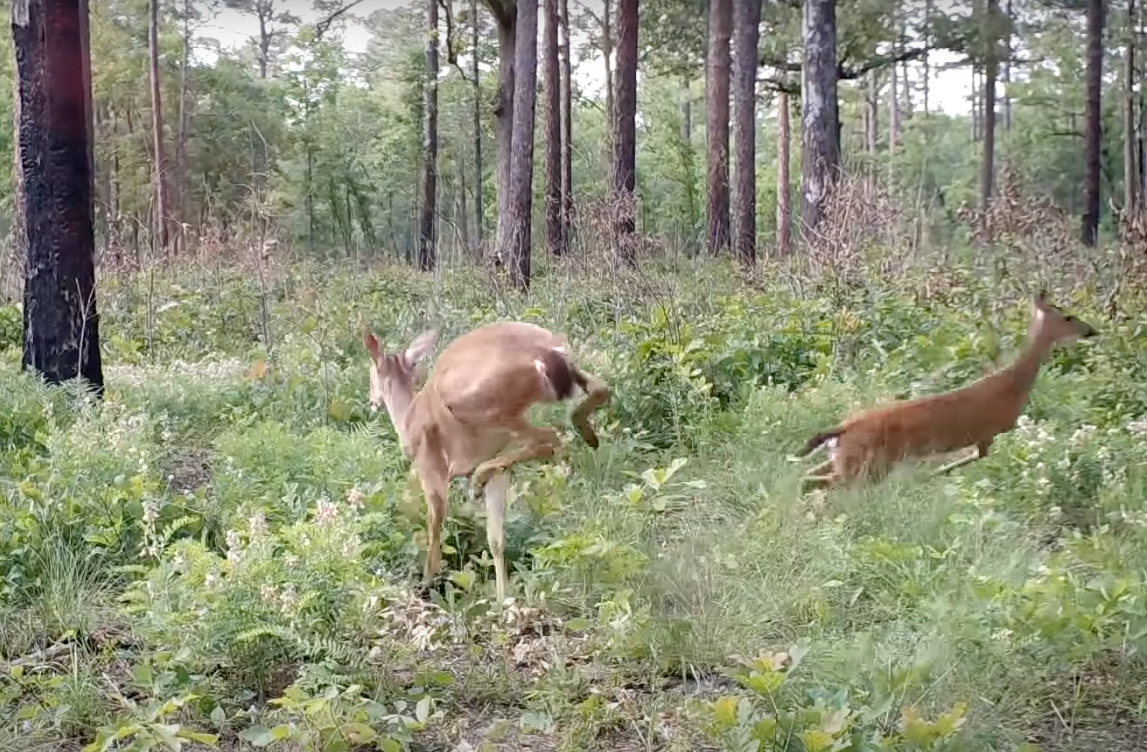 This is what a noisy deer hunter sees: two whitetails hightailing it. National Deer Association
SHARE

We are the most effective predator walking the woods today, and from the perspective of whitetail deer, we are far and away the most feared. This might be common knowledge for most seasoned hunters, but new research out of Georgia makes this fact abundantly clear. The recently published study shows that the sound of people talking is much more likely to spook deer than the sound of any other predator, including wolves, coyotes, dogs, and cougars.

The study took place outside of hunting season for obvious reasons. It was conducted in May and June 2018 at the Jones Center at Ichauway, a 30,000-acre ecological research site in southwest Georgia.

“As a biologist I focus largely on deer behavior,” lead author and bowhunter Dr. Daniel Crawford told Lindsay Thomas of the National Deer Association. “But a lot of that comes from me wanting to be a more efficient hunter.”

Crawford had seen plenty of studies showing how deer change their habits when predators like coyotes are around. He wanted to see if humans had this same effect, and if so, how it compared with the effects that other natural predators had on whitetails.

To test his theory, the research team set up 23 separate baited sites with trail cameras and audio playback devices. The audio devices shuffled randomly through 64 different audio clips of humans, coyotes, wolves, and dogs, as well as three non-threatening bird species. The trail cameras recorded 20-second clips on each trigger; the audio samples began playing 10 seconds into the video recording. By the end of the study, the team analyzed 823 videos and looked at how deer responded to the variety of sounds that they heard.

The study concluded that “deer were more than twice as likely to flee upon hearing humans than other predators.” Crawford clarified that these results are “context-dependent,” and explained to the NDA that the study took place in an area that is intensively managed and receives a lot of pressure from deer hunters on any given year.

“We are in an area where there’s a heavy emphasis on deer harvest, and there are a lot of deer killed every year by people,” Crawford said. “In hunted places, I expect deer are going to behave like this.”

One thing the study showed that Crawford didn’t expect, however, was that whitetails are still deathly afraid of wolves, even though there hasn’t been a wolf in Georgia in decades. According to the data collected in the study, wolves were the second-most feared predator behind humans, and were more likely to scare deer than coyotes, which are abundant in southwest Georgia. Crawford said this was a “head-scratcher” at first, but after giving it some thought, he realized it made perfect sense. Wolves and whitetails co-evolved in North America over millions of years, and before humans showed up on the landscape, wolves were some of the best deer hunters on the continent. The study proved that deer have a deeply ingrained fear of wolves—one that hasn’t gone away in the relatively short time that these apex predators have been absent from the landscape.

The NDA took a closer look at this research and put up a YouTube video showing some of the footage that was captured during the two-month study. The organization also drew some straightforward conclusions.

“So what does this mean for you and your hunting strategy? I think the first lesson is: Shut up,” Thomas says in the video. “If you’re gonna talk in the woods, you might as well give a wolf howl.”