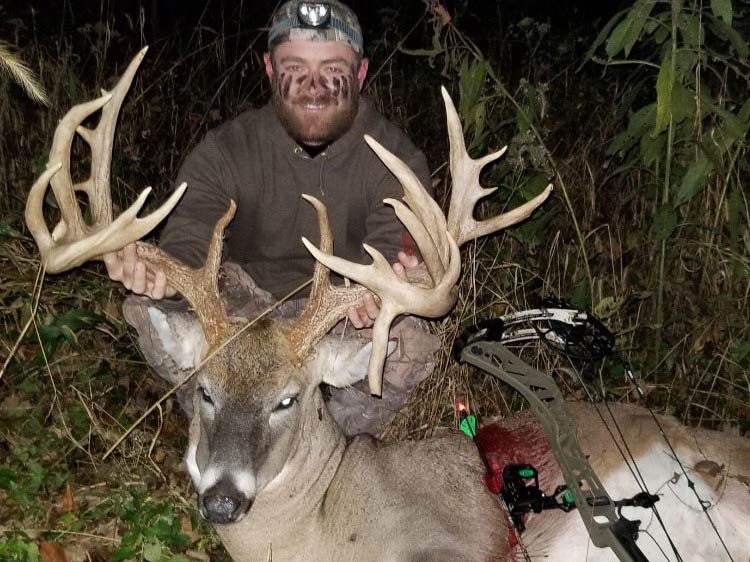 On Oct. 16, Corey Richmond was hunting a local farm in Adams County, Ohio, with one of his two brothers-in-law. It was a month into deer season and Richmond had been waiting for the perfect evening—a cold snap with a north wind—to sit this stand. All summer, he had seen a huge nontypical buck walk into this spot on his trail camera. It came in the same time each evening from July through August. But on Sept. 1, the deer disappeared. When Richmond climbed into his stand, that buck hadn’t shown up on camera for more than six weeks.

He had just shot the biggest (and also first) buck of his life, a 224 3/8-inch whitetail. If the score holds up after the mandatory 60-day drying period, the buck could be the largest deer ever killed in Adams County with a compound bow.

“I hunt the farm with both of my brothers-in-law, and they were happy for me, but also mad,” Richmond says. “I get it. If I were in their shoes, I’d be a little mad too. But we were able to keep it in the family at least.”

It turns out several neighbors had photos of the same buck—which had been a typical eight-point as a 2-year-old—on camera, but everyone was playing that close to the vest. After word got out that Richmond had killed it, the trail cam photos from nearby farms started pouring in. He thinks the buck may have been traveling up to five miles from their property.

On the evening he killed the buck, Richmond, who had only shot a few does before taking this deer, saw some early doe activity. As the evening wore on, another lone doe came walking down an old ATV trail. Moments later, the big buck emerged. Once it walked into the timber about 60 yards away, Richmond knew he was going to get a shot.

“It had done the same thing so many times on my trail cam…there was no doubt it was going to come in range,” Richmond said. “I was actually lucky to have practiced at that exact distance with my bow before walking into my stand, plus I did a lot of work in the offseason because it was a new bow from Mathews, so that really helped me.”

Read Next: A 14-Year-Old Just Shot One of the Best Bucks in Kansas History

The buck paused behind a tree at 40 yards, but the doe was looking straight at Richmond, and he feared she would bust him before he could shoot. Feeling the pressure, he stood and drew his arrow back. A few steps more, and the buck was perfectly broadside. Richmond took the shot. It was perfect, too—right through the heart. The deer didn’t run more than 50 yards, but Richmond waited 30 minutes anyway before climbing out of his stand. He hiked out, and returned with friends and family to track the short blood trail.

“I was shaking pretty badly once I knew he was going to give me a shot, but I was very prepared to make it,” Richmond says. “I really thought that doe was going to screw things up, but she never gave me away.”

There are still two more 170-plus class bucks roaming the woods on the southern Ohio farm Richmond hunts. Of course, he can’t shoot either of them this year since Ohio allows just one buck tag per hunter, nor would he care to after shooting a deer both his in-laws were after.

“Even if I had another tag, I wouldn’t shoot either of those deer if they walked right under my stand,” Richmond says. “My brothers-in-law would kill me.”