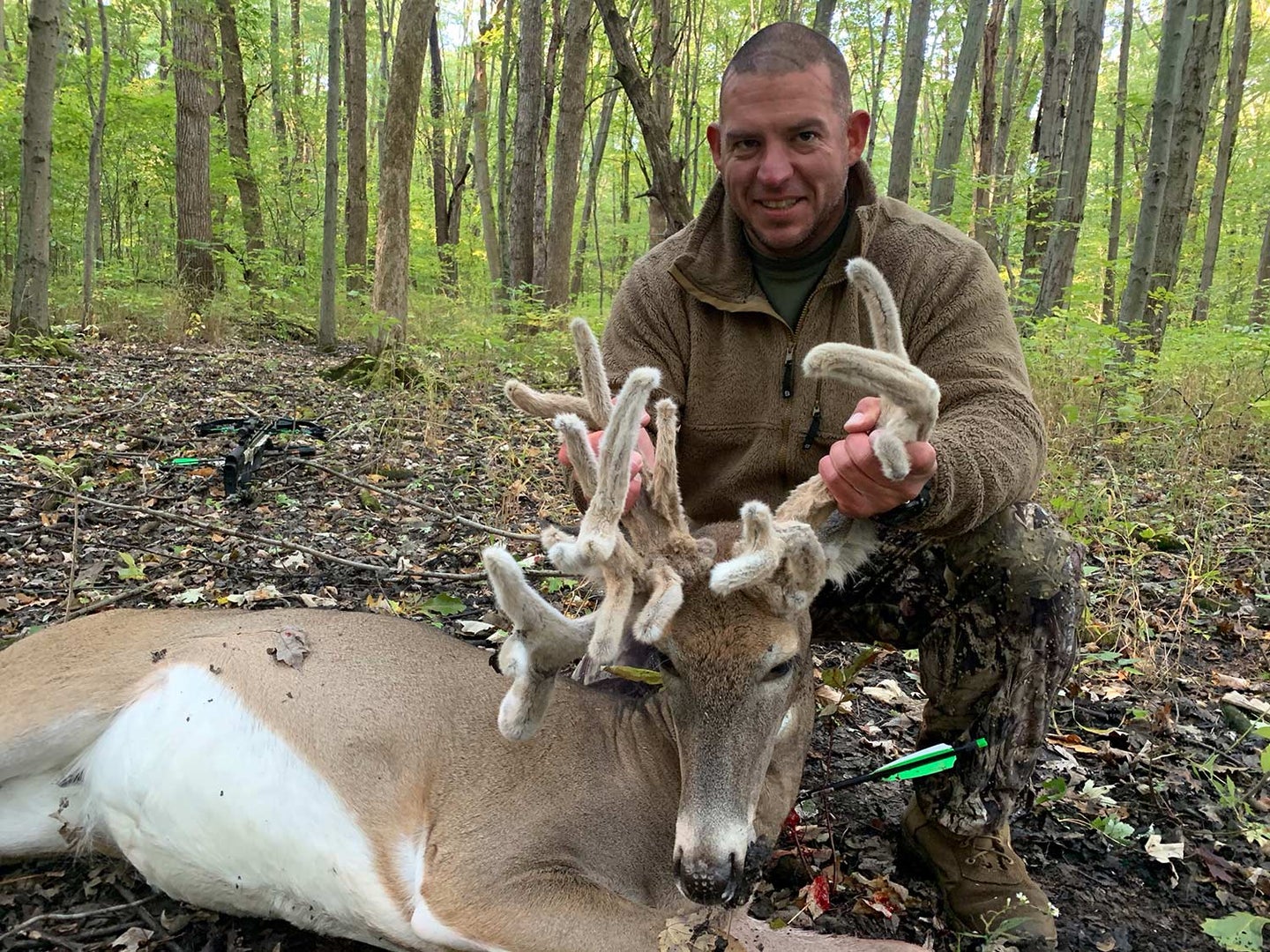 When you talk about world-record whitetail deer you don’t normally think about does. However, Michael LaLonde Jr. of Oak Harbor, Ohio shot a velvet antlered doe this fall that is now the world’s biggest, according to Buckmasters Whitetail Trophy Records (BTR). LaLonde’s velvet-racked doe has 22 scorable points—15 points on the right side and seven on the left. The rack scores 191 0/8 inches making it the largest velvet antlered doe in Buckmasters’ records.

But LaLonde didn’t realize the the velvet deer he was hunting was a doe. In mid-September, he moved his ladder stand to a new location in the Ottawa National Wildlife Refuge in Ohio’s Ottawa County. He had hunted the 180-acre tract of land in 2019 when the area was first opened up to public hunting and shot a 2.5-year-old 9-pointer there. But he decided to move his stand near a thick bedding area when he saw a gnarly racked “buck” in velvet. He positioned his stand near the bedding area where two deer trails intersected.

On October 2, LaLonde made his second sit in the stand.

LaLonde likes to get into his stand about 30 minutes before first light, but he saw no deer that morning. He was standing up on the platform of the ladder looking back to the bedding area when he heard something behind him. He turned his head and saw the gnarly velvet antlered “buck” just 25 yards away. The deer was walking in his direction.

“I didn’t want to make a lot of movement and turn my body around to face the [deer],” said LaLonde. “So I carefully grabbed my crossbow and twisted my body to my left so I could shoot in that direction.”

The deer was casually walking with its head down, occasionally stopping and lifting its nose to the air. By now the deer was just 20 yards away and but its vitals were obscured. LaLonde’s only option was a neck shot.

“The deer ran to my left when I shot it and then dropped just 45 yards away,” says LaLonde.

Read Next: 30-Point Illinois Deer is a Doe

He was shaking with excitement and stayed in his stand to compose himself. Meanwhile he texted a couple of his buddies to tell them he had just shot the funky racked velvet buck he’d seen the year prior.

Fifteen minutes later LaLonde climbed down, took a few pics of his deer, and texted them to his friends. One of them saw the pics and asked LaLonde to check to see if the “buck” was actually a doe.

“I was in shock,” says LaLonde said. “I was just blown away and couldn’t believe what I wasn’t seeing.”

Once he gutted his velvet-antlered doe and got it out of the woods, LaLonde met up with Ottawa County’s Wildlife Officer, Reid Van Cleve, who came out to look at the rare deer.

“I was pretty excited to see such a unique deer in person,” said Van Cleve. “I was very happy that such a nice guy like Michael harvested this unique animal.”

It didn’t take long for the news of the big velvet-antlered doe to get around Ottawa County. Several people who were hunting the same deer showed a lot of support for LaLonde and even sent him trail cam pics of his trophy that dated back to 2016.

“That’s one of the best things about [shooting this deer],” says LaLonde. “The support that I was shown from fellow hunters was phenomenal.”

LaLonde currently has the rack at a taxidermist who estimates the deer to be at least 6.5 years old.

According to Michael Tonkovich, Ohio’s deer biologist, velvet-antlered does are a rarity most of the time but this year, three of these incredible whitetails were taken by hunters in the state.

“It’s been a crazy year for Ohio deer in 2020,” says Tonkovich. “I’ve been at this job for 26-years and maybe get one report of an antlered doe every other year, but this year we had three.”

According to Tonkovich, the big difference between LaLonde’s doe and the other two is that his doe has multiple years of antler growth on its head.

A velvet-antlered doe like LaLonde’s has a hormonal imbalance that causes it to continue to grow its antlers in the spring (they do not shed them). The antler growth is initiated by a burst of testosterone which could come from the doe’s adrenal glands. Antler growth continues through summer. In a normal buck, as the days get shorter, testosterone levels rise which triggers the antlers to harden. Then the rubbing process begins and the buck’s velvet falls off.