Deer of the Year: Buzzer Beater 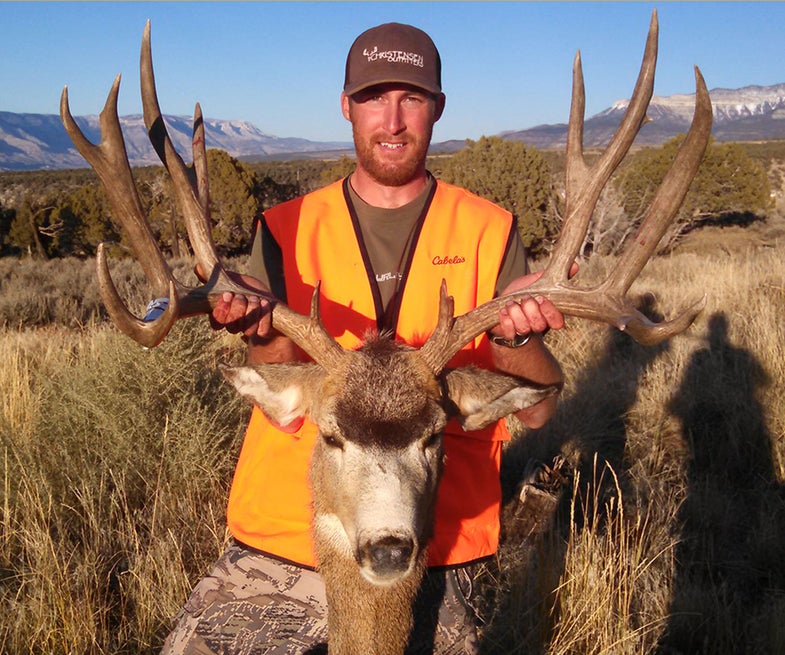 I was a hunting guide for seven years and loved every minute of it, but there’s just something special about being in the middle of nowhere-—on public land, no clients, just your closest buddies—trying to spot-and-stalk a big old muley buck.

It had been eight years since I had been to northwestern Colorado. My family had hunted the region for many years with great success—never a 200-inch deer, but a few 180-inchers. My group arrived two days before opening day to scout, and some of the bucks that we saw were in full rut, with a few non-typicals pushing the mid-180 class. We couldn’t wait for the season to start.

Everything seemed to be set up perfectly. It wasn’t. When the season did open, it was as if someone had turned off the switch. We couldn’t find any of the bucks we had scouted. Our season was nine days long, and by day seven, the pressure was hitting us hard. We had seen deer—25 bucks to be exact—but there wasn’t a mature animal among them.

We all decided to try and hold out. On the last day, we hit the higher elevations. If other hunters had pushed does to higher terrain, the big bucks probably followed. We hiked up the massive mountain to hunt the snow line. I tried to stay positive that this was going to be the day, but first light revealed little deer sign. Then I considered some intel I had gotten from my buddy, Dusty.

He had been hunting elk a few miles from my location and spotted a good buck. For some reason my gut told me I needed to go there. It might have taken me more than two hours to climb that mountain, but I ran down it in 30 minutes. I eventually caught up with Dusty, but there was no sign of the deer.

Last-day hope turned to disappointment quickly. Not wanting to give up, I sat down and started glassing, and within seconds I spotted a doe bedded at 850 yards. A full three hours later, the doe finally got up, and it didn’t take long before a monster buck revealed himself. “I have to shoot from here,” I said to Dusty. It was a shot that I’d have to pull off perfectly.

The doe began to head for thicker junipers below, and the buck followed. I dialed up my scope to its highest magnification and put the crosshairs perfectly on his shoulders—slightly high to compensate for the extra yardage. With a soft squeeze I sent the bullet on its way.

The gun jumped and what felt like an eternity later, we heard the sweet sound of the bullet hitting meat with a whop. It was an agonizingly long walk to get to the deer. Back at camp, we measured him at 31 ½ inches wide with 36 inches of mass. His gross score was 215 inches.