Deer Hunting Tips: When to Move Your Stand

Most deer hunters understand that as Indian summer transitions into cooler, shorter days, a whitetail buck’s attention shifts from feeding... 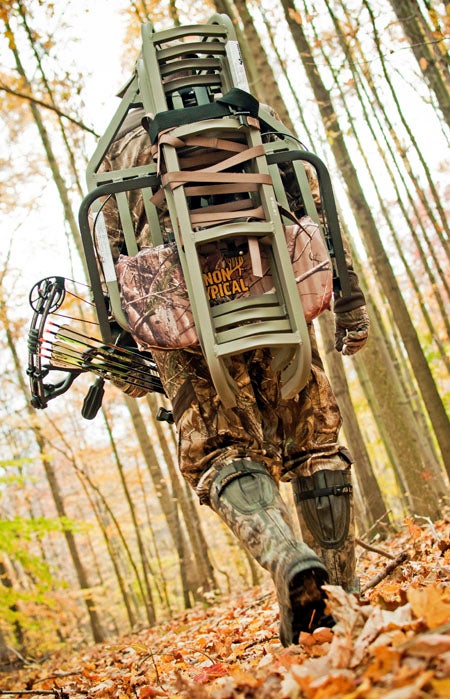 Most deer hunters understand that as Indian summer transitions into cooler, shorter days, a whitetail buck’s attention shifts from feeding to breeding.

Food still plays a role, mostly because that’s where the does will be, as does growing hunter pressure and even changing weather patterns.

Despite this, I’m amazed at the hunters who attach a ladder stand to a tree and leave it in the same spot year-in and year-out, hunting it from the first hot day of September or October right through the bitter end of the season.

To make the most of every moment you have to hunt, note the factors affecting deer movement in your area and use that information to decide when and where to move a stand. Here’s how to make that call.

Get Off the Fields
▶ The beans, peas, corn, and clover of near-harvest agriculture in planted fields and large food plots are a strong afternoon draw for late-summer deer, so it only follows that we center many of our first hunting efforts in these areas as well. A stand hung directly on the edge of a large opening near a spot where deer enter a field not only puts you in a decent position to make a shot on an edge-walking buck, but it also allows you to see over more area than a deep-woods stand permits. And it makes it easy to get in and out of the forest undetected.

If your goal, however, is to score on a bruiser as the rut approaches, then as soon as you spot bucks chasing, scraping, and seriously sparring, it’s time to slip back from the field edge at least 30 to 50 yards. As the rut cranks up and hunter pressure simultaneously grows, big bucks will work the downwind edge of a field just inside the timberline where they can stay protected by cover while scent-checking for ready does or antlered intruders in the field. Many bucks will also stage near the field and linger in the woods during the final moments of light before making an appearance in the open field after sundown. Identify a favored trail or corner bucks prefer to enter from on the usual downwind side of the field–as evidenced by trail-cam photos and the presence of rubs and scrapes–and set your stand a little farther downwind of that trail. The trick is to be deep enough in the woods to cut down the buck’s approach angle.

Funnel Your Odds
▶ On most club properties or leases, stands are generally set up for gun season. They’re placed in open areas or randomly hung along logging roads and trails, where a hunter can see farther. Don’t waste your time with these locations.

As the rut kicks in, it’s time to focus on funnels, particularly for bowhunters because of their limited range, which might be 40, 30, or even 20 yards. Look for points of timber that jut into a field or bottleneck between two open areas, as well as slivers of woods that butt up against a steep incline or that pinch between a wide river and a field. In suburban locations, identify fingers of trees and green space that run between homes that bucks use as prime travel corridors as they take to the hoof in search of does. Fence corners or holes in fences also provide features that funnel deer movement to a predictable spot. These narrow strips of cover promise repeat visits from big bucks at close range as they make their daily rounds. You need to be sitting in one riddled with sloppy, well-worn deer trails, keeping your stand on the prevailing downwind side of the biggest, most well-used trail through whatever thick cover there is.
**
Seek Out Islands**
▶ It can be tricky figuring out the precise spot where a buck will consistently enter a field or clear-cut, but you can bet if there is a brushy ditch, uncut patch of cover, single tall tree, or cattail slough jutting into–or standing in the center of–the open terrain, an exposed buck will angle in that direction. I witnessed numerous bucks in a young clear-cut on my property over the past two years that, no matter where they entered the open area, virtually always walked within bow distance of one or two downed trees with brush around them or along a slough littered with stalks of reeds and cattails. They’ll cut through these open areas much more frequently than they’ll walk the edges, making a ground blind near one of these spots or even a chair simply tucked into the cover a high-percentage sit.

Bucks checking scent in the open will seek the comfort of having cover nearby should they need to get into it, and a lone tree or isolated patch of brush serves as a navigation point for both does and bucks alike. Never hang a stand in a lone sentinel tree unless it is amply leafed out, otherwise a buck will spot your silhouette. It’s better to put a blind at its base, brush it in, and wait four or five days to allow deer to get used to the presence of this new object before hunting it.

Adjust for Pressure
▶ Even if the firearms opener is still a couple of weeks away, it’s likely more gun hunters are in the woods suddenly scouting, hanging stands, and roaming around in trucks and ATVs. All of this will serve the same purpose: to drive monster bucks into deep cover. You need to be there, too.

Before the season, locate the thickest, most tangled patches of briars and honeysuckle, overlapping blown-down trees, brush-choked ravine heads, and overgrown islands in the middle of a swamp. Hang a high stand from which you can shoot into the middle of the cover. Then cut a path to the stand, and clear it of leaves so you can silently access the location. (In the swamp, be sure you can get to the stand from the water using hip or chest waders.) As soon as the pressure turns up and bucks disappear, hunt these spots all day when the rut begins to peak. Odds are you’ll catch a bruiser slipping in or out at some point in the day where you might not have seen him otherwise.