From a national perspective, whitetail hunting and management seem to be at a crossroads. Not too many years ago whitetail... 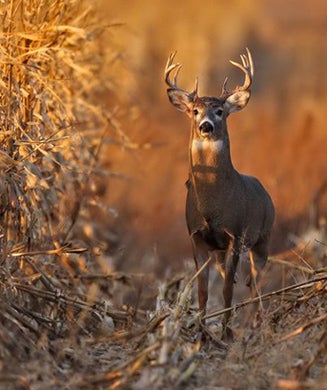 From a national perspective, whitetail hunting and management seem to be at a crossroads. Not too many years ago whitetail powerhouse states like Wisconsin, Alabama, and Nebraska were seeing all-time record harvests (2000, 2005, and 2010 respectively) and the Boone and Crockett club had never received more entries. But, now a handful of indicators are suggesting that the deer hunting bubble is about to burst — or maybe that it already has. Increased predator numbers, deer diseases like epizootic hemorrhagic disease and chronic wasting disease, and years of high antlerless harvests have put many deer herds on unstable ground. Hunters from corners of classic whitetail country like Montana’s Milk River and the riverbottoms of Illinois have already seen drastic declines in deer numbers over the last few years. Then, several bad EHD outbreaks peppered the nation last summer and a brutal 2013/2014 winter struck much of the Midwest and Northeast. This could spell more bad news for deer hunters this season.

But, it’s not all doom and gloom. We’ve never known more about deer biology and management than we do today. Game agencies using strong science and working with educated hunters utilizing proven management methods could help us avoid a deer depression. And in some ways, this process is already in the works. Last month the Quality Deer Management Association held a national summit that brought together the greatest minds in the whitetail world. The point of the summit was to take the temperature of America’s deer hunters.

And this is where Outdoor Life’s National Deer Survey comes in. We wanted to see how OL readers viewed deer hunting so we could start answering questions about how to manage the country’s favorite game animal. We sent the survey out to online readers, our Facebook fans, friends, and contributors and when the dust had settled, almost 4,000 deer hunters had responded. You can see the FULL RESULTS of the survey and an analysis of some of the more interesting results below. Share the survey with your hunting buddies and use this knowledge to improve your own deer hunting and management.

Where Do You Hunt?

It’s easy to think of deer hunters in two categories: the private land guys and the public land guys. But our survey shows that a large portion OL readers actually fall somewhere in the middle. Another easy assumption is that private land hunters would have consistent seasons year after year while the guys slogging it out on public lands are seeing fewer and fewer deer. But that wasn’t true for our survey respondents: 41 percent of public land hunters said they saw the same amount of deer as they did in the previous year. That number was the same for landowners and essentially the same (46 percent) for the guys who hunt leases.

What Do You Shoot?

This classic deer camp question played out pretty predictably in our survey. Meat hunters made up the largest number of respondents, but the trophy hunters and guys just looking to spend time with friends and family weren’t far behind. These responses varied a little more when we divided respondents by region. The West had the highest percentage of meat hunters (35 percent) and the Midwest had the highest percentage of trophy hunters (26 percent). The South had the greatest percentage (31 percent) of hunters who answered that killing a deer was great, but mostly they just wanted to get in the field with family and friends.

Many blame state game agencies for issuing too many antlerless deer tags and submarining the deer population. But, OL’s whitetail blogger Craig Dougherty has often argued that just because you have a tag in your pocket doesn’t mean you have to punch it. This message was lost on 28 percent of survey respondents. However, whether a person hunts private or public land does seem to correlate with their policy on taking antlerless deer. Public land hunters had the highest percentage of “fill every tag responses” at 31 percent while lease hunters had the lowest at 20 percent. Landowners and lease hunters tied for the highest number of “self regulators” both at 33 percent while public land hunters were the least likely to self regulate (20 percent).