After nearly four months of work on Noah’s Farm, I figured it’s time for a little update on how the... 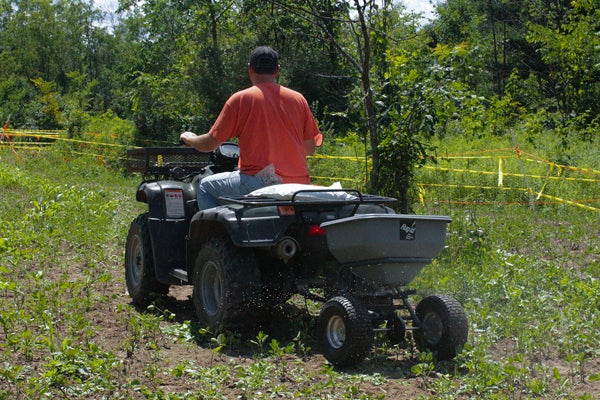 After nearly four months of work on Noah’s Farm, I figured it’s time for a little update on how the work is coming along, and unveil a few of the results of the work that’s been completed.

First, a bit of a recap.

Late last summer, I bought 17 acres of vacant land in southern Michigan. The ground, best I can tell, has never been farmed. It’s an interesting mix of topography consisting of roughly 30 percent standing timber, 40 percent upland-like habitat and the remaining 30 percent in scattered brush.

Because I bought the land just a few weeks before deer season last fall, there wasn’t any time to do any real habitat work. Thus, this spring, the work began in earnest with the goal of turning the 17 acres into a deer paradise – all while staying under my allotted $1,500 budget.

Here’s what’s been done thus far and an update on the status of the project:

TREES AND SHRUBS
I planted somewhere around 350 trees and shrubs. I’ve planted plenty of trees and bushes before – but they’ve been primarily of the “honey, don’t you think the yard would look nice” variety.

The property lacks bedding and security cover. The trees and shrubs I chose were of varieties that can create both over time – highbush cranberry, American hazelnut, silky dogwood and the like.

The trees and shrubs were planted as bare-root seedlings. I wasn’t sure what to expect in terms of survival rate.

But I’m happy to report that nearly 100 percent of the shrubs are not only alive but have doubled in size and seem plenty healthy. The cranberry and hazelnut bushes, in particular, are doing exceedingly well.

The same, however, cannot be said for the conifers. I planted about 50 each of Douglas fir and red pines. All were doing well and looking good. Until two weeks ago. For whatever reason, every one of them has died. Well, I can’t say they’re dead for certain. But they are as brown as a water-starved lawn. And while I may not be Mr. Green Jeans, I suspect that means bad things.

HINGING AND CUTTING
The property doesn’t have an abundance of timber. And, unfortunately, much of what is there is dead, a victim of the emerald ash borer. As soon as the snow left, I was in the woods with chainsaw in hand. The goal was to fell as many of those dead ash trees as I safely could. Getting them down would serve two purposes: First, it would help to further open the canopy and allow new growth on the forest floor. Second, it would eliminate a lot of worries about one of those dead trees deciding to fall when my kids were in the woods.

It was a ton of work but I ended up removing about 25 trees.

While I was in the woods and the saw was warm, I also hinge-cut another two dozen trees in strategic spots to help create areas of thick cover for bedding and security.

Both tactics seem to have produced acceptable results. The woods do seem much thicker than before – though it’s hard for me to judge until the leaves come off because I simply don’t have much history with the property during the summer months.

The hinged trees are still sporting leaves and twice I’ve jumped deer out of the area – deer I suspect were bedding in the thickets.

PLOT PREP
With the trees and shrubs planted, I turned my attention to clearing areas for food plots. But my “plots” aren’t what you might expect. They are actually travel corridors meant to “steer” deer around the property in a manner that allows me to effectively hunt such a small parcel.

In fact, I only have one plot that would fit a traditional description and that’s a half-acre patch of soybeans that I’m hoping to protect from browse pressure until mid-November. More on that in a bit.

The reaming plots are narrow, long and wind through the property in a manner that connects bedding areas to transition areas.

None of the travel plots will be planted for another month or so. There’s simply not enough acreage to create a food source that will last very long under moderate levels of browsing pressure. So I intend to plant the plots in a manner that provides drawing power during the key months of September, October, and November.

What about late season? That’s where the soybeans come in. But to make sure there are beans available in December, I knew I’d need to keep deer out of them until then.

And since I’m nearly halfway through my $1,500 budget, I knew a commercially-made fence wasn’t going to happen. So I tried to create my own dual-perimeter fence.

The results, thus far, have been mixed. My first attempt, which used plastic contractor’s flagging was a flop. The material was simply too puny. Within two days, it sagged under its own weight. So I replaced it all with yellow caution tape.

The yellow tape has proven to be much more durable and effective. There are still some signs of browsing but I suspect that occurred prior to replacing the fence material. My trail camera has captured just one deer in the beans in the past two weeks.

Last week, I installed a simple utilization cage. I’ll report back on the results.

SCREENING AND COVER
When sowing the soybeans, I also planted several areas and patches with a screening blend of Egyptian wheat and sorghum. I’ve read about this tactic often over the past several years but had never tried it.

And, thus far, I’m less than impressed. I can’t tell if any of the wheat has taken. There is plenty of growth but it looks an awful lot like corn – and since sorghum is in the corn family, I’m guessing it’s sorghum. It’s been in the ground for about five weeks now and is not yet knee-high.

Last week, I fertilized the soybeans and also the screening patches. My hope is that nitrogen boost will get the screen growing. It’s possible that I seeded the cover mix too heavy and that could certainly stunt its growth.

WHAT’S NEXT
That’s a good question. It’s sort of a strange point in the summer. It’s too early to plant fall plots. Too late to do some of the things I never got around to (like trimming apple trees).

But I do need to get stands in place and come up with a plan for entry and exit to each. With just 17 acres to work with, it’s vital that I hunt the area with as little impact as possible.

So I suppose that’s the next job. I know as soon as I strap that first stand to a tree and sit down to admire the view, I’ll realize that deer season is just a few weeks away.

And I can’t wait to see if all this work pays off.