“Oh my gosh, what are we going to do here?” These were Mike Chamberlain’s first thoughts as a dark-horned Minnesota... 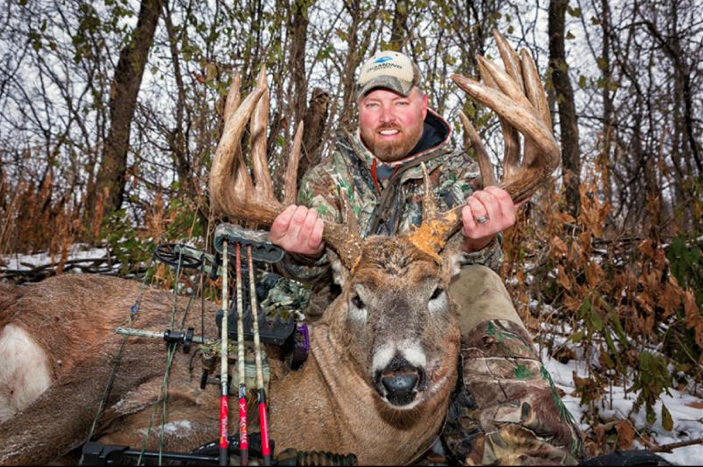 These were Mike Chamberlain’s first thoughts as a dark-horned Minnesota monster of a whitetail stepped into view in November 2014. And with 196 inches of antler moving my way, I probably would be thinking the same thing.

That afternoon Mike had gotten out of work early and snuck back onto his hunting property with just an hour of daylight left. I wast going to be a quick hunt and he didn’t have terribly high expectations, but he did know there was a special buck in the area. The year before on this property he caught sight of a beautiful buck, and he’d been able to snap a few photos. In 2014 that same buck returned, but he was much bigger, and now showing up on trail cameras too. Unfortunately, it seemed the buck was only moving under the cover of night.

That all changed on November 13 though. Not five minutes or so after climbing into his stand, Mike heard an approaching deer, and he watched as a small buck meandered down a popular deer trail and right into shooting range. Mike wasn’t going to shoot, but he noticed the little guy kept looking nervously over his shoulder behind him. And when he followed the young buck’s stare, he saw a wall of antlers coming over the ridge.

“I started shaking right away,” recalls Chamberlain, “But then I remembered the hunting shows I’d watched growing up and I remembered Stan Potts saying that once you decide you’re going to shoot a deer, do not look at the antlers anymore and just focus on the shot. Well I knew that’s what I was supposed to do, but I still found myself having to check every once in awhile. It was like, are those really on his head?”

From the moment that Mike first saw the giant appear over the ridge, he had to wait nearly six minutes as the behemoth slowly made his way down the trail. Luckily the path he was on would lead right past Mike, and the wind was perfect too. Finally, the deer made his way in, stepped into a shooting lane and paused.

“When I try to think of specifics, it’s almost as if I blacked out,” said Mike, “there was so much adrenaline, it’s hard for me to remember every single step. But I remember going to full draw, thinking he was at 16 yards, picking the right pin and then when I released, I remember seeing the arrow punch right through him.”

The giant bounded off, but then stopped at 28 yards and just stood there. Expecting the buck to fall over at any moment, Mike watched the buck continue to stand seemingly unharmed, and then quickly nocked another arrow and let another shot off. The second shot struck the buck near the shoulder and he turned and ran off into the brush.

Mike decided to give the buck some time, but when he returned to pick up the trail and eventually saw the deer lying on the forest floor, he knew this was a pretty special moment.

“I don’t even have the right words to describe a situation like that, especially since it was likely a once in a lifetime moment. It was almost surreal. I couldn’t believe this had happened.”

Chamberlain’s buck is eligible for our Deer of the Year program, and so is yours. Upload a photo of your own 2014/2015 buck for a chance to win great gear from Gerber and land your deer on the cover of Outdoor Life magazine.