Photo: John Neporadny Smart,” “spooky,” and “selective” are terms trout anglers often use to describe their target fish. And now... 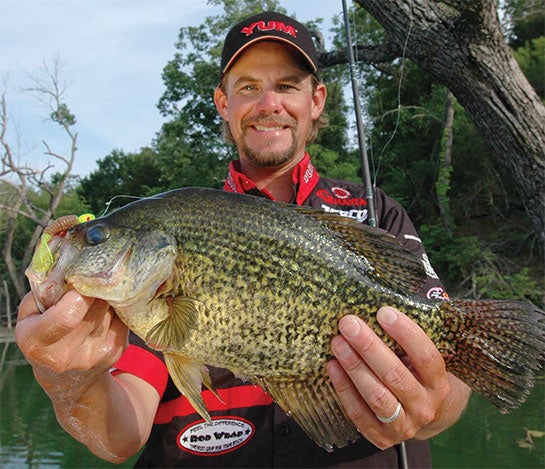 Smart,” “spooky,” and “selective” are terms trout anglers often use to describe their target fish. And now a hardcore band of crappie-fishing experts are uttering phrases such as “matching the hatch” too–but it’s not just emerging insects that they are keying on.

“Here, that means shad,” says Terry Blankenship, a crappie guide on Lake of the Ozarks in Missouri. “It’s simple–you have to throw something that mimics the size of the predominant prey species. If I throw a big bait when the hatch has just been established, I get a lot of fish that just slap at the bait. When I downsize to the size of the actual hatch, that’s when they eat it.”

Smoke ‘Em If You’ve Got ‘Em
Illinois Crappiemasters pro Kyle Schoenherr guides on both clear and dirty waters, and he, too, is a firm believer in matching the gizzard shad hatch in both situations–especially on days when the fishing is tough. His go-to bait is a 1 ¾-inch Midsouth Tackle Glow Jig in smoke attached to a 1/16-ounce Blakemore Roadrunner Pro Series 2 jighead.

“The profile of that bait is really similar to the juvenile baitfish in the [Southern Illinois] lakes,” says Schoenherr, who guides on Kincaid and Rend lakes. “The transparency of the smoke hue gives the lure a smaller profile in the clear waters of Kincaid Lake, and the glow coloring makes the lure more visible for crappies in the dirtier waters of Rend.”

If shad are not the predominant prey species where you fish, take a page out of Oklahoma guide Todd Huckabee’s book. He selects certain sizes and colors of jigs and soft-plastic bodies to mimic the mayfly larvae migration; the shad, drum, and carp spawns, and even spring crayfish emergence.

Crappies may never be mistaken for trout when it comes to smarts, but they should be when it comes to diet. This season, when your crappies get selective, find your inner angler and start keying on recently hatched forage.

When crappies only mouth your offerings, dial in to the size of their natural prey to catch more fish.

2. When Bigger is Better
A 1/8-ounce Blakemore Road Runner jighead matched with a 3-inch Midsouth silver-flake tail has a similar profile to just-hatched shad.