I’ve always wanted to hunt black bear. So when Ralph Seamons of Artic Edge Outfitters offered me a bunk and... 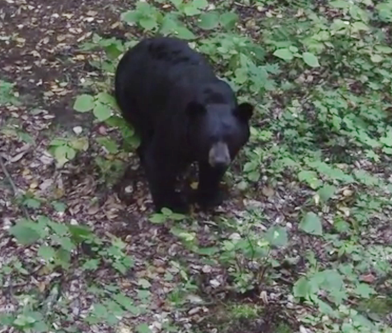 I’ve always wanted to hunt black bear. So when Ralph Seamons of Artic Edge Outfitters offered me a bunk and a barrel the second week of September, I jumped in the truck. After a 2 a.m. start, 12 hours of driving, an hour stuck at the border – “Yes, we are hunting. Yes, it is business.” – and a near-deadly food intake of eggs, Funyuns and rancid gas station coffee, my butt was firmly in the bear stand.

As you can see in the video, it didn’t take long for a bear to show up.

After the double-lung shot, the blood trail, the drag and the butchery, I had been up 24 hours and have rarely been happier. Ralph is the kind of guy you instantly like. During the cleaning and cutting, he stood on the slaughter box, his skinning knife loose in one hand, and launched into jokes you wouldn’t want your mother to hear. Setting up baits later in the week, this 73-year-old carried a 50-pound sack of oats on one shoulder and 5-gallon bucket of grease in his free hand. His lodge is built on Lake Weslemkoon, well known in Canada for trophy bass, and he offered up boats and tackle for the time between bear sits.

The fires were built high. The party went long. It was my first time in a bear camp – and my first black bear. I couldn’t have asked for a better trip.