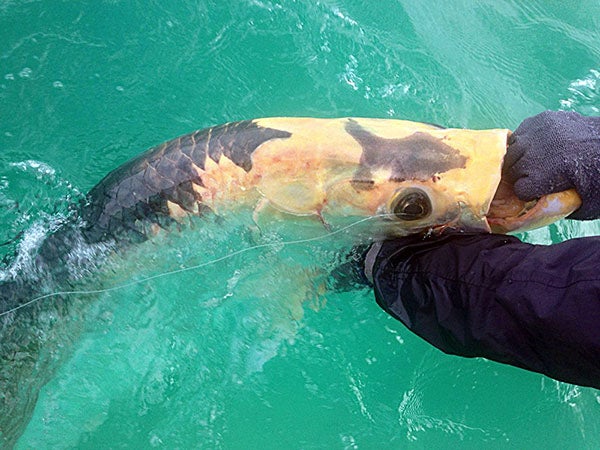 A rare piebald tarpon was caught and released in Florida earlier this month.

Capt. Clark Wright, who runs a charter service on Florida’s west coast, was fishing with a client on June 5 off Anna Maria’s coast when he spotted a strange looking fish jumping and rolling in the water. He said that even from a distance he could see that it had an orange tint and spots.

“In my 20 years of tarpon fishing, I’ve never seen a tarpon like this before,” Wright told Sport Fishing. “I told the visiting angler and my mate that we had to get this tarpon to the boat.”

They went for a closeup and caught the tarpon with a live blue crab around 7:30 a.m.

“We were hooting and hollering,” Clark said. “The angler, George Seibel, might be the luckiest angler out there right now. He came down from New York with his wife and caught this tarpon. We took a DNA sample and successfully released him. He lives to fight another day.”

The latter was news Kathryn Guindon, an assistant research scientist at the Florida Fish and Wildlife Commission’s (FWC) Tarpon Genetics Recapture program, was ecstatic to hear.

“I have heard reports over my past ten years of tarpon like this, but never has someone retrieved a DNA sample to send to us,” said Guindon. “It looks similar to a koi fish.”

Guindon said that the strange looking fish is a piebald, which means it bares spots of unpigmented patterns. In the past this fish would have been labeled an albino.

“In 1936, an ‘albino’ tarpon was caught and recorded,” she said. “It actually hangs in the American Museum of Natural History — it looks just like this one.”