Lloyd Tanner pulled the record-breaking catfish out of the St. Joe River 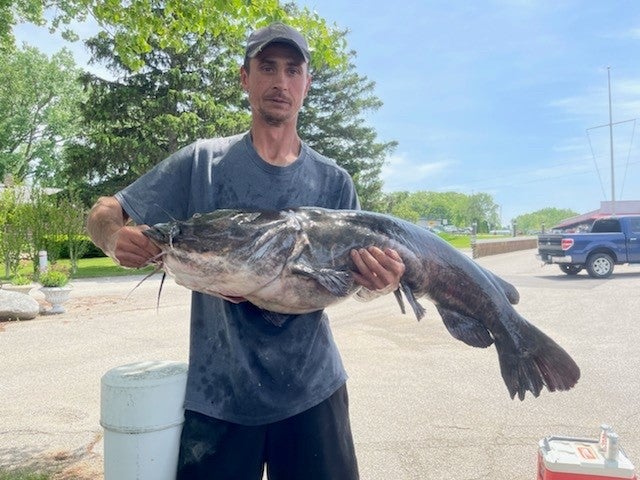 Officials with the Michigan Department of Natural Resources confirmed the entry of a new state-record fish on Monday. The 53-pound, 48-inch flathead catfish replaces the previous record of 52 pounds and 46 inches that was caught through the ice in 2014 by angler Dale Blakley.

Angler Lloyd Tanner of Hobart, Indiana, caught the 53-pounder early in the morning on Sunday, May 29. Tanner was fishing the St. Joe River in Berrien County using cut bait when he hooked the record-breaking flathead, according to the agency.

After he landed the fish, DNR Lake Michigan Basin Coordinator Jay Wesley came out and verified its weight on a registered scale.

Living on the southern tip of Lake Michigan near the Michigan state line, Tanner told the DNR that he’s been targeting catfish in the Wolverine State for decades. The dedicated angler said he fishes there nearly every weekend.

“I’ve been fishing Michigan for almost 30 years,” Tanner said. “What draws me to Michigan is fishing for big catfish.”

Tanner is involved with the Michigan Catfish Anglers Trail, a local fishing club that hosts amateur tournaments in the region. He shared photos of his catch to the club’s Facebook page, writing, “Just give me at least ‘til the Battle of Grand before you guys break it.”

The Battle of Grand amateur catfishing tournament is scheduled for June 19 on Michigan’s Grand River, another tributary of Lake Michigan located north of the St. Joe. The tournament is open to the public, and the first-place team is guaranteed a cash prize of at least $1 thousand.