Henry Winkler is trout fishing in Idaho again, and he's loving every minute of it 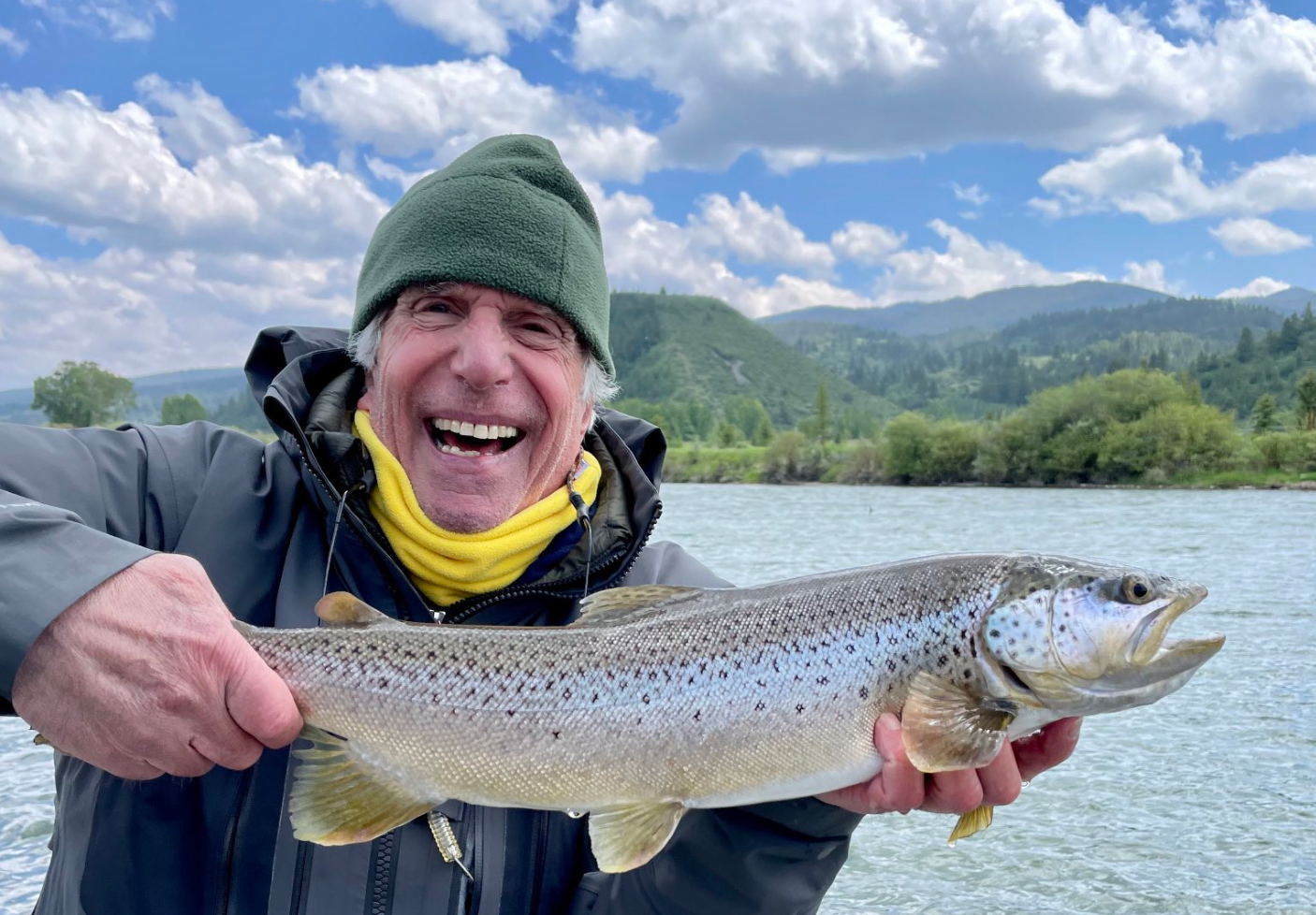 Henry Winkler successfully staked his claim as the King of Cool when he played Arthur Fonzarelli—aka The Fonz—on “Happy Days.” Now the legendary actor is bringing that charisma to the trout streams of Idaho, where he’s landing stud trout, posting phots on Twitter, and loving every minute of it. This is despite getting slammed on social media last year for posting a photo of a trout that he caught and released.

Just one week after his appearance on The Tonight Show, Winkler headed to eastern Idaho’s Swan Valley last Sunday. And judging by his Twitter feed, he was absolutely fired up to go trout fishing.

First, Winkler shared a photo of his waders hanging by the cabin door. The following morning at 11 am, he posted a shot looking downriver from the bow of a drift boat, along with a caption that read: “The first second on the river [in] 2022.” Then, less than two hours later, Winkler posted a grip-and-grin (emphasis on the grin) of his first brown trout of the year.

Winkler posted a couple more photos from the drift boat that afternoon. Like any good fly fisherman, he didn’t reveal the name of the river he was on, but he did give a shout out to Swan Valley. And judging by the photos (sorry to blow up your spot, Fonzie), he was most likely fishing the South Fork of the Snake River below Palisades Dam—which is home to an incredible 5,000 trout per mile.

Life is so good 21 inch hybrid ….Thank You river pic.twitter.com/pHNF5laEjB

The Fonz was back at it the next morning, sharing photos of a rainbow, a 21-inch cutbow (a hybrid between a rainbow and a cutthroat trout), and an 18-inch brown. In each photo, the actor is rocking an ear-to-ear smile that makes it look like he’s having more fun than anyone else alive.

Which might be true. Because over the years, the celebrity-turned-fly-fisherman has become one of the most passionate advocates of the sport. Winkler, who refers to fly fishing as a “washing machine for my brain,” published a book in 2011 entitled I’ve Never Met an Idiot on The River.

Celebrities, Fishing, and the Internet

Winkler also made a trip up to Idaho last May and shared plenty of photos on social media. Unfortunately, internet haters were quick to jump on the 75-year-old actor. They dished out some baseless comments about his merciless fish-killing ways—even though Winkler released every one of those trout. But the comments served to solidify the simple fact that many folks simply don’t understand hunting and fishing.

Looking at the comments on his Twitter feed this year, however, most people are just happy to see the Fonz doing what he loves most:

Winkler, of course, isn’t the only celebrity posting about fishing these days. On Monday, Michael Jordan participated in the Big Rock Blue Marlin Fishing Tournament down in Morehead City, North Carolina. He was photographed back at the dock that afternoon holding a 24-pound mahi.

MJ received an outpouring of love from social media fans as well. More than 250 people had commented on the photo as of Friday morning, and nearly every one of those was positive.

Which is honestly very refreshing to see, because there’s a whole lot of hate out there on the internet, and for some reason, it seems like photos of celebrities hunting and fishing tend to bring out the worst that the Web has to offer. That’s unfortunate for everyday outdoorsmen and women, because we need as much positivity around these sports as we can get. Maybe if everyone could just take a page out of Fonzie’s book—and be a little more like Mike—the world would be a better place.