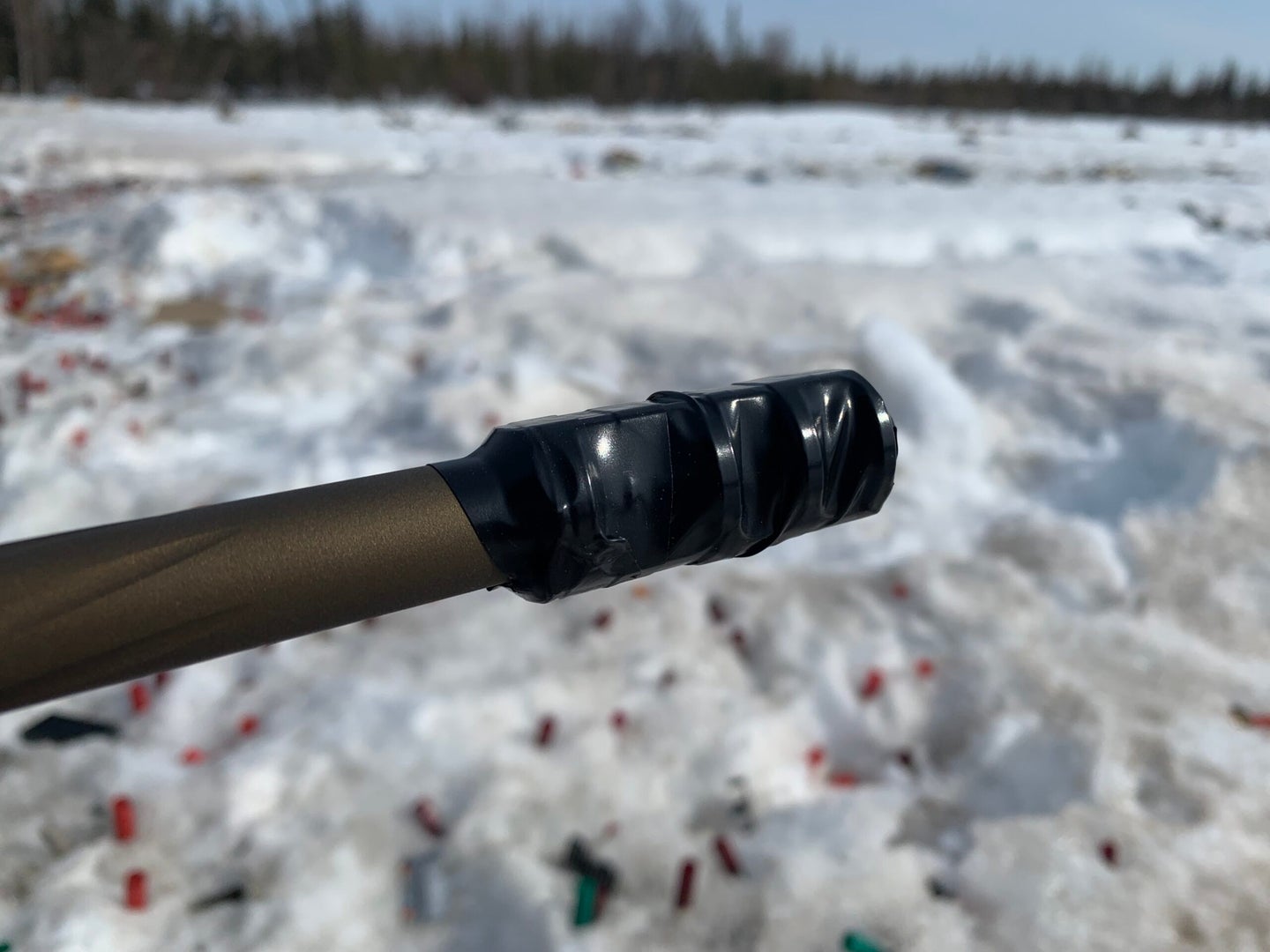 You can seal a muzzle brake with electrical tape and shoot with it on. Tyler Freel
SHARE

In a shooting industry that has gadgets for everything, there’s a surprising lack of variety in options for covering your rifle muzzle to keep out debris and moisture. There are the movie references to using condoms for that purpose, and the only muzzle-specific product I can think of is simply a miniature condom that’s rolled over the muzzle. However, it doesn’t disappoint me to see a lack of effort in tackling this problem. After all, it’s already been solved.

Electrical tape is the best thing I’ve found to keep moisture and debris out of my rifle muzzle. Once I began hunting in Alaska in conditions that were often harsh and wet, I quickly inherited the trick of tightly covering my muzzle with electrical tape. I even keep extra tape rolled around the barrel just in front of the stock. Once I shoot through the first tape, I’ll eventually retape it with the extra roll. As a matter of habit, any rifle I have with me is taped from the time it’s uncased till I shoot. I simply shoot through the tape and cover it back up afterwards.

I’ve killed scores of big game critters with tape over my rifle muzzle and I’ve never had an issue. But still, I hear and read myths about how taping a muzzle can cause accuracy issues. In order to put these myths to bed once and for all, I conducted a simple experiment. I took four of my hunting rifles and shot groups with them taped and un taped.

Debris in a Rifle Muzzle

But before we get to the results of my shoot-off, let’s talk about what happens if debris does get jammed into your rifle barrel. From the earliest stages of our hunting education, we’re taught to keep the bores of our rifles clear of any debris—lest we suffer dangerous consequences. I don’t remember everything from my hunter safety class, which I took in second grade, but I do have some distinct memories from it and one of them was a series of blown-up guns and gun barrels being passed around the class.

Our instructor told of a shotgun barrel that had been peeled back due to only cobwebs—supposedly. Most distinctly, I remember a poorly made video depicting an overweight turkey hunter belly-crawling through the mud, clogging his muzzle, and the video ended in an abrupt whiteout cut. The lesson? Always keep foreign debris out of your bore.

Even small obstructions inside your bore can cause catastrophic results. Your rifle barrel contains a small explosion every time it’s fired, and it’s designed to handle the high pressures of that explosion. But when foreign debris is in the barrel—and isn’t blown out by air pressure before the bullet hits it—it can cause enough of a pressure spike to peel open your barrel in dramatic (and dangerous) fashion.

Even when debris or obstruction isn’t enough to cause damage to your rifle, it can certainly affect accuracy. Simply having moisture inside the bore will affect your point of impact and accuracy, demonstrated in an article by Sierra Bullets Chief Ballistician Tommy Todd in 2016. World War II soldiers were sometimes given condoms to cover their muzzles during amphibious landings to keep saltwater and sand out of their bores, but for a hunting rifle, a bit of electrical tape is all you’ll ever need.

Superstitions About Taping Your Muzzle

It’s normal to at least question whether it’s even safe to shoot through a tightly taped muzzle. If you’ve been taught well, the idea of any barrier directly in or on your muzzle should make you think twice. The distinction though, is that when you put tape over your rifle muzzle, you are not placing anything inside the bore.

More common than safety concerns, is the idea that firing your rifle with tape over the muzzle will affect your accuracy or the point of impact of your bullet. I haven’t encountered anyone who would pick that theory as their hill to die on, but I’ve met plenty who say they either don’t tape their muzzle, or they remove the tape before firing if they can. For some it’s just a superstitious reluctance, others do seem to believe it will affect their point of impact.

The most detail-oriented hunter does have a point here: even the smallest variables can influence a rifle shot. However, most influences are so small that they get lost in the wash in any practical hunting situation. In other words, there’s more variation in your field shooting ability than there is in the smallest environmental influences. Muzzle tape over your barrel is one of those minor influences that will never make an accuracy difference in hunting scenario.

In fact, the bullet never even contacts the tape. The air pressure created by the tightly sealed bullet traveling down the bore blows the tape away from the muzzle long before the bullet ever gets there.

I’ve been a proponent of taping muzzles and blasting right through it for years, and it’s about time I demonstrated that taping your muzzle (and shooting through it) will have no perceptible effect on your point of impact. I brought four rifles to the range for this little experiment: a Savage M25 in .17 Hornet, a Remington Model 710 in .30/06, a Browning X-Bolt Mountain Pro in 6.8 Western with their Recoil Hawg muzzle brake, and a Winchester XPR in 6.5 Creedmoor. I wanted to shoot a variety of calibers and include at least one hefty muzzle break so that if there was going to be a perceptible impact shift, it would show up in the mix.

For this evaluation, I fired two five-shot groups at 100 yards from each rifle at identical targets on the same sheet of paper. For one group, I re-taped the muzzle between shots. For the second group, I fired the group normally, with no muzzle tape. For the rifle with the muzzle brake, I covered the end with two pieces of electrical tape crossed perpendicularly, then tightly wrapped the entire muzzle brake to seal it. I wrapped the other three muzzles with two pieces of crossed tape then a single wrap of tape around the barrel to keep it secure.

After shooting all the groups, I measured each shot’s horizontal and vertical distance from a fixed reference point to triangulate the group center. I then plotted the group centers for both taped and un-taped to determine the difference. I expected some difference because of the sample size. Even with all variables equal, differences will still show up but will slim down as the sample size increases. Here are my results.

Group sizes and group center locations didn’t indicate any trends or notable changes across the rifles and the only real outlier in the group was the Winchester XPR in 6.5 Creedmoor with which I shot uncharacteristically poor groups. It’s outfitted with a 7X magnification scope making it a little more challenging to shoot for precise accuracy testing. A couple of outlying shots certainly affected the group centers, but the shift between the two groups is still within a reasonable margin of human error, considering it’s typically a one-inch gun, and the group centers varied by just over half an inch.

Some shooters will be concerned about taping over a large muzzle brake, like the Recoil Hawg, but in my test it appeared to have no perceptible effect on the brake or rifle’s performance. All the tape was completely blown off the brake with each shot.

Even with one outlier, the average difference between the centers of only 2 groups was slightly over a quarter inch at 0.273 inches. For perspective, if you dropped two .30-caliber bullets onto spots with their points .273 inches apart, the holes would be overlapping. That’s well within the pattern of how groups from those rifles will fall. So tape your rifle muzzles to keep debris out, and go to the field knowing that shooting through the tape is one factor you don’t need to worry about.