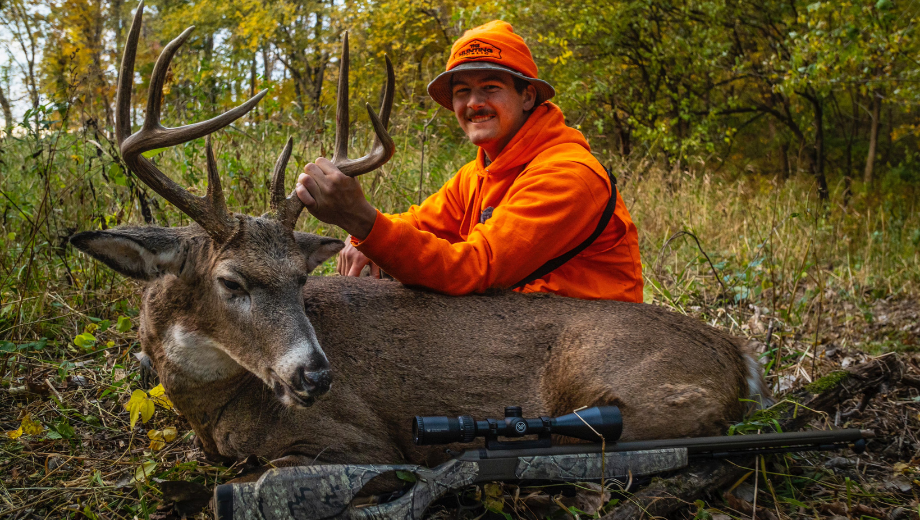 For the ninth stop of The Hunting Public’s Deer Tour, Ted Zangerle and his two cameramen, Greg Clements and Keith Robinson, hit some Iowa public land for the early muzzleloader season. With a cold front on the way, the crew was looking forward to the 9-day season.

Zangerle’s plan was to hunt areas similar to their archery spots. They were on fresh buck sign in those areas, and with big bucks nearby they’d use the extended ranged of their muzzleloaders to hopefully seal the deal.

Use Ridges to Find the Thermal Hub

The season opened on the morning of October 15th, but with the cold front not set to hit until that evening, Zangerle and Robinson made the decision to stay out of the area until that afternoon.

There was a lot of fresh sign, with three big ridges joining and droping into a thick bottom. These ridges allowed the bucks a perfect zone of protection. In the evenings, the thermals push down the ridges into the bottom. If a deer is down there, it can smell anything on the ridges above.

“We had scouted and hunted those ridges with the bow, but had only seen one doe,” says Zangerle. “We knew the bucks were around, but with the warm temperatures so far, we weren’t getting eyes on them.”

The cold front that Zangerle and the crew were planning on had pushed back to the next day, so with the weather taking a turn the next afternoon, they decided to sleep in and get ready for the afternoon hunt.

Stage Hunt Into Your Core Area

They went into the same area as the night before and looped around the three ridges to the far west ridge to scout for sign. They soon noticed a couple of does running off. It turned out the wind was switching to the northwest, so they had to make a move. They decided to swing back around to the east ridge, which took about 45 minutes, then started working down the east ridge toward the bottom.

As they slowly worked the ridge, they bumped about 10 does from their beds. Typically, Zangerle would stop and hunt where he’d bumped a group of deer because bucks are often close by, but that evening he decided to push past the doe bedding area and work farther down the ridge to where he could get a shot into the bottom.

“Most of the time when we’re stage hunting, we’re primarily looking for sign,” says Zangerle. “If we bump a deer, we’ll slowly work up to where they were bedded and decide if it’s worth setting up in that spot. Once we find a hot area with sign and beds, we know we have a good chance to set up and see a few.”

As Zangerle began to set up, he contemplated moving down the ridge a little further to get a clearer shot into the bottom. A few minutes later, Zangerle was making a move toward a tree he had picked out, and right as he got to the tree, he looked up to see a nice buck coming out of the canary grass. The buck was steadily walking and only 50 yards.

Have a Shot Routine

Zangerle quickly got into his shooting position on one knee. The buck was walking at a steady pace, but Zangerle found a small opening and squeezed off his shot. The buck mule kicked and ran about 10-yards closer to the crew before stopping and looking around.

Zangerle had pulled the shot, skimming the underside of the buck’s chest.

Zangerle quickly reloaded and the buck started to slowly walk away, not sure where the danger had come from. After what felt like an eternity, Zangerle was able to reload, and miraculously, the buck was still within range. Zangerle waited for a clear shot, settled his crosshairs and shot again. The buck took off, plowing the ground, and as he went up over the ridge, Zangerle thought he heard a crash.

After giving the buck a few minutes and reviewing the footage, they began tracking and quickly found Zangerle’s buck piled up. Zangerle knew he was incredibly lucky that the buck stuck around to present a second shot opportunity.

“There wasn’t much of a reason for me to rush that first shot, I just got too excited and made a mistake.”

Opportunities on public land can be few and far between, so when you get them, make them count. There often won’t be a second chance.